Paul ‘Bobby’ Stridgeon is a familiar face in the rugby world, especially to those who buy the Lions Tour DVDs, where his famous practical jokes are the stuff of legend. [more] 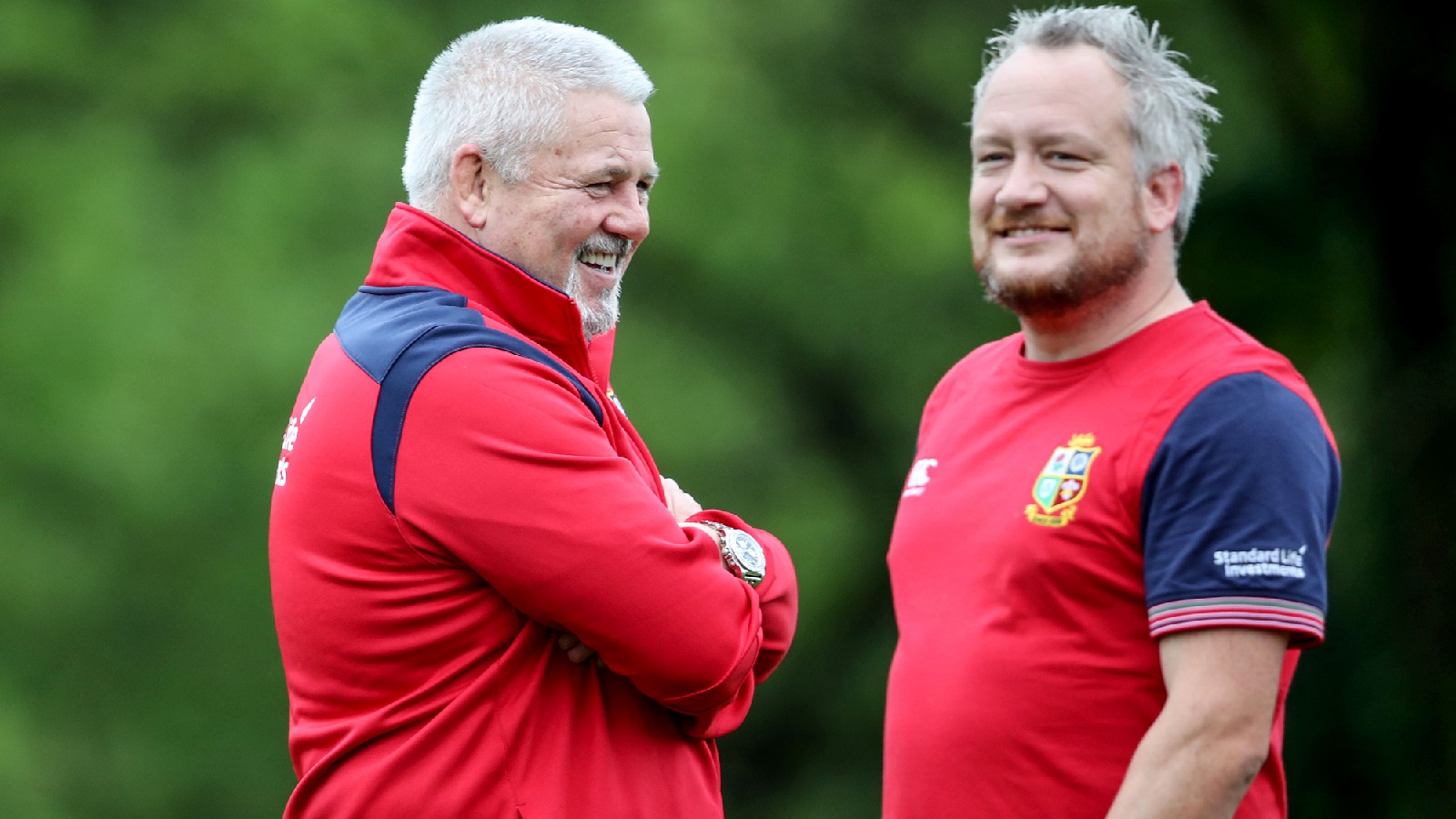 “They moved the jokes to the extras DVD,” he says with a characteristically mischievous look.

“People rang me and said, ‘where are they?’ People aren’t always bothered about watching team meetings. I’m going to tell them, that needs changing.” From his ‘Through the Keyhole’ videos, to embodying the Tour mascot, wherever there is laughter on a Lions Tour, Bobby is never too far away.

Bobby, a nickname based on Adam Sandler’s role in the film ‘Water Boy’, is physical performance manager for Wales, and has been on the last three Lions Tours in 2009, 2013 and 2017.

“I was crap,” Bobby tells me when I ask him if he played rugby, “and I wasn’t big enough.”

While training as a wrestler, he studied BSc Sports Science at Edge Hill University before becoming a full-time athlete and representing England at the 2002 Commonwealth Games.

He didn’t stay in wrestling for long after his fitness coach at the time, Craig White, offered him the dream opportunity as an academy assistant coach at Wasps. This was the chance to work with Warren Gatland, and Bobby’s “hero” at the time, Shaun Edwards.

“On the first day, they told me I was living with Shaun. He was my hero, and I was sleeping on a bunk bed in his spare room,” he laughs. He has now worked with Gatland and Edwards on-and-off for 18 years, and the trio are close friends away from rugby.

He now lives in Toulon, with his partner and their two children, aged 11 and 7. The family decided to stay in France following Bobby’s three-year spell at the club and, since 2017, the 39-year-old splits his time between France and Wales, sometimes spending months at a time away from his family.

Before heading back to France after a camp, he stocks up on the British essentials: sausages, bacon, Colman’s mustard, and Pot Noodles.

The first time I met Bobby was in a Tesco near the Wales training camp, the day after the team landed home from the World Cup. His arms were bundled with pork products. Now, I understand why.

“The family were jumping around. I sent the video to Warren and a few people and they said it looked like the kids had won £20,000. It’s amazing what you miss when you are away.”

Beyond strength and conditioning

I imagine Bobby could be impossible to manage – but he reassures me that he always warns those who need to know before an elaborate joke.

Take the last training session on Wales’ recent trip to Switzerland, for example. Bobby and his assistant Huw Bennet told players they had missed the cable car, only to make their entrance by paragliding the 15-minute descent down to start training. Bobby warned Warren and the team manager of his plans because he had to, but also so someone could play the James Bond theme through the speakers upon their arrival.

Like Gatland, Pivac recognises the importance of fun in a camp, continuing the ‘Bobby Cup’ tradition, an award for the most hard-working player after Wales have won two consecutive games.

Bobby’s charisma should not be seen as a replacement for serious talent – this is a man at the top of his game. He recognises the need to develop physical performance to match modern-day rugby.

“The rules of the game put less emphasis on the scrum, so it’s becoming more of a running game,” Bobby says.

“There’s a lot more high-speed running, running over 40 per cent of your maximal pace, and metres-per-minute have increased too. Collisions are harder, the ball is in play a lot more. The game requires you to be fitter now than it did five years ago.”

Bobby talks about the particular challenge of South Africa, where the Lions will Tour next summer: “If you’re trying to defend against a South African team – big, powerful guys running at you – you’re just defending a maul, hitting a ruck, getting hit, getting off the floor. It’s a different level of fitness.

“We have to manage that in camp. You do that by putting contact into training, and also doing power endurance sessions, where the boys are lifting heavy, or doing one-vs-one wrestling. You have to be fit in every facet of the game these days to compete.”

What makes a successful Lions tour?

“Winning,” Bobby laughs, but then explains the complicated data-driven process of selection with around 70 players on the radar before the final selection is made. “To be successful, we need to get as much background information as we can, so that when we get the players, we know how to manage them individually.

“It’s about getting as much information about the boys as we can. You build a profile on each player with the medics, then when it gets down to the squad, we will know a lot of information on these guys.

“We’ll know the answers to questions like: How does he sleep? Is he a snorer? Does he need a single room? Is he good away from his family? Does he struggle in hotels? Does he eat well? Does he put weight on in hotels?”

I’m curious to know how the coaching staff manage big personalities, especially those who don’t always play nice against their opposite numbers, but Bobby says that big personalities are great for the squad. “James Haskell on the last Tour was absolutely brilliant,” Bobby says. “He was brilliant for being around camp. Massive character, great for the group. Works hard too.”

Bobby tells me that the final Test of the 2013 Tour was a particular highlight. “That was massive,” he smiles.

“There was a lot of pressure in that week, because we were drawing the series after two games, and Australia had the momentum behind them. But when you win games like that, it’s just pure relief more than enjoyment. It’s often not that you have won, but that you haven’t lost.”

So what was the third Test in 2017 like, with a draw against New Zealand? “On reflection, I realise that we went to the home of the best team in the world, for the last ten years probably, and we got a draw. We could have won, but we also could have lost it, if Sam Warburton hadn’t been the great captain that he is.”

Aside from performance, Bobby’s favourite memory of the Lions is the famous prank call from Simon Zebo to Munster manager Rob Penney, asking for the captaincy. Bobby is in a fit of giggles just talking about it.

“There’s a lot of research that shows that happier players give you a better performance, so that is really important to us,” Bobby says. “On Lions Tours, you have four nations coming together, so we have to accelerate the process of getting them to know each other well. Getting together and having a laugh is massive and we always put social activities in. We need to get the Lions team feeling like a Lions team, and not just four nations, as quickly as possible.”

The Bobby Cup is a big part of getting players together and having a laugh. Originally a plastic cup Bobby found in the Wasps’ changing room in 2002, he takes the prestigious award to all teams he coaches, including Wales and each of his Lions tours. “On Lions, we do it when we win two games in a row. It’s gone from low budget to quite high budget now,” Bobby laughs, “The Lions give me one of the guys who films for the DVD and he’ll spend like five hours doing it with me.”

Not many players have retired since the 2017 Tour, but of those who have, who would he miss the most? “Rory Best,” Bobby tells me.

“He was brilliant. He never actually got to play a Test, but he was always there, working hard, never complained, got on with it. He was great for the boys. He epitomised what it means to be a Lion, working hard, working for the team, and helping to prepare the Test team when you’re disappointed yourself.”

I expected his answer to be Sam Warburton, who Bobby praises for his wonderful captaincy in the 2017 tour. I ask if the ex-Lions captain could be included in the 2021 coaching staff. Bobby is not saying anything. “Warren keeps that tight-lipped”, he says, “last time, we didn’t find out who the other coaches were until we arrived at the meeting.”

Warburton caught the attention of many for becoming Wales’ water boy in this year’s Six Nations, and I suggest that he may start being called ‘Bobby’. But the real Bobby knows I’m joking – there could only ever be one of him.

Bobby is known for his power to motivate just about anyone – it’s not easy making props do push-ups. Here are his top tips on staying motivated at home:

1. Use this time to make a lifestyle change. If you haven’t got work and are spending more time at home, it’s a great time to make some positive changes, like do some training or improve your diet.

2. Stay in touch with family and friends. Get some WhatsApp chats going with friends and family. Think of people outside of your close circle who might be on their own, such as older people or people you work with who don’t have family and reach out to them once a week with a text or phone call. “There is an elderly man who lives opposite us, and when my partner asked him if he needed anything from the shops, we found out he hadn’t seen anyone apart from his carer in six months. So now we take him biscuits and chat to him for 15-minutes every day, observing social distancing obviously, and he said it has made his year.

3. Learn something new. Maybe try and learn a language, an instrument, or how to cook. I’ve heard of some players who could only cook beans on toast before, who have been learning how to cook over Zoom calls. Even DIY around the house, there’s a lot you can get done in this time at home.

4. Remember what’s important. This isn’t forever. We will come out of this together, society will be stronger and we will all realise that material things don’t really matter. Being together and being able to spend time together is what’s important and I think people are starting to realise that. Remember there is light at the end of the tunnel as long as we respect social distancing and keep everyone safe and healthy. My sister Laura is a nurse and my mum, Angela, works with social workers. I have so much respect for key workers, and how brave they are.

Jessica Hayden is a freelance rugby journalist based in London, with bylines in publications such as The Times and The Guardian. Jessica, who has a Master’s degree studying the representation of women’s rugby in Britain, also regularly speaks on BBC Radio as a rugby specialist and an NFL correspondent. Follow Jess on Twitter: @_JessHayden.