The story of a little piece of Brian O’Driscoll magic

It starts like many a training ground move. [more] 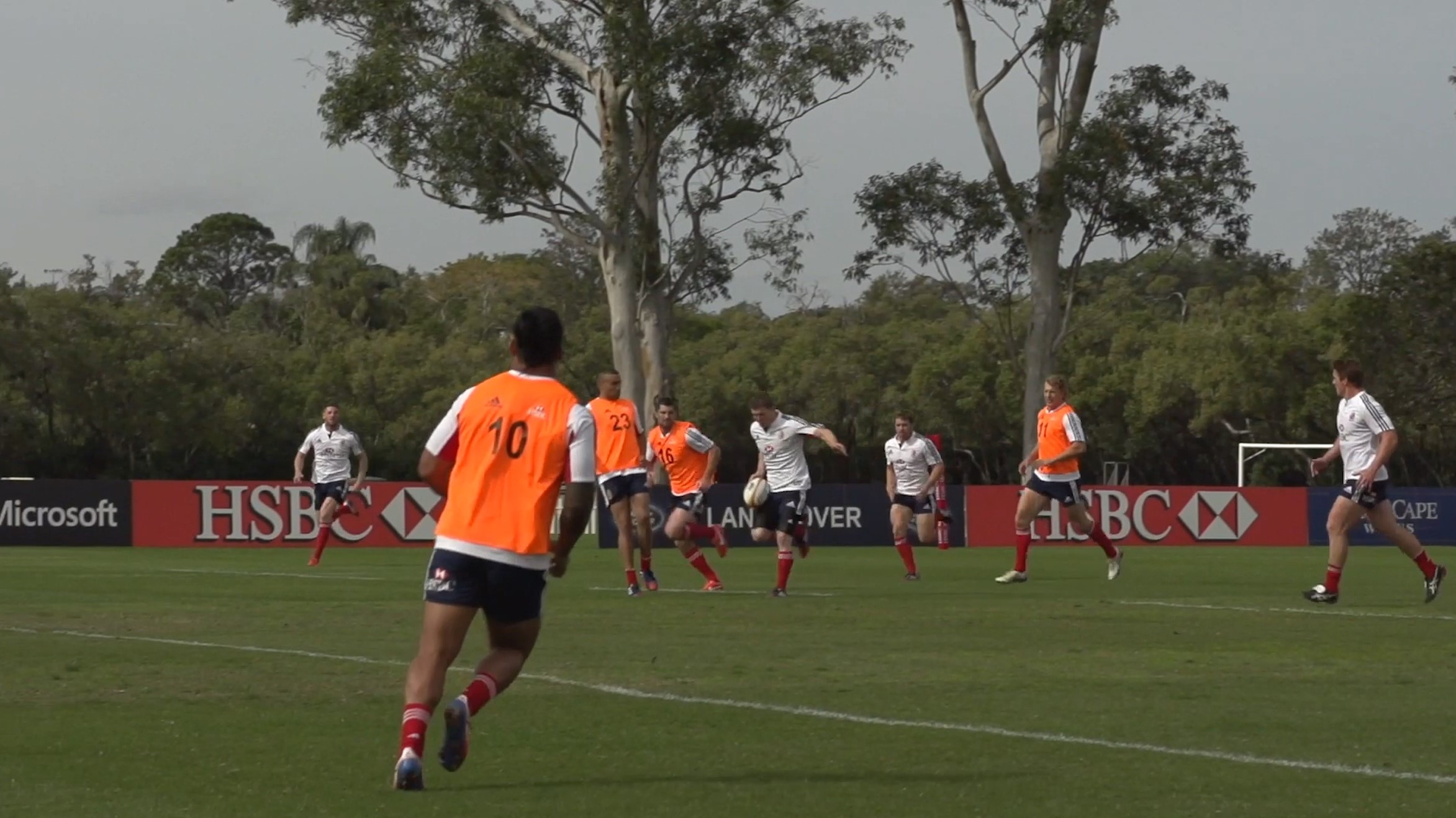 Two teams are lined up to work on a particular scenario. Fly-half Johnny Sexton receives the ball from Ben Youngs. He chips the ball deftly into space behind the defence as Brian O’Driscoll, George North, Leigh Halfpenny and Alex Cuthbert sprint forwards through the defenders. O’Driscoll glides through the defence, eyeing the ball like an eagle stalks its prey.

The ball descends back down to earth. You can catch a rugby ball but Brian, casually as you like, uses football skills Ronaldo would be proud of to flick it up to himself with his foot.

To top it all off, he passes it ‘no look’ style behind his back to Leigh Halfpenny. It’s over in a matter of seconds, but as he looks up, everyone is smiling. They know they’ve just witnessed something special.

On the face of it, this was just one more small yet staggeringly cool move. But something a little deeper resides in those fleeting seconds. Something which is, in my opinion, is the heartbeat of any successful rugby side. Arguably, any team in any environment.

You can’t see me in the frame, but I was grinning too, behind the black eyepiece of my camera. I knew I had captured it perfectly on film, in slow motion on a specific type of camera and lens, which meant it would look spectacular. Capturing special moments like this is the reason I make films. It’s all about getting incredible stories that fire the imagination. This moment would undoubtedly help me to do that.

Someone else you can see in the clip but won’t you have noticed is also smiling. Just behind the billboards on the side of the pitch is Stuart Lancaster, the England head coach at that time. Warren Gatland had graciously welcomed him into the camp to view the afternoon backs session.

Along with Stuart, I’ve also spoken with Leigh Halfpenny and Jonny Sexton to get their memories the moment. I wanted to see if we can learn anything from it other than merely dropping our jaws in sheer wonder.

I had left a vague message with Stuart about how I wanted to talk about a piece of skill from Brian O’Driscoll in 2013. When we spoke, he said that “even though it was seven years ago, I knew exactly what you were talking about. It was the Thursday before the Brisbane test, and I had come in from England’s tour of Argentina. It was a great reflection of the environment that Warren Gatland and the squad had established. I remember being impressed with the sheer confidence and composure of Brian just ahead of the first Test.”

The quietly spoken man-of-the-series in the 2013 tour, Halfpenny, was equally impressed. “It was a set play, and Johnny put a lovely little chip over the front line. A perfect distance for running onto and the skill was unbelievable really. The touch up from his [Brian’s] left foot was incredible, straight into his hands.”

So how important is that kind of creativity in pressure situations? Leigh believes that “it’s important to play what you feel and see and have a licence to try things; to play with your instincts. We had that in 2013, and it was special to be involved in a squad like that.”

Sexton, who is as fierce a competitor as they come, was also in fine form on that tour and made that chip through look easy (it’s not!). I asked him about that moment, and he reflected on it with the same shrewd intelligence with which he dictates the play with whether for Leinster, Ireland or the Lions.

“We talked a lot in that series about that sort of chip space and the way Australia defended. This particular one was off first-phase. My chip is one thing but obviously how Brian gathered the ball is pretty special. A little showboating at the end with the no-look pass, but he was always trying things like that in training, and often it came off. He wasn’t afraid to do try it on the big occasion, in the big games too. That creativity in rugby hasn’t been knocked out of the game, but it’s only seen in really special players, and he had it in spades.”

So perhaps this kind of “special” moment is down to an individual. But while it does take an individual, I think there is also more to it. Brian was not born with special powers entirely unique to him, even if at times it may have appeared that way. He’s been the hardest working guy in the room for decades, and that is why he was one of the greatest players. Teams, and the individuals that make them up, are also the result of their environment and the characters within them. Will they pull each other forwards or drag each other down as they scramble to further themselves as individuals?

You need what Keith Wood once described to me as ‘the right blend’. If you have that, the magic will come. It’s a virtuous circle. You see something inspiring like that moment from Brian, and the confidence can filter through the entire squad.

So perhaps this moment is as much about the environment itself as it is about one outstanding player.

“You see it now with other players these days, with that little bit of magic in them”, remarks Sexton.

Stuart tells me “it’s the environments that create the moments. You have to allow the players to express themselves without fear.”

I have to agree. For over twenty years, I’ve worked with elite athletes and elite filmmakers, and one thing remains constant among them; an ability to create an environment where fear doesn’t come into it. There are only passion and a desire to do something and to be a part of something special.

“Often, these moments in training sessions don’t get captured and become just a part of someone’s memory, that just gets forgotten, so it’s great you captured it so well.”

That’s why what we film behind the scenes in these moments is so important.

The Lions – “the best stories”

How many people remember Jeremy Guscott’s try against the Wallabies in Australia in 1989 which kept the series alive at the battle of Ballymore? Compared to his drop goal against South Africa in 1997, it’s a minute fraction. How can Finlay Calder, the captain of that tour, rate Mike Teague’s performances in 1989 as one of the greatest ever by a British & Irish Lion, yet so few people know about it? It earned Teague the ‘Man-of-the-Series’ accolade yet there is little to remember it by if you weren’t there. It’s about creating stories and telling them well. I asked Finlay, who is my personal Lions hero, about this subject and where he felt the lessons lie.

“People step up or step out under pressure. It comes from a combination of individuals and not a specific individual. It can turn momentum and win matches.”

That’s what this moment is to me. It’s an environment or culture that’s created. A culmination of experience that provides the platform for wizards to create and inspire. This environment was created by Gatland, by the leaders like Paul O’Connell, Sam Warburton and Brian himself and by the environments who have shaped them as they progressed through the game. It’s then down to the skill and attitude of the individuals. The perfectly weighted kick from Johnny that tees up the opportunity for Brian. It’s this combination, this ‘blend’ that has rightly earned O’Driscoll and the Lions a place in the heart of sports fans the world over.

It explains why the Lions are one of the greatest sports teams of any kind in the world. It has one of the best stories. A story that has been born from moments of magic like this and that fortunate people like me get to witness and share.

I don’t know about you, but I can’t wait for the next moments of wonder that await in South Africa 2021. 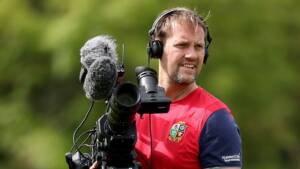 Ben Uttley is the owner of Stamp Productions. He is Director and Producer of Lions feature documentaries ‘Living with the Pride’ (South Africa 2009), ‘Lions Raw’ (Australia 2013) and ‘Lions Uncovered’ (New Zealand 2017). He has just completed a circumnavigation of the world for his latest film ‘The Silver Spitfire’. www.stamp-productions.com Follow Ben on Twitter @benuttley or Instagram @benjamin_uttley You can also follow Stamp on Instagram @stampproductions.