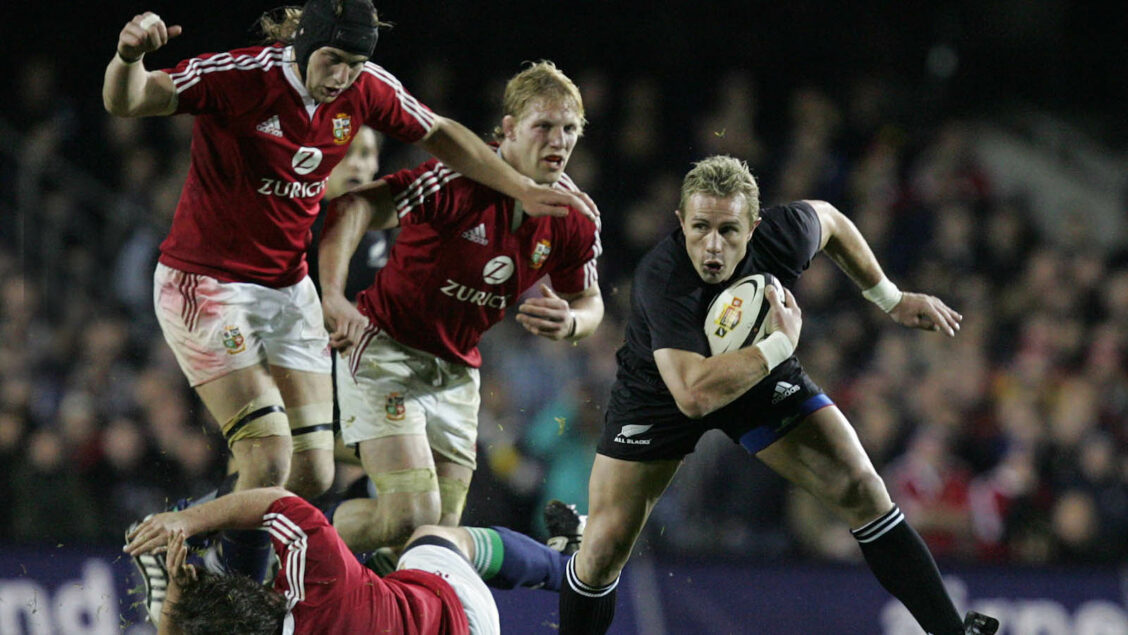 “I’ve never been so cold. I came off the pitch with about 10 minutes to go and normally they hand you an energy drink or a bottle of water.

“But it was so cold, they gave me a hot cup of soup instead!”

Justin Marshall sat in his Christchurch hotel just four hours before kick-off, praying for the weather to turn.

New Zealand had spent the entire week ahead of the first Test against The British & Irish Lions in 2005 preparing a game plan designed for the wet, windy and cold weather forecast to barrel in from the Pacific Ocean, only to find pleasant sunshine and a gentle breeze.

The All Blacks, two years on from a heart-breaking World Cup semi-final defeat to rivals Australia, could ill-afford another slip-up on the big occasion.

The inquest after that 2003 defeat rumbled for months and a new head coach, Graham Henry, was installed and a new captain, Tana Umaga, put alongside him, a decision which paid dividends as the All Blacks returned to the summit of the world rankings by mid-2004.

But to truly be the best, you have to prove it and the Lions – containing England’s 2003 World Cup winners and Wales’ Six Nations Grand Slam champions – were the ultimate test for an All Blacks side in their prime.

Led by Sir Clive Woodward, who knew what it took to win in New Zealand after leading England to a Test victory in 2003, the Lions toured with confidence.

However, New Zealand knew how Woodward would set his side up. They also thought they knew how to combat it, as long as the weather played ball.

Marshall, the then 32-year-old scrum-half tasked with orchestrating their game plan, said: “That was a bizarre set of circumstances leading into that Test match because we were told, and were aware, of what we call a winter southerly on its way: snow, sleet, rain, hail, lots of wind.

“And I remember sitting at our hotel in Christchurch and it would have been 16 or 17 degrees and there wasn’t a cloud in the sky. It was totally blue. Sitting there having that coffee, I was worried because we had designed such a basic game. 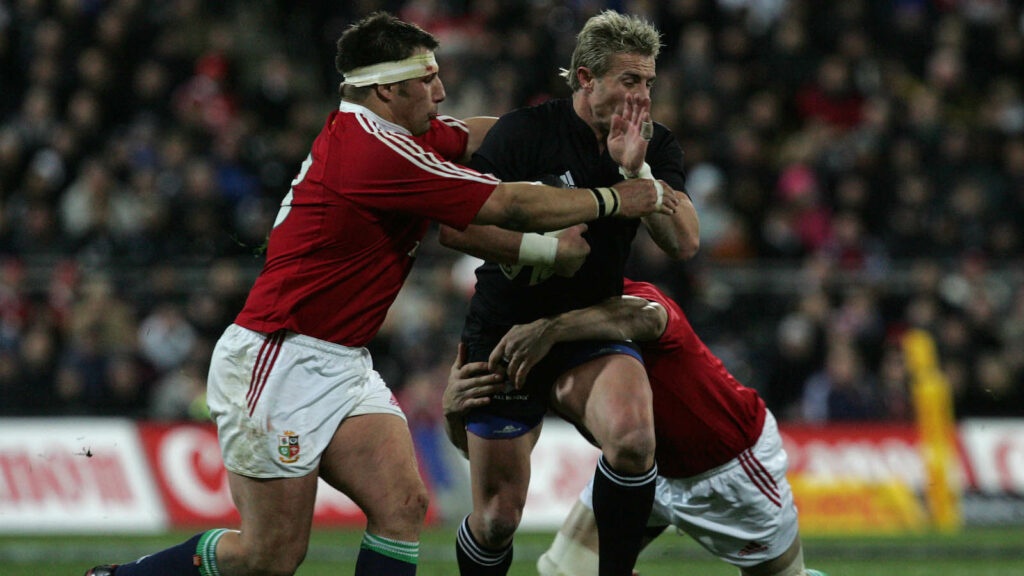 “We had an idea that, even though Clive had picked a Lions side, his mentality would be to play the style of rugby that we had struggled so much with against England.

“That was very territory-oriented and suffocating rugby and we gambled on that being the style. Why wouldn’t he, when he had coached the World Cup winners and had success against us?

“I just remember us going into that season concentrating on the set-piece: lineouts, scrums, kick-offs, diffusing high balls and physicality at the breakdown. I got sick of scrum training, I can tell you that!”

Fortunately for the All Blacks, the winds changed, the weather rolled in and the temperature plummeted.

“The weather really did come in and it got to a point where it was hail and nearly sleet coming in. I’ve played all over the world, but that stands out.”

Everything came together for Henry’s team. The Lions played as predicted and all of those scrum training sessions and ruck practices paid off for the hosts.

Dan Carter kicked two early penalties, lock Ali Williams muscled his way over for a try after a wayward Lions lineout and Sitiveni Sivivatu scored a stunning try in the second half after a delightful pass from Umaga. In response, the Lions could only muster a Jonny Wilkinson penalty.

As the game progressed, the weather worsened and Umaga was replaced in the second half after complaining his hands had frozen.

With ten minutes to go, it was Marshall’s turn to take his bow and exit stage left. And it was when he walked down the touchline, hot soup in hand, that he encountered something he will never forget.

“My teeth were chattering and I was shivering when I came off, it was that cold,” he said.

“But I remember, I looked over to a part of the ground where a huge bunch of Lions supporters were. I remember seeing them jumping around and singing, even though the game was gone.

“I was smiling to myself because I reckon there must have been 25 or 30 of them with their jerseys off and bare chested! 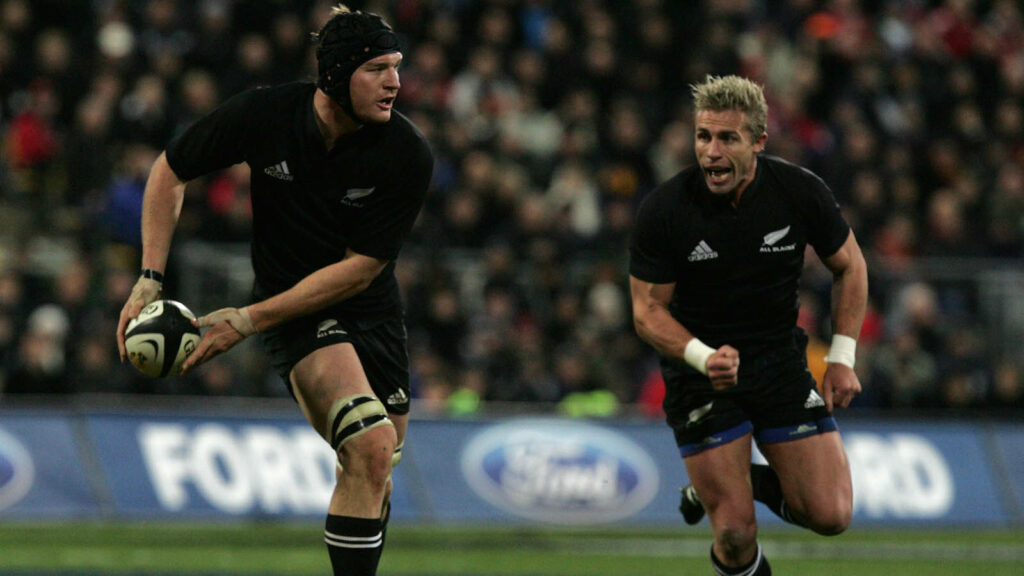 “That was something that really highlighted the evening. There was a sense of relief at getting the job done and then looking at those guys, shirts off, kilts on and kilts being lifted.

“I saw their passion. The game was lost but they wanted to keep on cheering and motivating the Lions. They were still super passionate about it. That is very vivid to me, it made me smile and I thought it was very cool.”

The weather improved for the second Test and so did the All Blacks, racing to a Carter-inspired 48-18 win before completing a 3-0 series success the following week.

It was Marshall’s final act as an All Black. He retired from international rugby after the third Test and headed for the Northern Hemisphere, where he spent five more years at Leeds Tykes, Ospreys, Montpellier and Saracens.

But it’s 2005 that he’s most proud of. The year of an All Blacks whitewash, a cup of hot soup and some topless Lions fans in the rain.