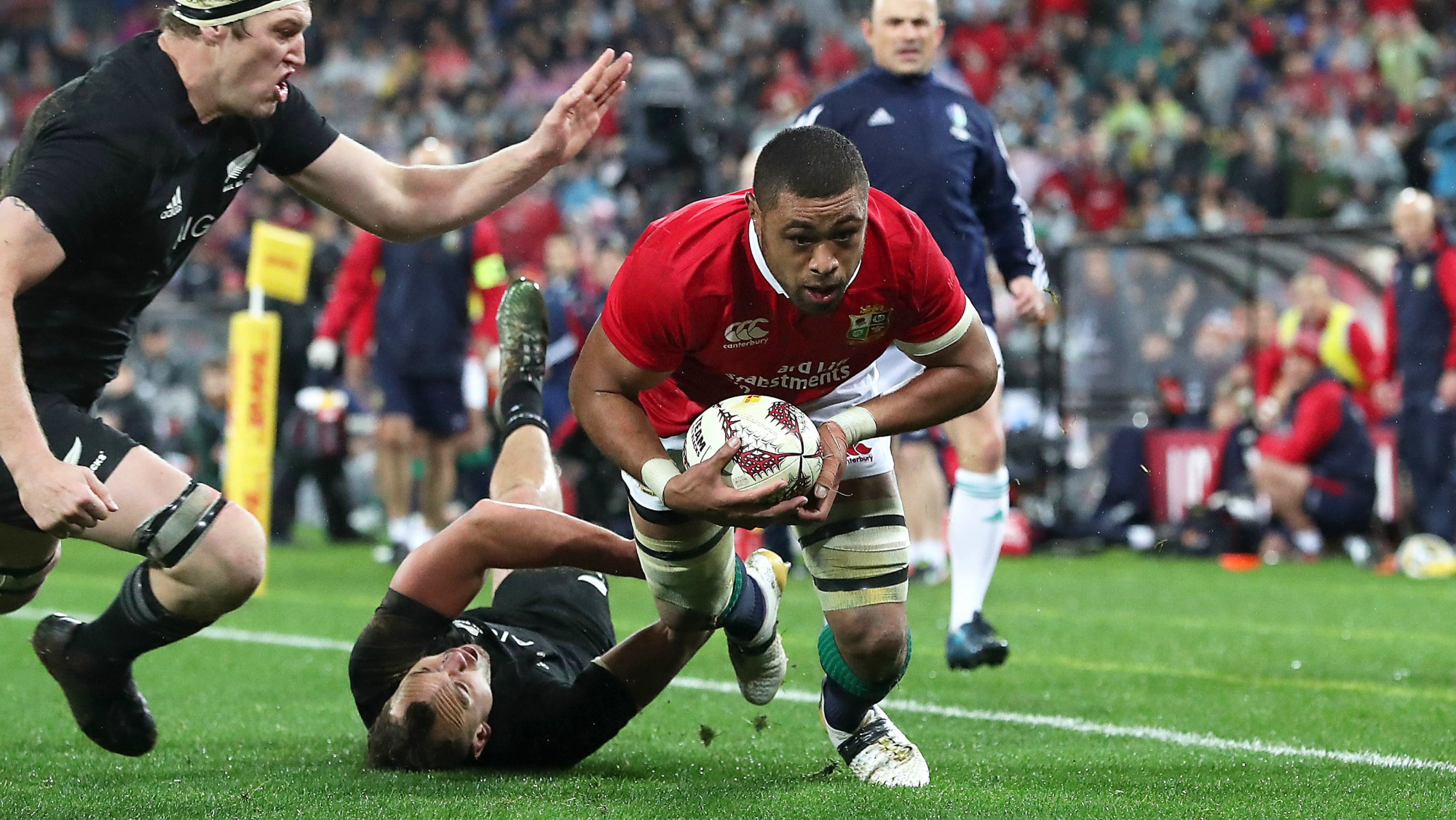 If Taulupe Faletau hadn’t gathered all of his considerable might to power past Israel Dagg three years ago, would we be talking about a drawn series today?

With history in the rear-view mirror we know the British & Irish Lions forced a fateful decider, edging the second Test 24-21, but it’s easy to forget just how close to series defeat the tourists came.

The Lions had not beaten the All Blacks for 24 years, no team had won in New Zealand for eight years.

With Mako Vunipola in the sin-bin, Wellington’s Westpac crowd piling on the pressure and trailing 18-9 the Lions were 20 minutes from series defeat – but history teaches us, the Lions always dig deep.

“We are playing the best in the world in their own backyard and they are 1-0 up,” Lions defence coach Andy Farrell said before kick-off. “We need to win – it doesn’t get any bigger than that. We will see what we are made of.”

🗓️#OTD in 2017 @J_George2 and @ConorMurray_9 made magic happen as this cheeky manoeuvre helped @lionsofficial secure an epic 21 – 24 victory over the @AllBlacks in their 2nd test! 👏

Faletau’s 60th-minute body blow was delivered late in the game, but it was a strike being wound up by Warren Gatland as soon as the first Test was done.

At the impenetrable Eden Park the All Blacks had been irresistible in their 30-15 win, attacking narrowly off a superb Aaron Smith at scrum-half – the Lions needed to find their width.

Out came inside centre Ben Te’o, Owen Farrell sliding into that shirt and Johnny Sexton coming in at No.10 – with everything on the line Gatland backed his double playmakers to find the far corners.

Just 25 minutes in and the plan received a timely boost, Sonny Bill seeing red to create much-needed space, but the All Blacks played the perfect game to keep the Lions out – no side able to break the tryline deadlock.

As the final quarter approached and with 14 men on each team Connor Murray launched the move that would turn the tables.

The No.9 sees the space out wide and opts to pass past flanker Sean O’Brien, out to Sexton as they go in search of those far corners. 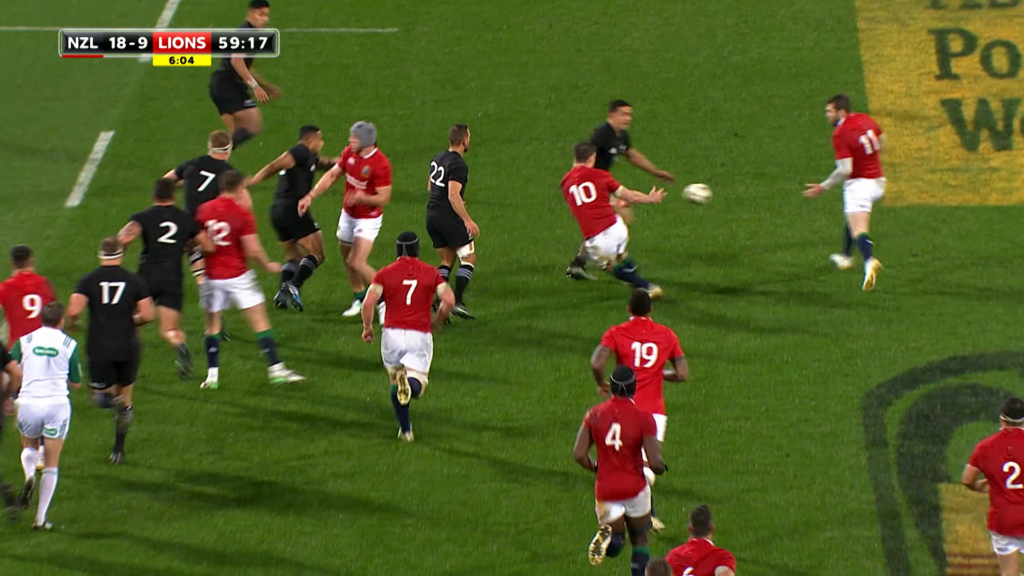 As it had been all game, the New Zealand rush defence is up quick, Aaron Cruden and Ngani Laumape up in the face, but a perfect wrap move using Jonathan Davies to fix allows Sexton to smuggle the ball to Elliot Daly. Anton Lienert-Brown is unfortunate here to be milliseconds too late to lasso Daly, he is a fingertip away from snuffing out this try. 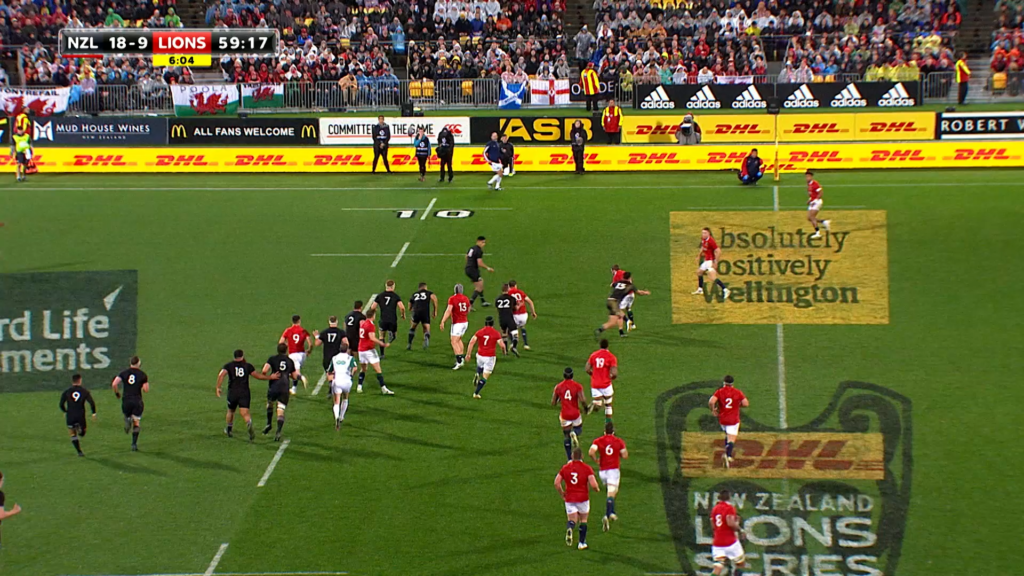 Daly and Liam Williams combine and momentarily Anthony Watson has space, the English wing hammering his foot to the floor before executing a fine piece of wing-play in electing to go to ground.

If Watson is too ambitious and keeps sprinting the likelihood is Beauden Barrett’s tackle will put him into touch. He could kick ahead but takes into account that Murray and Sexton are ahead of the ball, there would be no-one available to reclaim. 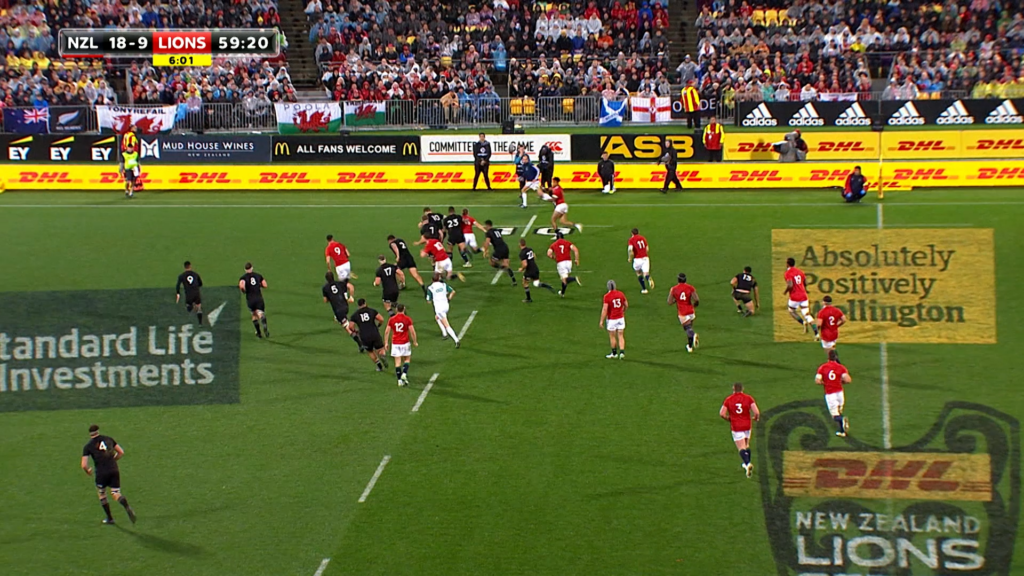 Just as he had been on hand to complete a wonder try in the first Test, world class openside O’Brien is there out wide once more – the Tullow Tank staunchly fighting off Barrett and Sam Cane to keep the move alive.

Having used the electric Watson to stretch the All Blacks on one flank the question is now whether the Lions can get to the other – thankfully in Murray, Sexton and Farrell they have three of the coolest heads in the business, Gatland’s selection looking for its dividends.

There is a blind move on, Watson is back to his feet on the right, Murray perhaps deciding that Rieko Ioane and Barrett are not exactly slow on their feet, that the better battle is elsewhere.

Sexton and Farrell are waiting. Once again, so is Lienert-Brown. But the Lions’ midfield three are right on cue and the decoy Davies holds his opposite man for just the fraction of a second required to allow Farrell’s miss-pass to Liam Williams. 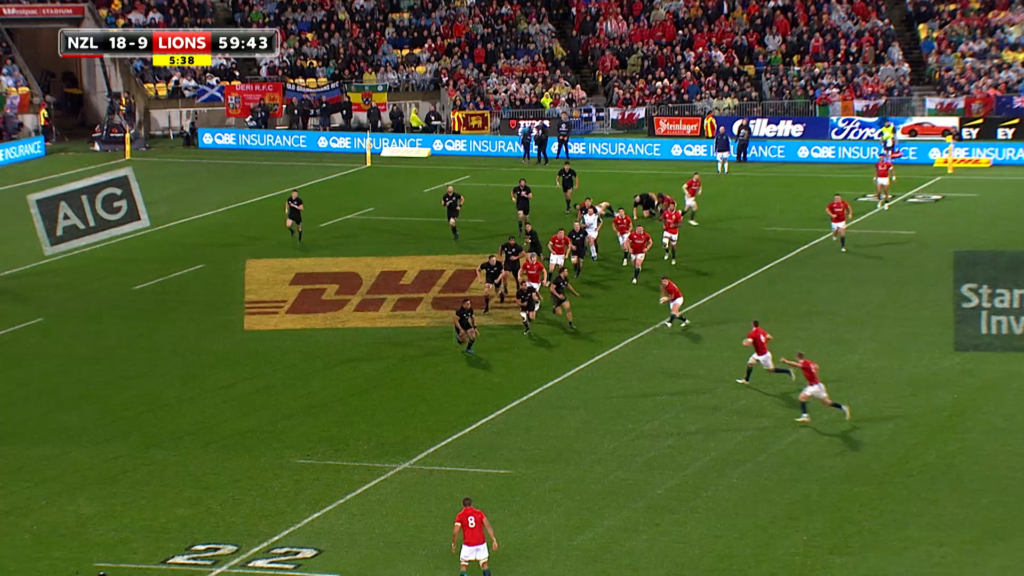 After an hour of knocking on the door the Lions have finally found the edge – they just need a man capable of delivering the final touch.

As he had done earlier in the move for Watson, Williams creates the space. It looks simple but the Welshman has a multitude of options to consider while on the fly.

He takes Farrell’s pass at pace, could he make it to the corner himself? He elects not to with Laumape’s hips turned towards him. Take the contact? The defence will reset. Prod through? It’s in the hands of gods.

At this point Faletau could well be thinking ‘just give me a one-on-one’ – Williams grants him that gift.

The full-back times his pass to perfection, condemning Laumape to the deck and out of the defence.

The Wales No.8 takes the pass 15 metres out, Dagg has him cornered, there is no cutting back inside. With Cruden, Brodie Retallick and Lienert-Brown all in support – New Zealand still have the door pressed shut. 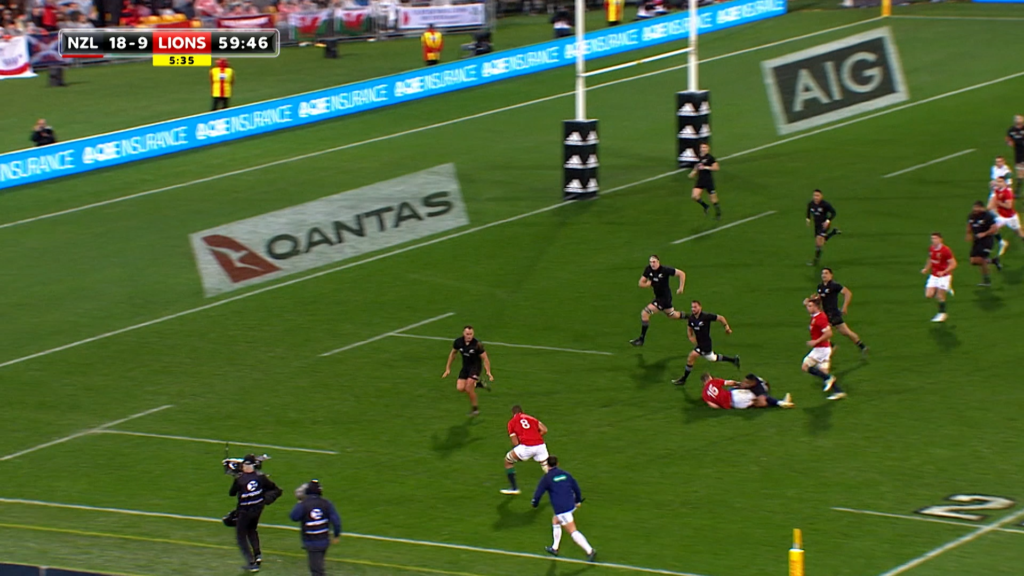 But Gatland’s reshuffled backs have done enough, they have found the corners, and Faletau is no ordinary man to have out wide.

There is a hop, both feet off the ground to slow the incoming Dagg. 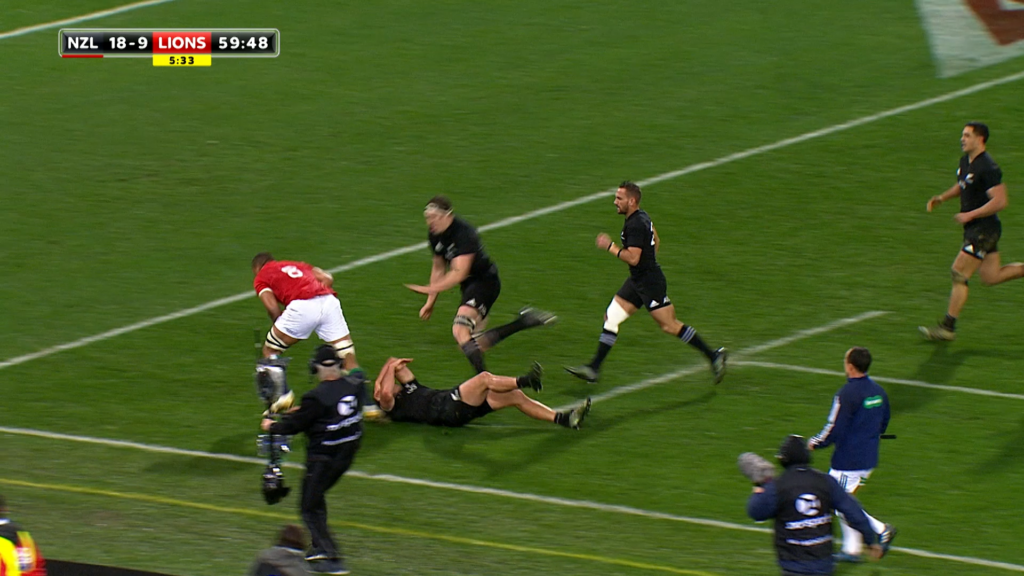 Faletau summons all his might, all the final-quarter spirit of Gavin Hastings and Guscott in ’89, and delivers the blow that finally smashes the door to the 2017 series off its hinges. 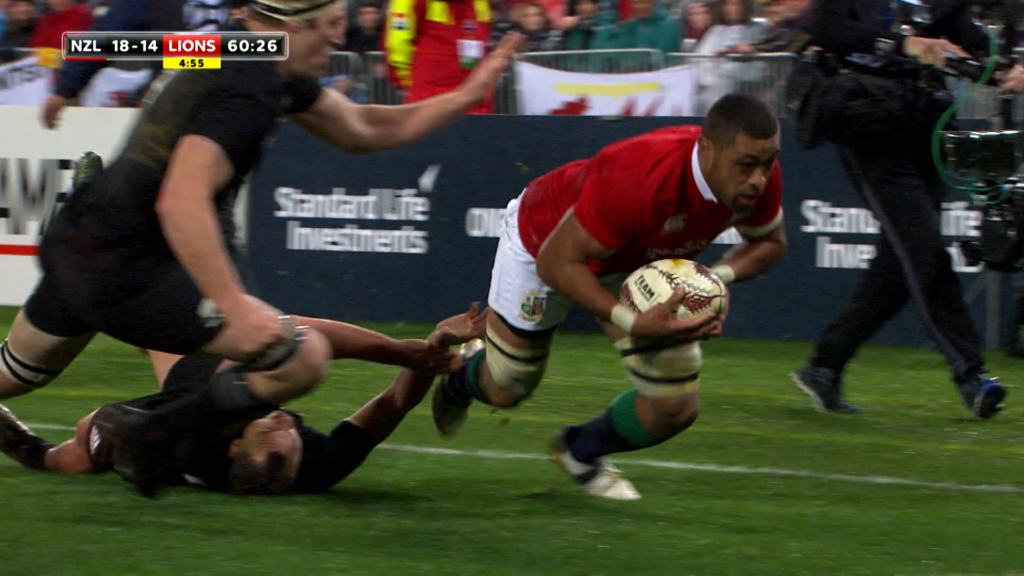