On This Day: Relive Lions and All Blacks playing out epic 2017 finale

Only once in the storied history of the British & Irish Lions had they gone to New Zealand and emerged with a Test series victory. [more] 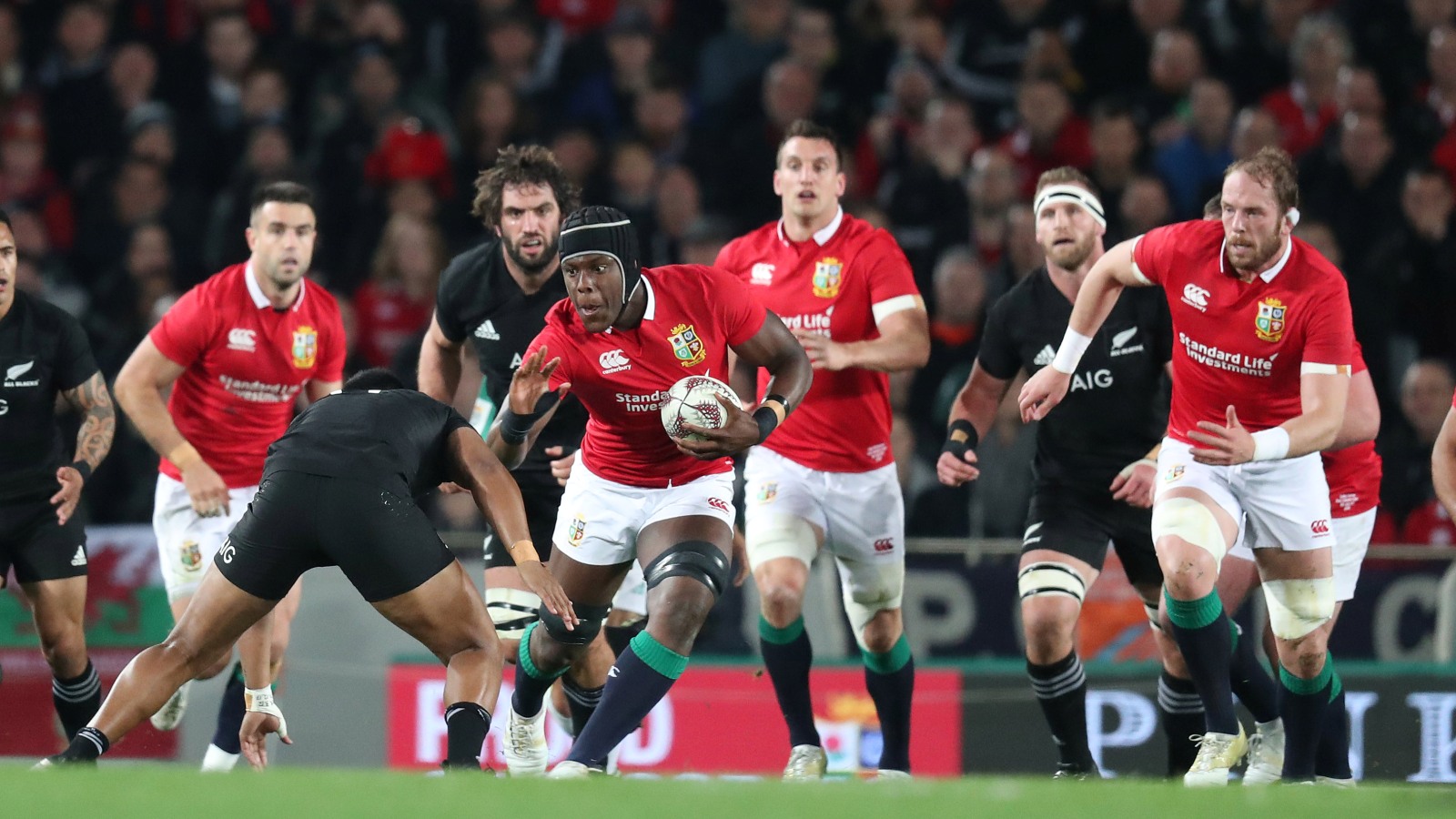 That after all these years, only those legends of 1971 – coached by Carwyn James and captained by John Dawes – had won a series against the All Blacks gives some indication of the magnitude of the task.

Yet on this day, July 8, three years ago, the Class of 2017 had the opportunity to join those heroes from ’71 as they headed into the final Test at Eden Park tantalisingly tied at 1-1.

The Rieko Ioane-inspired All Blacks had won the first Test 30-15 before the Lions roared in Wellington, coming from 18-9 behind to level at 21-21 and Owen Farrell holding his nerve three minutes from time to slot the winning penalty.

It set up a decider in Auckland and while the Lions had excelled all Tour long, playing compelling, effective rugby under the guidance of New Zealand native Warren Gatland as head coach, history was against them.

Aside from the ’71 team being the only Lions to clinch a Test series triumph in the Land of the Long White Cloud, the reigning world champion All Blacks were on a 38-match winning streak at Eden Park stretching all the way back to 1994.

But as skipper Sam Warburton revealed in his autobiography, Open Side, the sense of unity and history among the Lions had them full of belief.

“Eighty minutes of pain for glory that would last a lifetime. I pull the boys in. The red Lions jerseys seem to glow, lit by fires from within,” wrote Warburton.

“‘Let’s pass this jersey on to the next generation,’ I tell them. No one owns a Lions jersey. You just carry it for a few weeks, try to add to it and pass it on.

“It’s not the jersey you put on that matters; it’s the one you take off. Empty the tank, Gats said. We’ll take the shirt off for you at the end if need be.

“We go out into the corridor. All the midweek boys and the support staff are there, slapping our backs as we pass.” 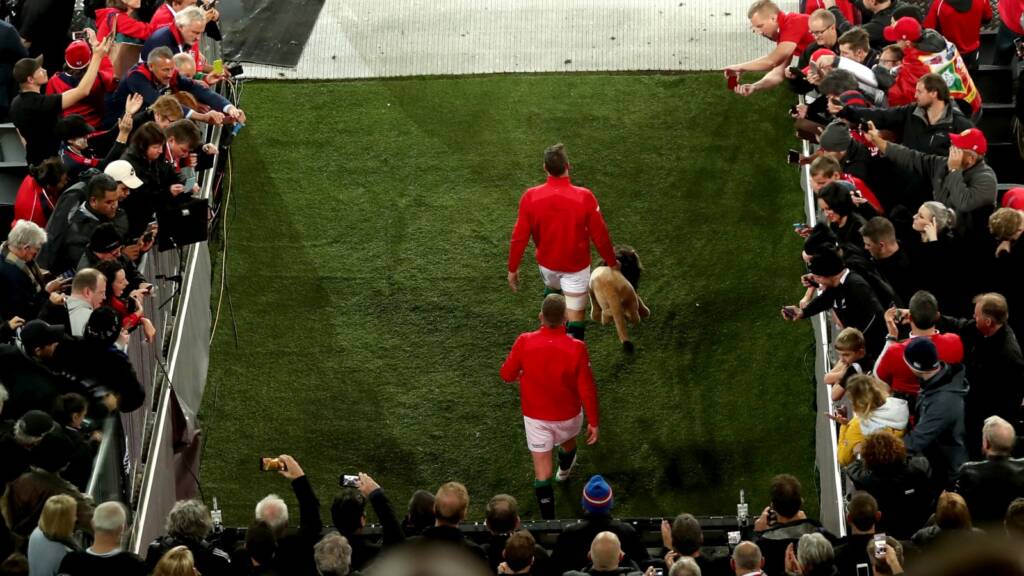 As the whole series had been, the first half at Eden Park was a physical encounter with neither team giving an inch.

The All Blacks were running hard lines off snapped passes from Aaron Smith but the visitors’ defence, with Jonathan Davies leading the way, stood up to the challenge and largely repelled the onslaught with brave tackling.

New Zealand did have a lead at half-time thanks to two tries involving a pair of young guns – 20-year-old Jordie Barrett and Ngani Laumape, winning just his second cap.

Firstly, Barrett tapped back his brother Beauden’s cross-kick to set up Laumape to dot down before the inside centre repaid the favour – brilliantly offloading to Anton Leinert-Brown, who freed Barrett for the score.

But the boot of Farrell kept the Lions firmly in touch as two penalties ensured the gap at the interval was only 12-6.

And just minutes after the break that became 12-9 thanks to a huge, long-range penalty from Elliot Daly, as Warburton remembers. 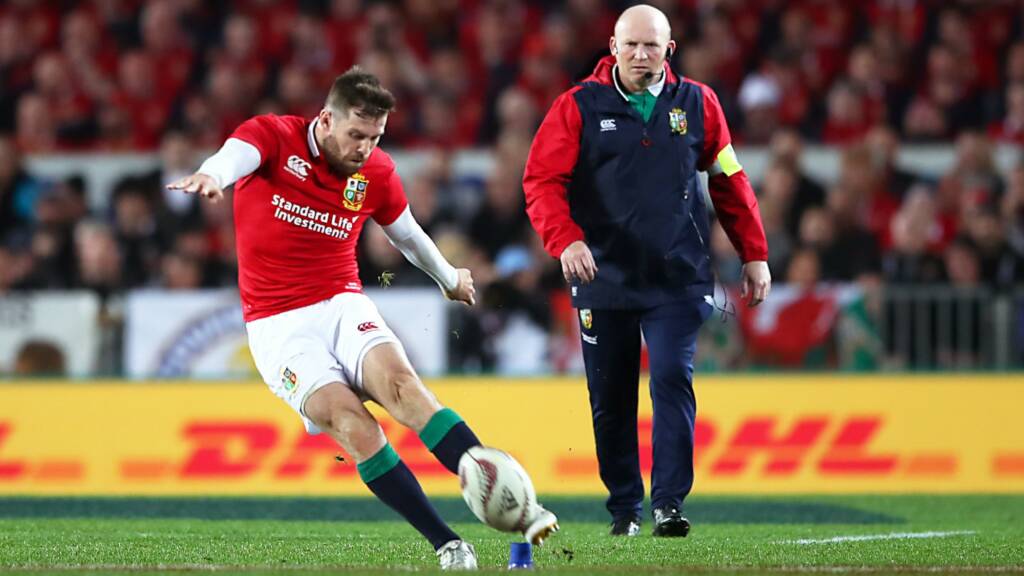 “Foxy (Jonathan Davies) takes it on and Kieran Read obstructs Liam (Williams). Our penalty, just inside our half,” said Warburton in Open Side.

“Kick to the 22 and work the lineout? ‘I’ll have a go,’ Elliot says. He’s got a monster kick on him, and in training he puts them over from this kind of distance for fun.

“But a 55-metre kick six points down in the biggest match of your life is a whole different ask to the practice pitch. He looks confident. And if a kicker’s confident, then trust him.

“Elliot doesn’t have an elaborate routine, take a particularly long run-up or seem to connect any harder than any other kicker, but bloody hell he gives this one a thump.

“It’s high enough and straight enough, and it gets over with a yard or two to spare. What a kick. What a start to the second half.”

Spurred on by Daly’s kick and a yellow card to Jerome Kaino, the Lions levelled the game at 12-12 on the hour mark when the ever-reliable Farrell slotted his third three-pointer of the match.

They had come close to so much more with the All Blacks down to 14 men but a knock-on and a lost lineout cost them those chances.

A Beauden Barrett penalty gave the hosts the lead back before, with three minutes to go, Farrell made it 15-15 to set up the most nerve-wracking – and exhilarating – of finales. 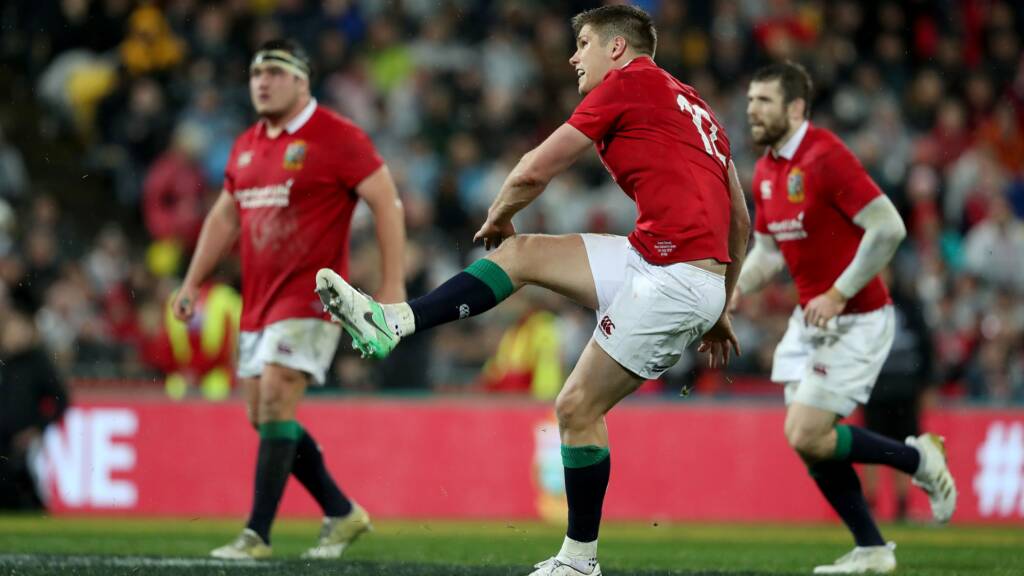 It seemed New Zealand were destined to win when, from the kick-off, referee Romain Poite initially awarded a penalty as Ken Owens instinctively caught the ball while in front of Liam Williams after it bounced off his fellow Welshman, before in the same movement opening his hands to drop it, knowing he’s offside.

But after consultation with his assistants and the TMO, Poite amended his decision to accidental offside – awarding the All Blacks a scrum rather than a penalty.

Some sterling late defence from Williams secured the draw for the Lions, as Poite’s whistle brought an end to a riveting Test match and an incredible series of rugby.

The Lions had secured their place in history – just the second team to leave New Zealand undefeated in the Test series and snapping the All Blacks’ 23-year winning streak at Eden Park.

Reflections on an iconic clash

We were left with the iconic image of Warburton and New Zealand skipper Kieran Read – on the occasion of his 100th cap – lifting the trophy together. 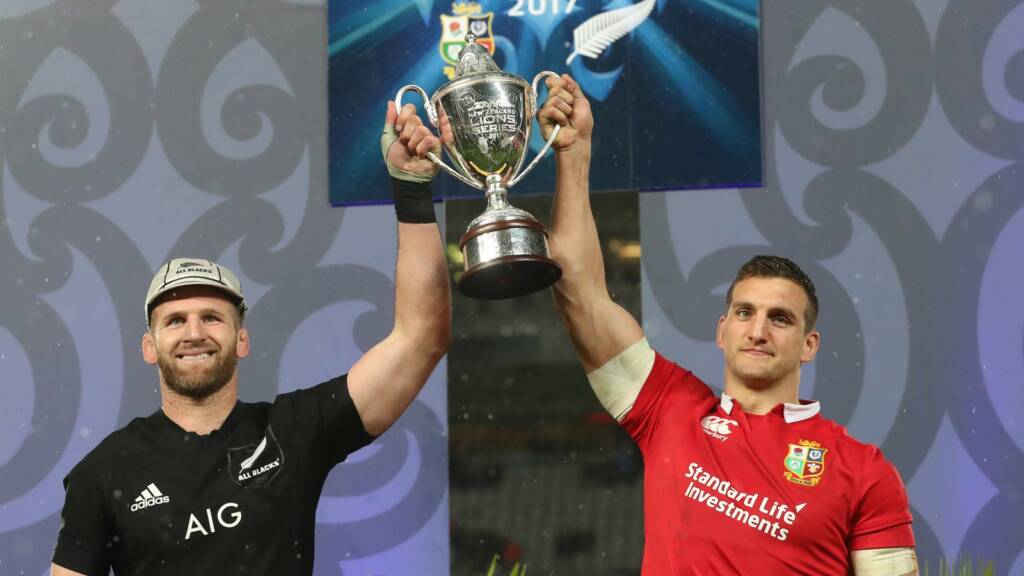 Perhaps unsurprisingly, given the competitive nature of elite sportsmen, a draw wasn’t as widely celebrated by either side as a win would have been and prompted a range of reactions from those involved.

Jonathan Davies said: “It was one hell of Test match. Credit it to New Zealand, they built and lead but we came back. It might have been a fair result, I don’t know.”

Barrett: “It’s not the result either team wanted. It was a great spectacle, it would have been good to see a result. They played well and Owen [Farrell] kicked really well.”

Hansen: “It’s come down to the wire and we’ve ended up with one hand on the trophy each, which is a bit like kissing your sister! But it’s been a wonderful advertisement for rugby.”

The Lions coaching staff recognised what a feat their players had pulled off on Tour.

Backs coach Rob Howley: “What these guys have achieved over the last seven weeks, it’s a great moment for us and the boys will savour it.

“We were trying to play rugby, trying to get to the outside edge. We’ve got back into the game and showed spirit that’s the 2017 Lions for you.”

Gatland: “The message at half-time was ‘we’re still in this game’. Given how tough the Tour was, to come to New Zealand and get a draw you’ve got to be proud of that.

“I’m really proud of the boys, they represented their four home countries brilliantly as tourists.”

Heart-warming scenes after the match saw both sides do a lap of honour together round Eden Park and mingle as the photos were taken of the trophy being shared. 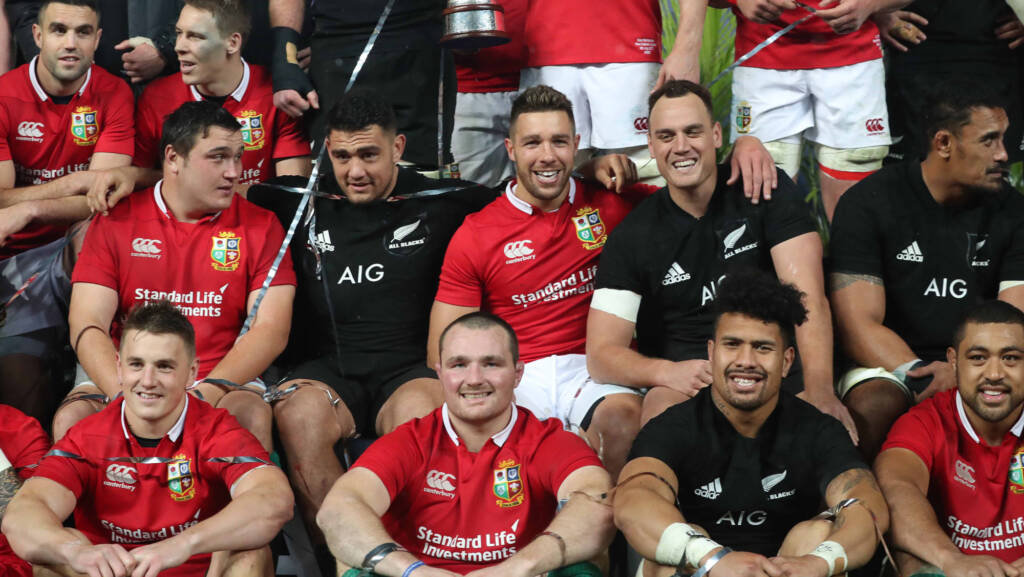 And as the Lions skipper remembers, it was the perfect end to an iconic series that reminded everyone what is great about rugby.

Warburton: “(Jerome) Kaino walks past us. ‘Shall we get the boys in?’ he asks. ‘All of us together?’

“It’s a great idea. We call everyone in and get them to mix, so we’re not just sitting in our own teams but in among the opposition and vice versa.

“There’s Rhys (Webb) with his arm around (Israel) Dagg, Kaino with his hands on Toby’s (Faletau) shoulders, Ken (Owens) with Ardie Savea, red and black mingling as one – a great image, an iconic image, of two teams that took each other from pillar to post and back again.

“Forty-six guys who gave everything, won nothing but came away with something special. They couldn’t separate us over three matches, and they can’t separate us now.”

Feature New Zealand News
Previous story My Lions Moment: Tommy Bowe
Next story The Big Interview: Rico Gear on that try against the Lions and rooming with Jonah Lomu