Lions Origin clubs continue to go above and beyond 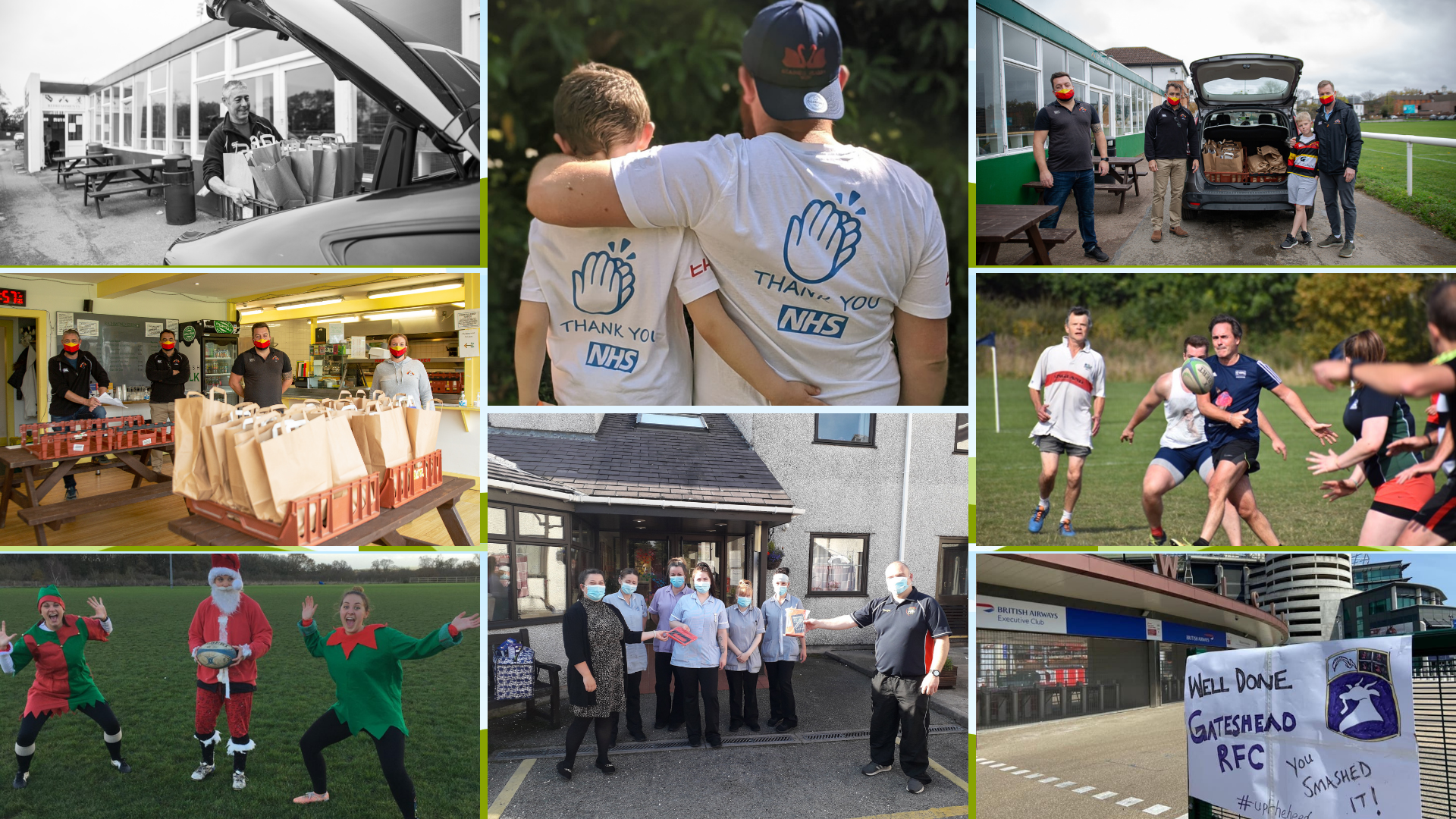 In a year like no other for the four home nations, there has been no let-up in the superb community efforts of Lions Origin clubs in the run-up to Christmas.

Rugby clubs across England, Wales, Scotland and Ireland have pulled out all the stops this year, with a range of community-based projects and activities in the absence of on-field action.

Santa calls in to Newbury

In Berkshire, Newbury Blues – where the careers of future Lions Tom Croft, Tyrone Howe and Jonathan Joseph began – entered into the festive spirit by hosting a ‘Santa Saturday’.

Around 200 players, from teams across age groups and genders, got stuck in to a touch rugby festival which followed an equally successful Halloween tournament.

In a year like no other for the home nations, there’s been no let-up in the superb community efforts of #LionsOrigin clubs in the run-up to Christmas.

“We have really developed a one club mentality out of all this,” said Newbury chairman David Jones. “Nobody is put on a pedestal. Everybody is treated the same and we really have evolved as a community rugby club.”

The club is currently raising money for two local homeless charities, Loose Ends and Newbury Soup Kitchen, to back up their efforts from the summer which saw the club organise and carry out a food delivery service across west Berkshire.

Newbury’s facilities are currently being used by the South Central Ambulance Service and West Berkshire Council, while the club has also remained an active hub for community groups.

“We have made ourselves available to the council to do what they want with the facility,” Jones said. “Blood donations have been done at the club and we are currently in discussions about doing vaccines from the rugby club.

“There are a lot of small local groups who have been using our facilities all the way through. Baby or toddler groups, choirs – groups that can socially distance have carried on using the club. No-one realised how much of a community hub we are until all of this.

“We are a rugby club serving the community and that’s what we need to be doing. Everyone needs to muck in and help, which is what rugby clubs are all about.”

Community has long been at the heart of Gateshead RFC, where the clubhouse regularly accommodates members seven days a week and big festivals are held that cater for people of all ages and backgrounds.

The Covid-19 pandemic forced the cancellation of the annual Gateshead Beer Festival and VE Day 75th anniversary celebrations, leading to a conversation between various coaches at the Durham/Northumberland Division 1 side about possible ways to retain fitness and engagement while raising money for a good cause.

Having initially set senior players a target of raising £500 for the Gateshead Foodbank by collectively walking, running or cycling the return distance from their base at Hedley Lawson Park in Low Fell to Twickenham – 554-miles – the home of Lion #567 Alan Tomes was quickly overwhelmed with the response from a range of people associated with the club. 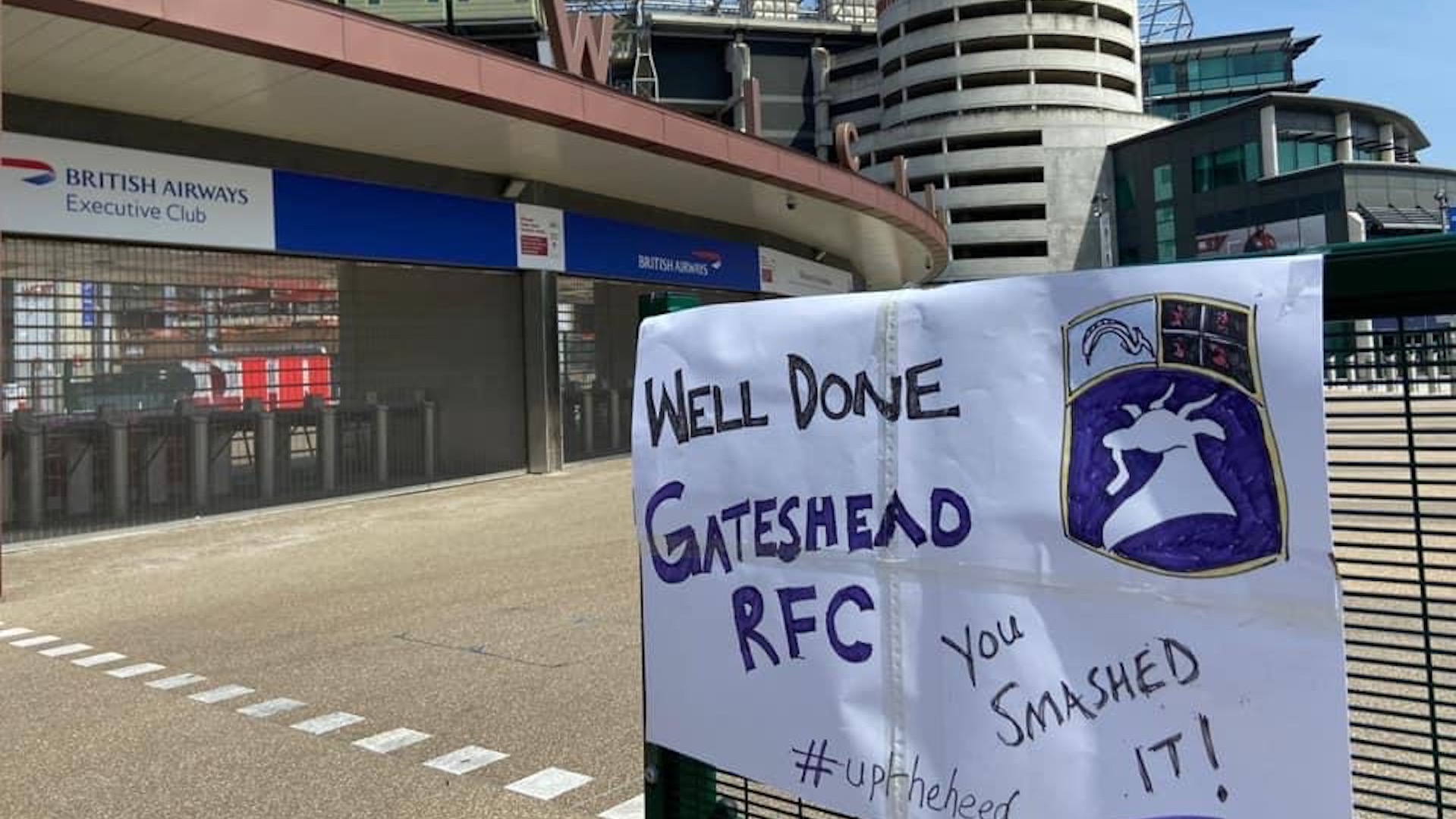 Approximately 200 people got involved across the May Bank Holiday, covering over 3,000 miles – the return distance of five of the Six Nations stadiums – raising around £5,000 for the Foodbank.

Club secretary Harry Grey said: “It was all born from an idea to keep the guys fit and interested. We had no idea it would snowball like it did.

“It made me feel incredibly proud to see the range of people getting stuck in and posting photos on social media, for example players, kids and parents. It became a huge community affair and that’s something that’s hugely important to us in Low Fell.

“We like to nominate a couple of charities to support when we hold our big events, and we’re delighted with the money we managed to raise for the Foodbank in such circumstances. We know it’s been a big help to them in such tough times.

“Besides the five stadium challenge we’ve made a big effort to keep members engaged on Facebook, and in the early days of the lockdown we offered help with shopping and provisions, to make sure people knew help was at hand if they needed it.”

Menai Bridge RFC are well versed in supporting local causes as part of their commitment to the local community, but the WRU League 3 North side were forced to think outside the box in the wake of coronavirus.

When rugby ground to a halt back in March, club chairman Darren Owen and a member of the playing staff discussed how they could raise money while simultaneously getting people active and maintaining the club’s profile.

Having seen initial plans to walk the Welsh three peaks shelved, the home of Lion #705 Robin McBryde settled on the idea of collectively walking, running and cycling 2,517 miles – the distance from Menai Bridge RFC to each of the Six Nations rugby grounds – in aid of St David’s Hospice.

Due to the efforts of more than 100 players and supporters this target was quickly extended to also include the distances to the venues for The British & Irish Lions’ three-test series in South Africa in 2021, and after six weeks between April and June over 16,000 miles were covered raising £1,250.

Owen said: “We always try to integrate into the local community as best we can. Prior to the lockdown we were in the process of setting up a hub for disability rugby, and we’ve long used the annual Menai Raft Race to raise money for good causes.

The Club was pleased to present an Amazon Fire tablet from @clwbrygbi to Glanrhos Nursing Home.

“We’d seen a lot of effort go towards supporting the NHS, and we decided we’d like to do something more locally-focused that everyone could get involved in. The hospice was hit hard by the pandemic and it’s a really important charity.

“The challenge snowballed beyond our wildest dreams. The youngest person involved was four and the oldest was 74, so it was a really good example of people from all walks of life coming together to do some good in tough times.

“We were also able to pass on an Amazon Fire tablet to Glan Rhos Nursing Home in Brynsiencyn that was donated by Clwb Rygbi Cymry Caerdydd, and some players and committee members volunteered at a local foodbank.

“Hopefully we’ll be able to get out to the Welsh three peaks in 2021 and raise more money for St David’s Hospice, to continue the good work.”

Richmond, in south-west London, is a club steeped in Lions history – no fewer than 33 tourists have represented the club.

The current crop have been busy organising crucial work in their community this year, providing food to local schools to ensure children had access to nutritional meals – a service they will continue to run over the upcoming Christmas holidays.

“Over the October half-term, from Monday to Friday, our catering team at the Richmond Athletic Association (RAA) cooked daily nutritional meals which were then delivered to local school children throughout our community,” explained Dom Palacio, Richmond Rugby Head of Community. 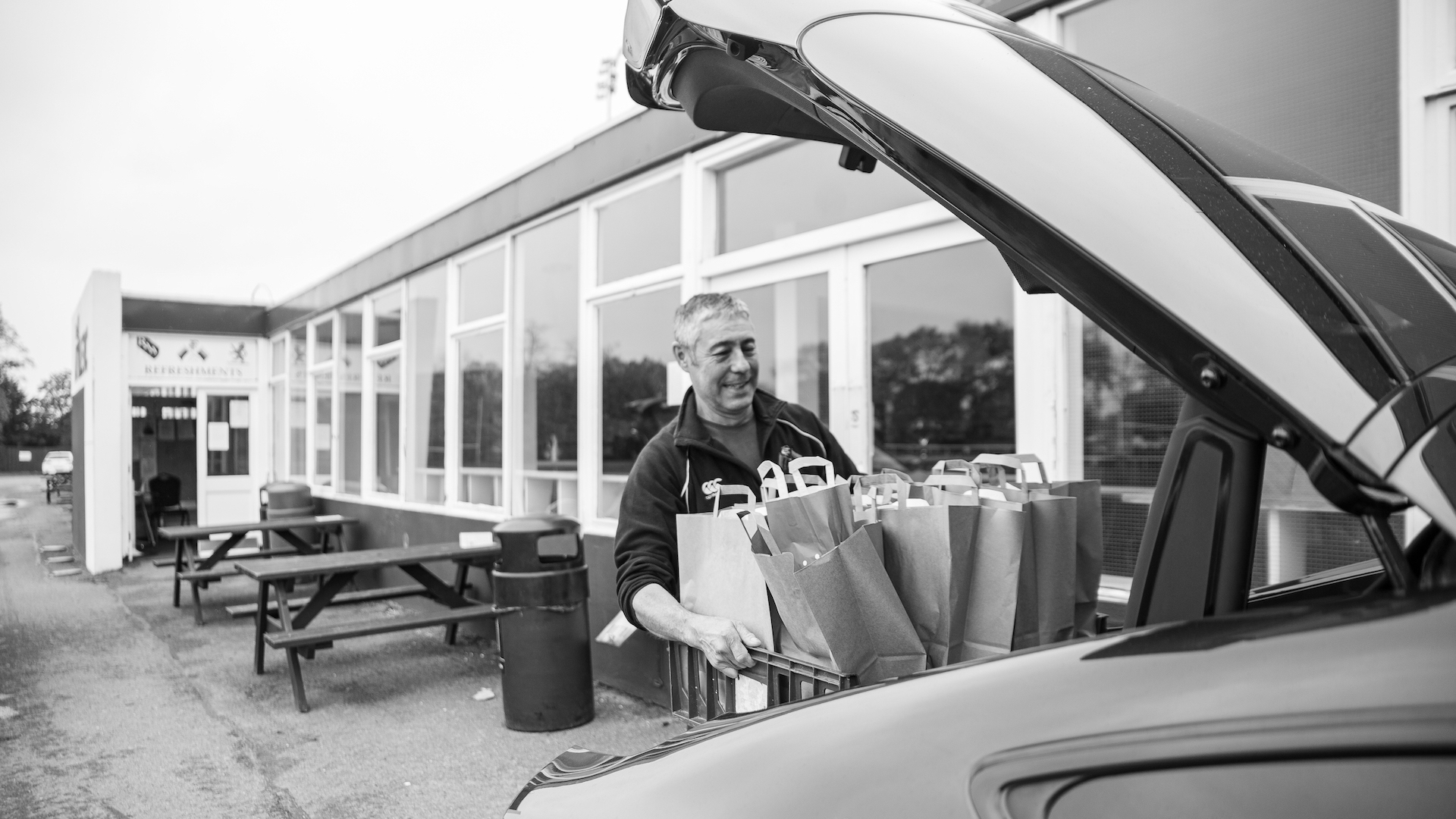 “The meals were collected each day from the Athletic Ground and delivered by our club volunteers.

“At the beginning of the week, we were delivering 45 meals per day to local children. That number had jumped to just under 100 by the Friday. We have also secured funding to run this food service again over the Christmas holidays.”

Stafford Rugby Club have also been busy helping the local community during lockdown, with a number of members getting involved with local charity House of Bread.

The charity aims to help the homeless and some of the most vulnerable people in society, and chairman Mark Carter has led the charge to support the organisation with delivering food to those who need it most this year.

The club have also used their brand new kitchen facilities at Blackberry Lane to help prepare the food, and Carter believes the bonds formed in 2020 will be something that will continue into the future.

“We had about 20 people that picked up and delivered food parcels to those that are living in sheltered or funded accommodation that weren’t able to get the food that they needed to get,” Carter said.

“At one point we were doing up to 30 deliveries a day all around Stafford and a bit further beyond. We also used our club kitchen to prepare food that can be sent out to the people that the House of Bread are supporting.

“It’s a very grounding experience, because you are dealing with people that are less fortunate than yourself and people that are in need of support, so that’s been quite humbling.

“There is a genuine desire to continue to support the House of Bread even when we’re not in the pandemic, as a charity that the club would support.” 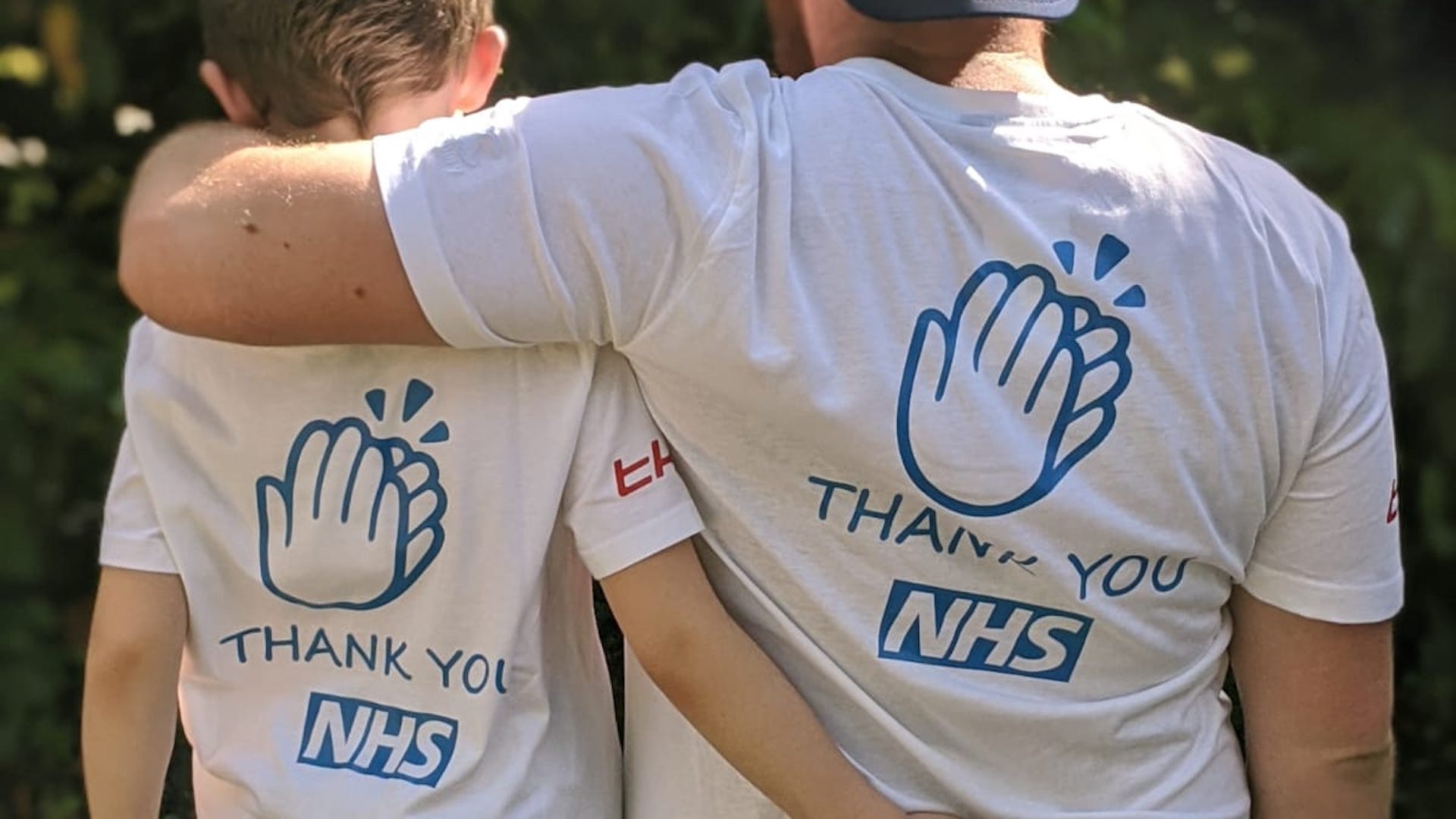 Just along the River Thames, Staines Rugby Club were part of the Tacklebag NHS t-shirt scheme launched during May-June this year.

Combined with five other Canterbury clubs, Staines helped raise £1,200 for the NHS in recognition of the incredible work of NHS staff throughout the toughest of years.

Visit our Lions Origin page in association with Canterbury, and search by club, player or location to find details of all 835 past British and Irish Lions.