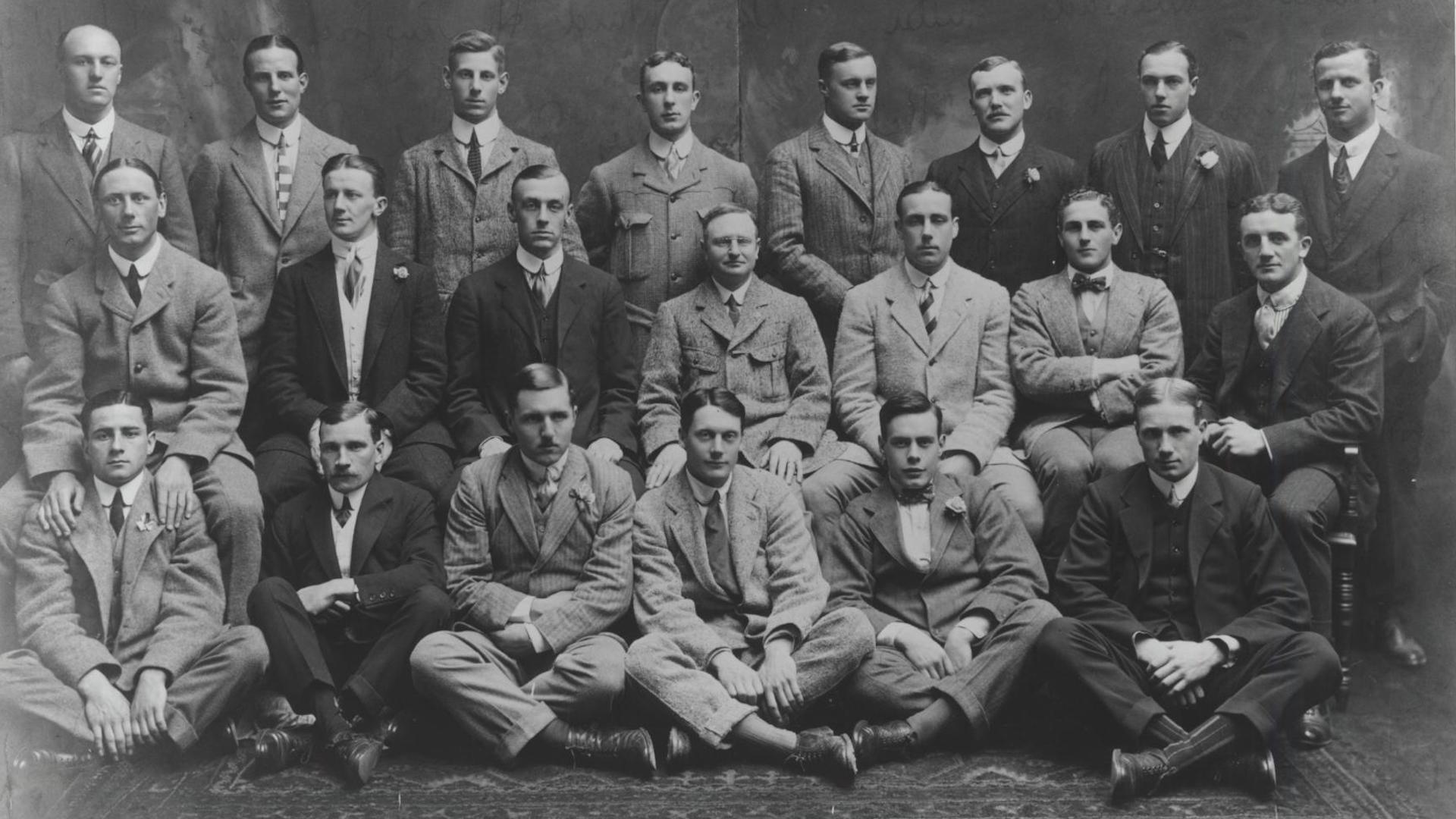 British & Irish Lion tourist Robert Harrison stood on a hillside 10 miles outside the Azerbaijani city of Baku in the middle of August 1918. To his left were some Russian soldiers occupying a neighbouring hill, to his right a battalion of irregular Armenian soldiers that he was commanding.

He knew that out there, in the four miles of undulating, dusty countryside that stretched out to the edge of the Caspsian Sea, were thousands of Turkish soldiers. And he knew that someday soon they would attack. He had come along way, this mild-mannered rugby player from Yorkshire.

Harrison – known usually as Robin, but also as Billy or Ginger – was a remarkable man who packed a huge amount into his life. He was a solicitor by profession but also a very good rugby player. Richmond was his first club, where he usually played at full-back. Northampton Saints was where he made his name. He first played for them in 1907.

The Saints team he joined was a special one, under the captaincy of the legendary, charismatic Edgar Mobbs. Under his leadership Saints became one of the best teams in the country, with a glittering backline including Joe Beasley and Teddy Cook. Harrison was their fly-half, unleashing the dashing three-quarters.

It was a Saints team made in Mobbs’ image – cavalier and adventurous but also enormous fun off the pitch. Harrison’s first experience of Saints was on tour to Devon in December 1907 but he joined them on a more permanent basis the following season. He was good enough to rise through the levels, soon playing for the East Midlands. In 1909 he was part of the Combined Midlands team that defeated the touring Wallabies – their only defeat on English soil. He was, in the words of the Northampton journalist Tommy Mitton, “a bull dog who never knows defeat, tackles in the most deadly fashion, and can get through a crowd better than any half I have seen this year….One can never understand why he did not get his cap.”

The England cap never came, despite playing in trial for both the South and the North. He is, however, a British & Irish Lion. In 1910 Major RV Stanley organised a Tour to Argentina under the captaincy of the England international and Surrey cricketer John Raphael. The squad was made up of 19 players – 16 Englishmen and three Scots. To contemporaries it was described as an “English XV” or a “Great British XV”, but it is now recognised as a Lions Tour.

With Harrison at fly-half, making him Lion number 158, six matches out of six were won by these rugby pioneers. Of greatest significance was the match played on 12 June 1910 in Buenos Aires at the Sociedad Sportiva ground. The Lions beat Argentina 28-3 in what is now considered to be Argentina’s first international, with Harrison kicking a couple of conversions and a penalty. 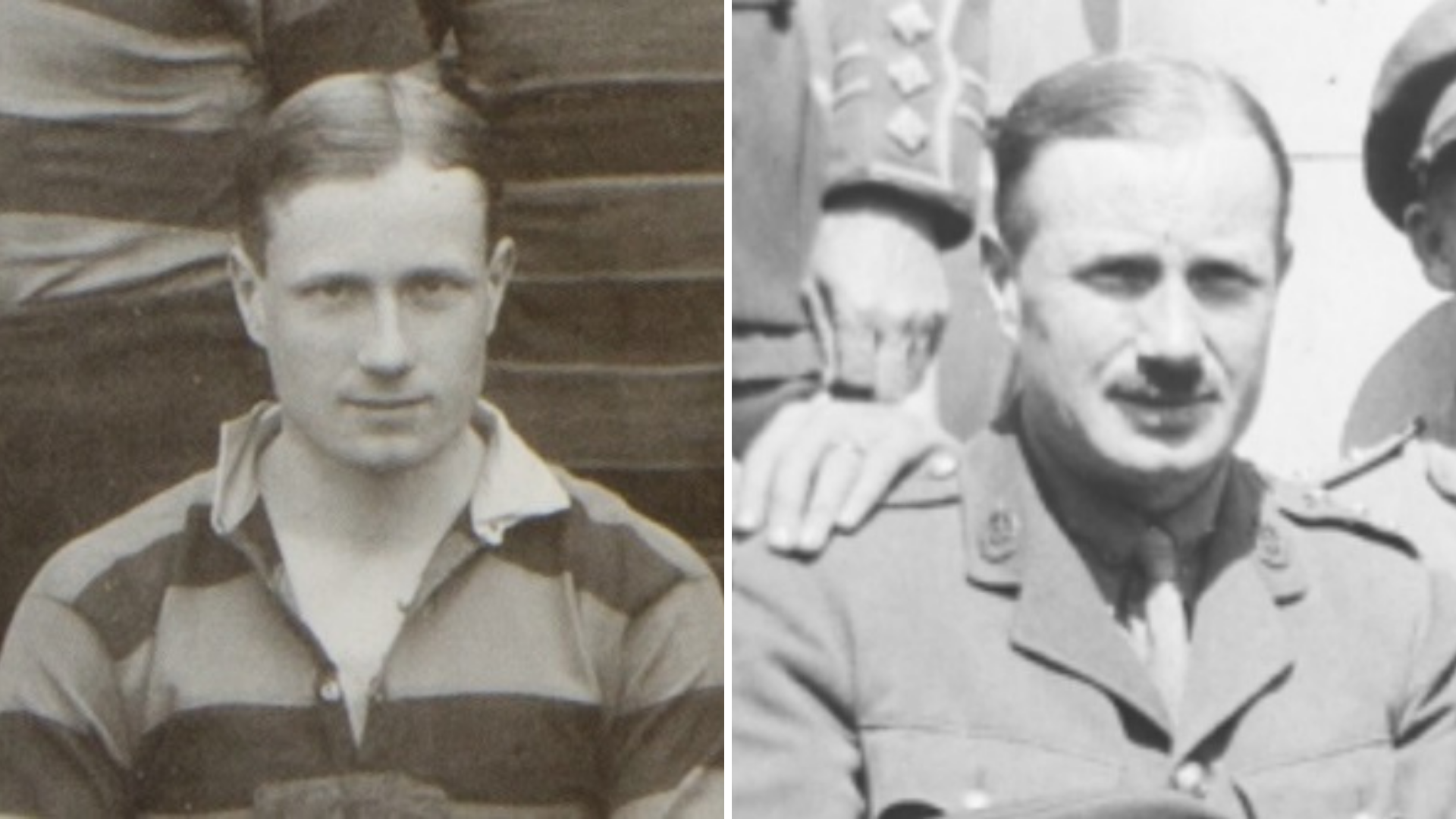 It was a happy and successful trip for the Lions – and has since been termed as one of the three “lost Lions Tours”. The Tour’s organiser, Major Stanley, was impressed, observing that although Association football was dominant in Argentina, “the quality of the rugby play is very good indeed. The natives were particularly strong and there is a tremendous amount of talent.”

Harrison returned to England to have another couple of years with Saints before emigrating to Canada to take up a partnership in a law firm in Manitoba. He should have settled into a quiet life with his wife and expanding family. He joined the local territorial army and enjoyed to hunt and keep bees. But like many of his generation, the First World War changed everything.

Harrison returned to Europe in 1916, joining the 5th Battalion (Western Cavalry). A few months were spent with the battalion on the Western Front, in and out of the trenches around Vimy, before he was called up to Brigade as an orderly officer. Then in January 1918, things suddenly took a rather unexpected turn for Harrison.

His army service record is a typically dry, administrative document, recording the basic details of his war. One line, however, stands out, written in an ornate, clerical hand: “15 January 1918 – Proceeded on a Secret Mission”.

Harrison volunteered for something which became known as Dunsterforce. With Russia out for the war, the Allies were concerned that the Turks and Germans would attack through Caucasus region (between the Black and Caspian Seas), not only seizing the oilfields but also potentially threatening India. Harrison was to be part of a small army under the command of General Lionel Dunsterville (hence Dunsterforce) that would be sent to the region to organise resistance. 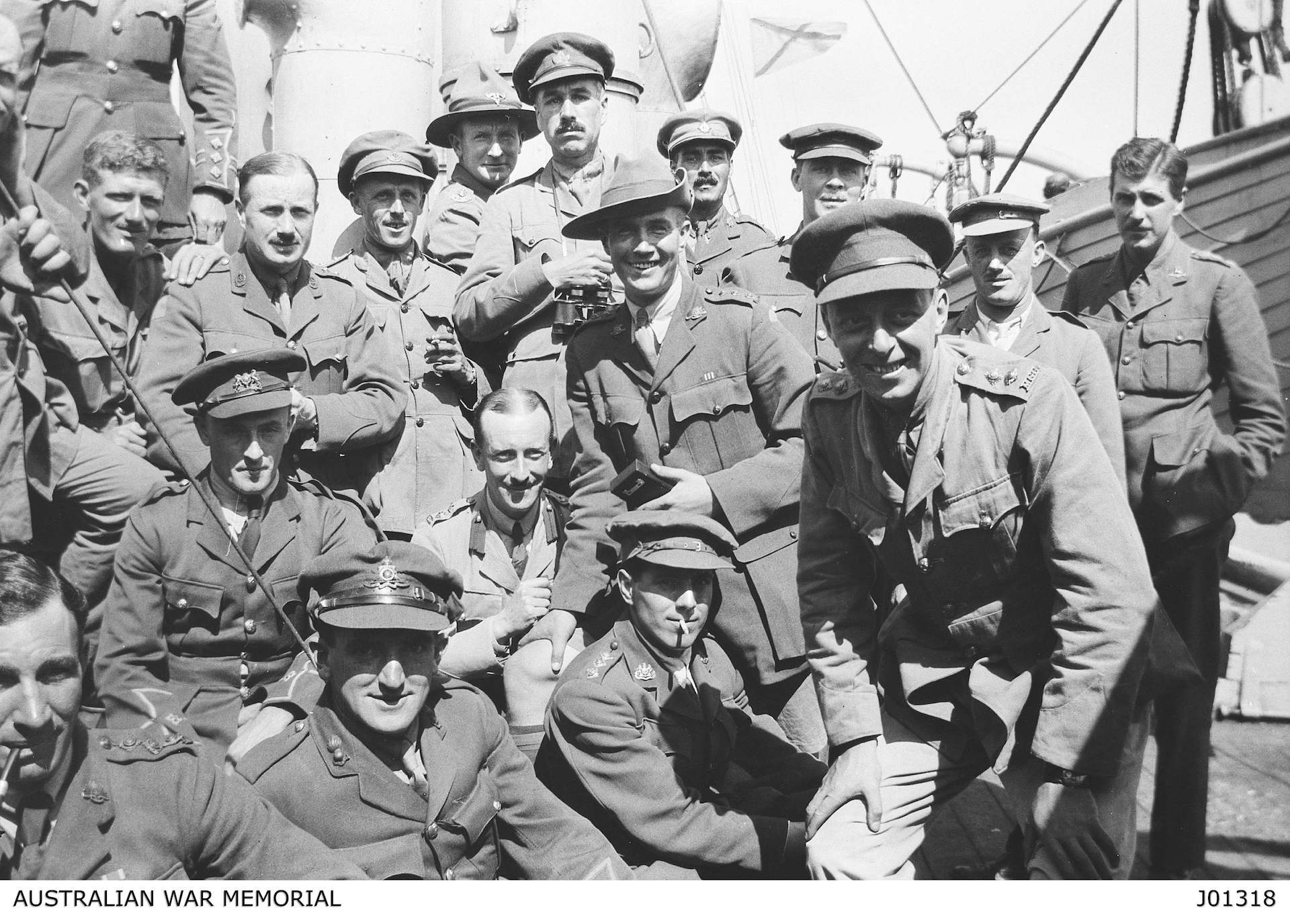 The story is like something out of the pages of a John Buchan novel. These soldiers – initially 150 officers and 300 NCOs – were some of the best that Canada, New Zealand, Australia and Britain could muster. They travelled across Europe to Mesopotamia and Persia (Iraq and Iran). They would encounter Russians, Turks, Armenians, Assyrians, Kurdish tribesmen and American missionaries, all the while battling not just the enemy, but also the hostile conditions, famine and dysentery. They travelled on foot, on mules and in Ford Model T Fords specially adapted. In short, they were early Special Forces.

Their stories are too numerous to tell in full. By August 1918, much to his delight, Harrison found himself commanding a battalion of irregular Armenian soldiers defending the city of Baku. To his surprise, when the attack came at the end of August, his Armenians fought well. Working alongside a battalion of around a thousand Cossacks and some British infantry, they held the line. “The Armenians did a good day’s work,” he later wrote. “As long as I was with them, they appeared to be willing to fight. Towards the evening the Turkish attack petered out and we felt rather pleased with our conduct.”

Despite the success of Harrison and the 24th Armenian Battalion, things had not gone so well elsewhere and by 1 September a withdrawal back to the outskirts of Baku was inevitable. In the last days before the fall of Baku, Harrison found himself on the far left of the defensive line, organising six Armenian battalions. He was relieved on 10 September, being employed instead at headquarters decoding messages, learning as he did that the Turkish forces were swarming towards Baku. 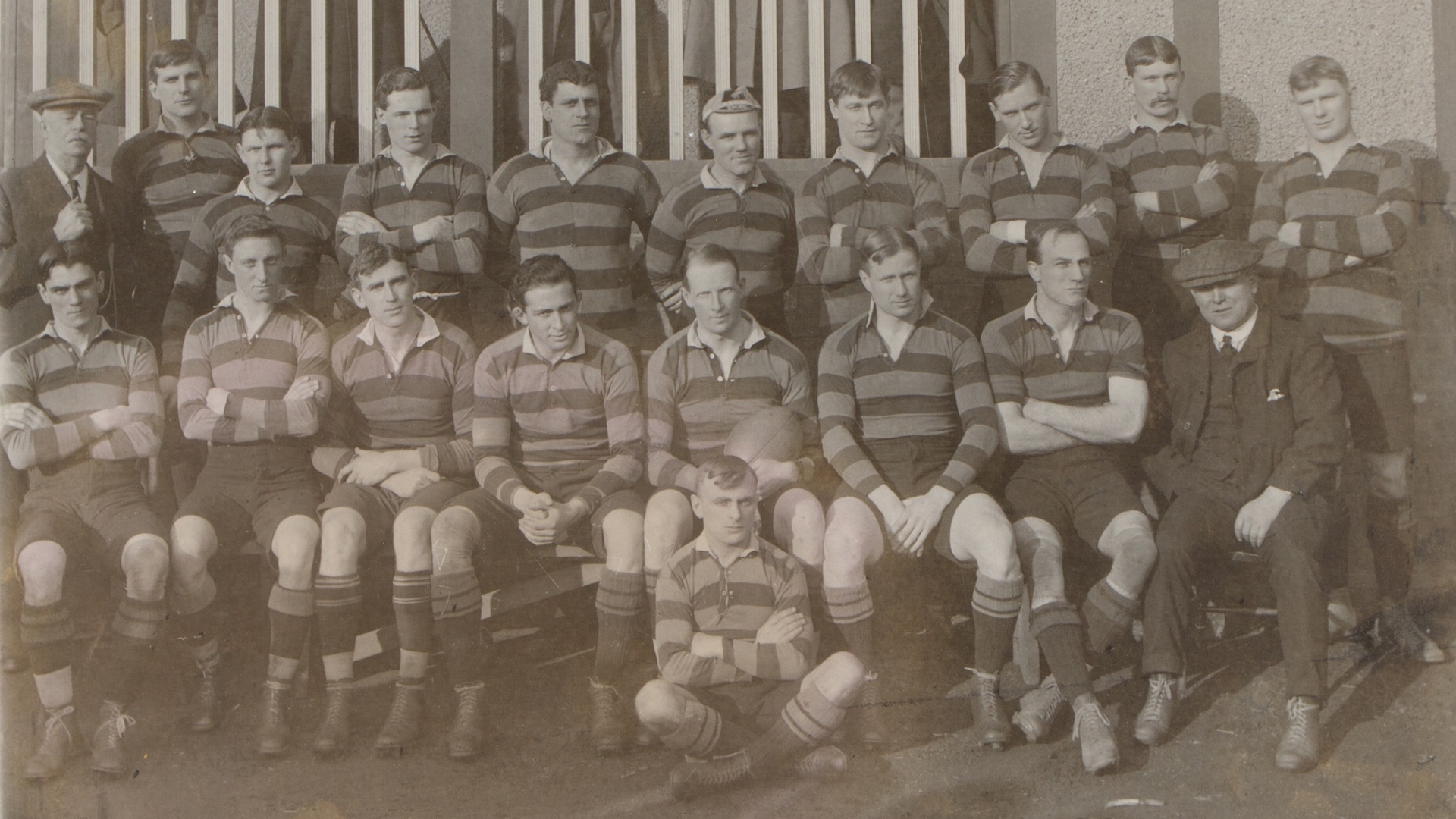 It was time to leave. With the city in chaos and the population panicking, Harrison was given the job of organising the men as they boarded the ships before it was his turn. They sailed away to safety while Baku burned. Harrison went back to Persia and then from there to England, returning to Canada in July 1919, picking up his life once more as a solicitor in the small town of Minnedosa.

Harrison died in 1953 at the age of 70. “To people of the younger generation he was almost a legend,” wrote the local paper in Minnedosa. “He had walked and talked and served with the great in many places, yet he was never too busy or impatient to talk to his humble neighbours. Robin Harrison will no longer climb from his comfortable bed and journey forth into the mists of autumn to hunt the geese and ducks he alone could cook so well… He was above all a great gentleman.”

A great Lion too who deserves to be remembered not only for being a rugby player and a very brave soldier, but someone who clearly lived his life absolutely to the full.