“I would rather have been taken off at half-time for playing poorly, than to have won man of the match and lost, to be honest.” [more] 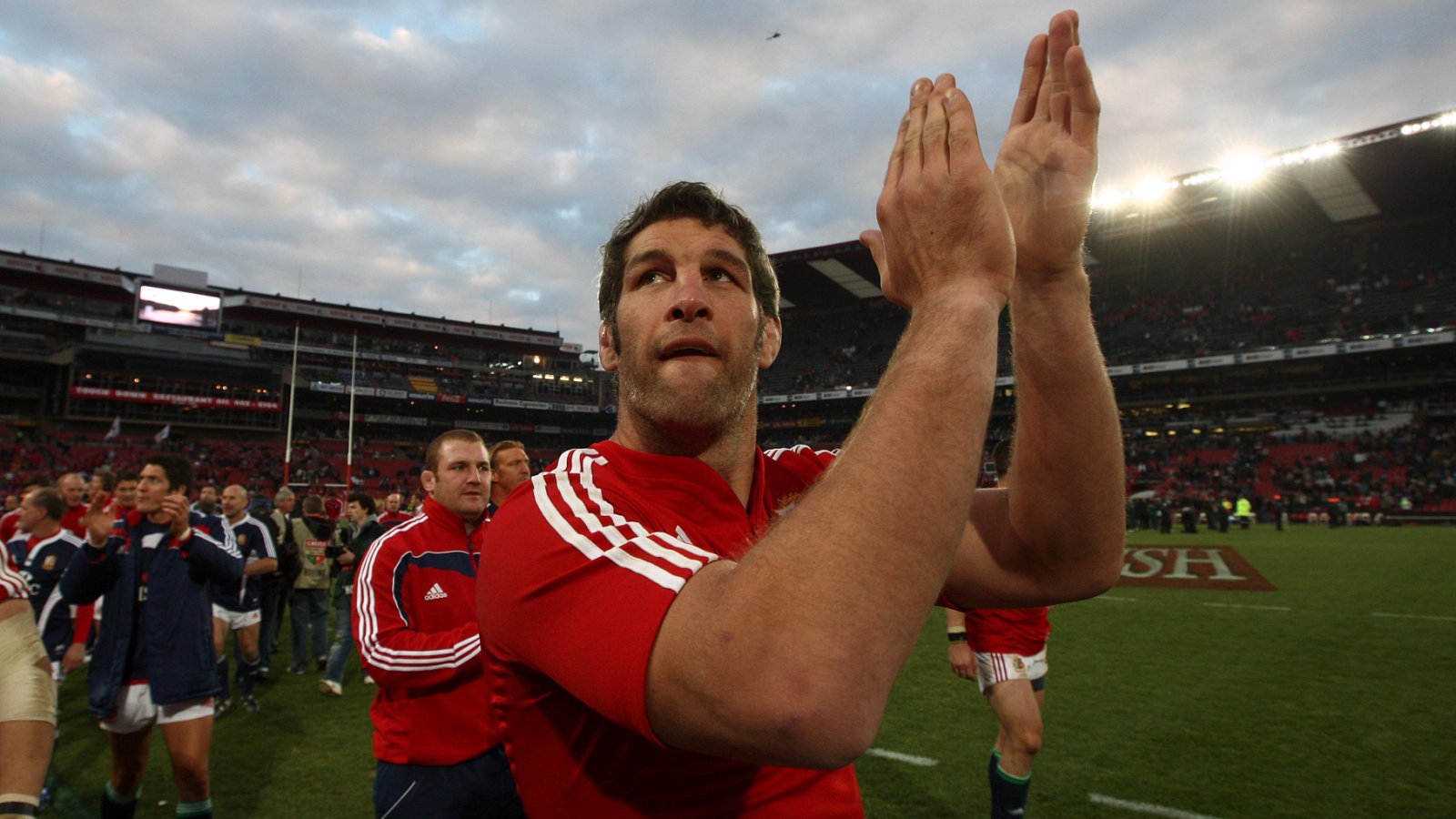 Great sporting stories occur when an individual or a team suffer setbacks but never abandon their dream. When they finally accomplish that vision, it makes the story even more powerful.

Simon Shaw and his relentless pursuit of becoming a Test Lion, which at the age of 35 and on his third Lions Tour as a player he finally accomplished, is such a story

His rite of passage to a Lions Test cap begins in 1997. Shaw was by then an England international, having been capped the year previously against Italy.

Shaw and Martin Johnson had built up a powerful second-row partnership and England had won Five Nations Triple Crowns in 1996 and 1997.

To nobody’s surprise, Shaw was selected by Lions coach Ian McGeechan in the playing squad for the Tour to take on reigning world champions South Africa. 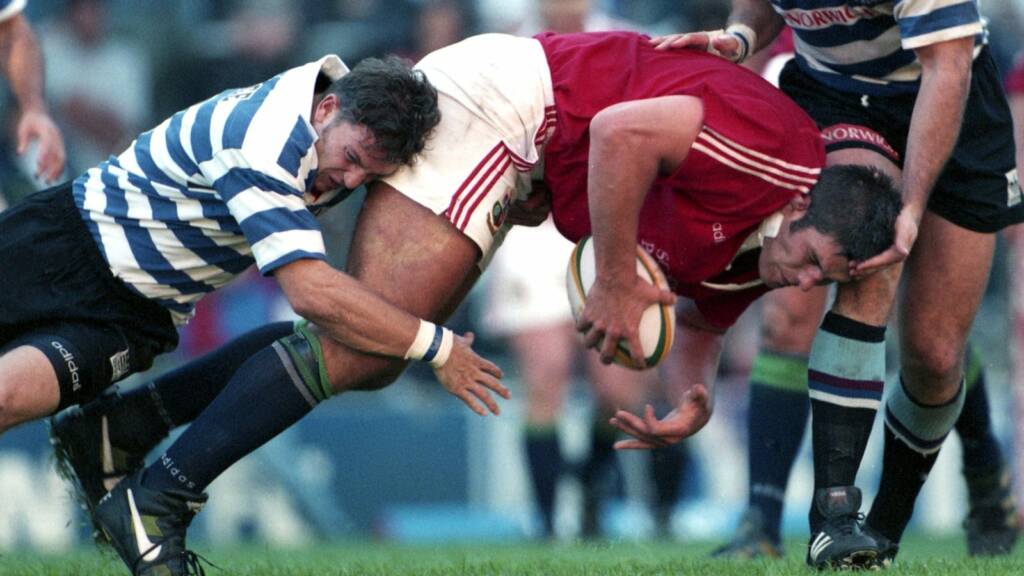 Many rugby writers felt before the trip that Johnson, who was named as Tour captain, and Shaw would be the Test selections in the second row. However, McGeechan and his coaches had other ideas.

With Johnson’s place assured, they were looking for a lighter, more athletic partner for the skipper. Someone who could soar in the lineouts without enormous exertions for the supporting lifters, who could then use their energy in other matchday requirements.

That person was Ulsterman Jeremy Davidson and the pairing played in all three Tests with massive success in a fantastic winning series for the Lions.

Shaw did start several times on the Tour, performing commendably in games such as the wins against Western Province and Natal Sharks. 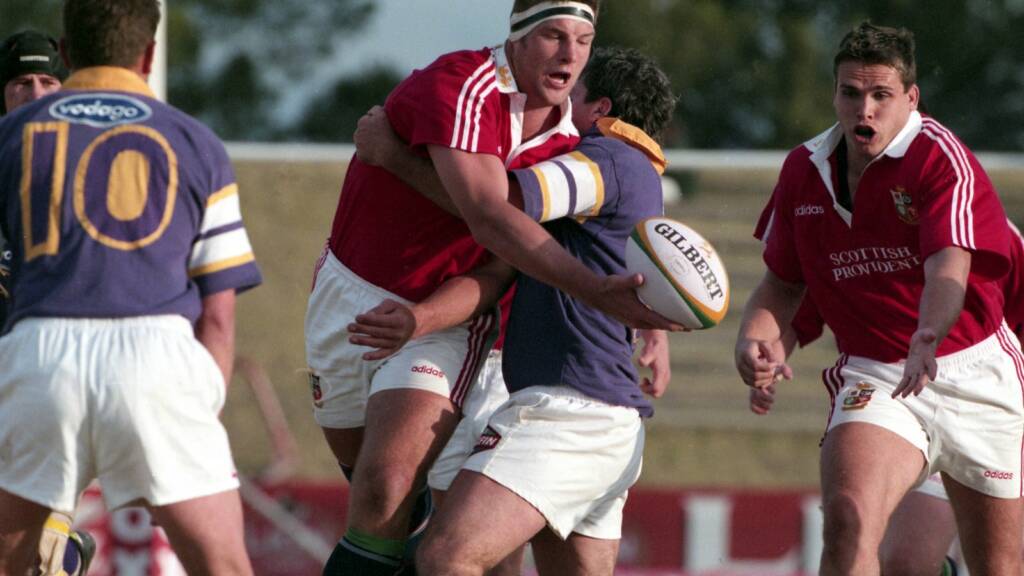 He ultimately would have to wait to become a Test Lion, and at that juncture he could surely have had no notion that it would take 12 years and a return to South Africa to grasp that dream.

By the next Lions Tour in 2001 which travelled to Australia, Shaw had fallen down the pecking order for England. The lock positions were very competitive with players such as Danny Grewcock and Steve Borthwick vying to play alongside ‘Johnno’.

Shaw hadn’t featured in the 2001 Six Nations – although he did start in the postponed match against Ireland after the Lions Tour, where England were denied a Grand Slam – so when Lions coach Graham Henry announced the Lions squad it was hardly a complete surprise not to see Shaw’s name on the list.

Shaw, by now 27, must have started to wonder whether another Lions Tour was a possibility? He was undeniably an excellent player, but one whose international career was at that time, more often than not, as a squad player.

Clive Woodward and England were building a settled side bound for Rugby World Cup glory in just two years’ time.

In 2005, the Lions were going to visit New Zealand. Woodward was named as coach and even in a large 44-man playing squad, there was no place for Shaw on the plane. 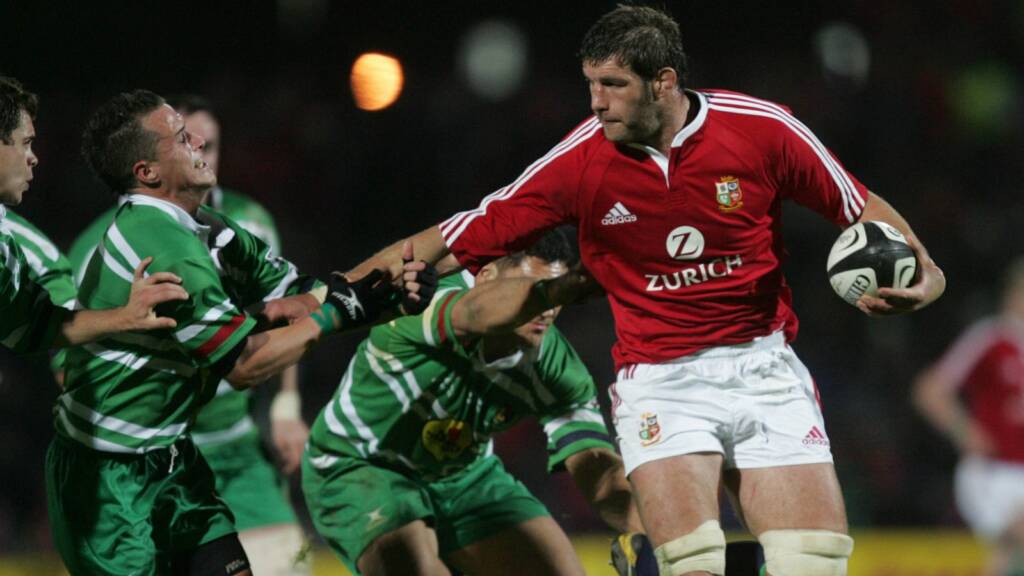 The lock forwards called up ahead of him were Grewcock and Ben Kay from England, and Donncha O’Callaghan, Malcolm O’Kelly and Paul O’Connell from Ireland.

It was a Tour where not much went right for the Lions. Even before the first game in New Zealand, injuries had occurred, and one such event ended O’Kelly’s Tour.

Woodward had no hesitation in calling up Shaw as a replacement – a man he knew well from his time as England coach and who had been instrumental in London Wasps’ Heineken Cup triumph the previous year. Would Shaw now finally get his Test cap?

Alas, no. In all three Tests, each of which New Zealand won convincingly, Shaw would not break into the matchday squad.

Woodward instead chose O’Connell and Kay to start the first Test, O’Callaghan and O’Connell for the following two, with Grewcock for the first Test and then back-rower/lock Martin Corry for the second and third Tests providing the bench cover.

Shaw did once again appear in a handful of the Tour’s midweek matches however. 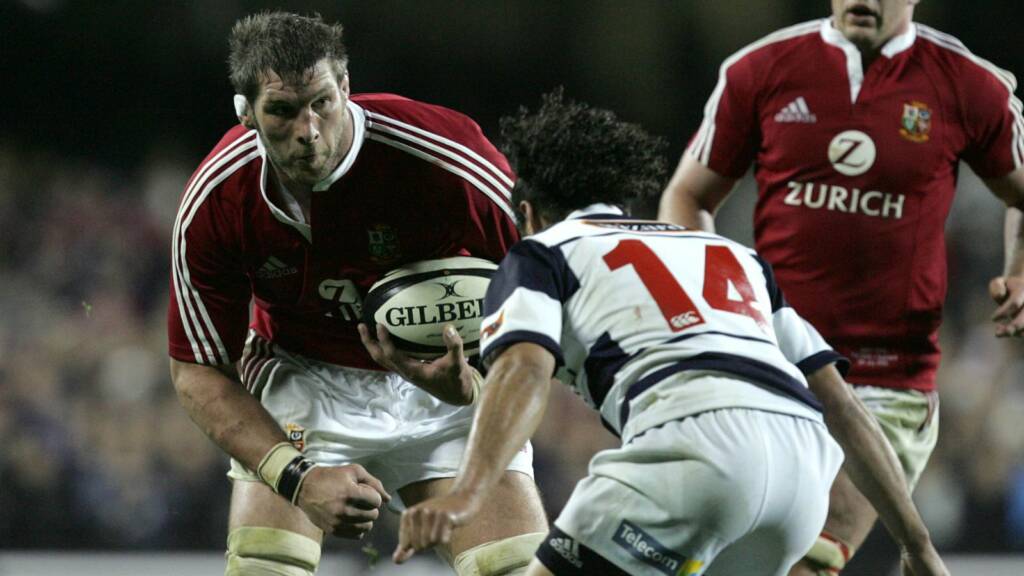 Shaw was by now almost 32 years old, starring on the club stage, and was in or around England set-up, but other younger lock forwards were coming through. It seemed to many that his moment in a Lions jersey had come and gone.

But Shaw was continuing to play at a very high level.

In 2007 he was part of the London Wasps side that won the European Cup for a second time, and at the end of that year, due to his performances, he also starred for England at the Rugby World Cup, where he played the full game in the narrow defeat to South Africa in the final.

On the international stage, he was competing with Nick Kennedy for the right to partner Steve Borthwick in the second row and was getting his fair share of game time.

Come 2009, Warren Gatland was named as Lions coach and in his announcement for the playing squad was none other than 35-year-old, Simon Shaw.

He had earned selection for a third Lions Tour, a noteworthy accomplishment in itself, with O’Connell (the Tour captain), O’Callaghan, Scotsman Nathan Hines and talented Welshman Alun Wyn Jones the other out-and-out locks.

Once again, the odds seemed stacked against Shaw to get into the Test shakeup. However, with form, results and injuries all in the mix it was certainly conceivable. 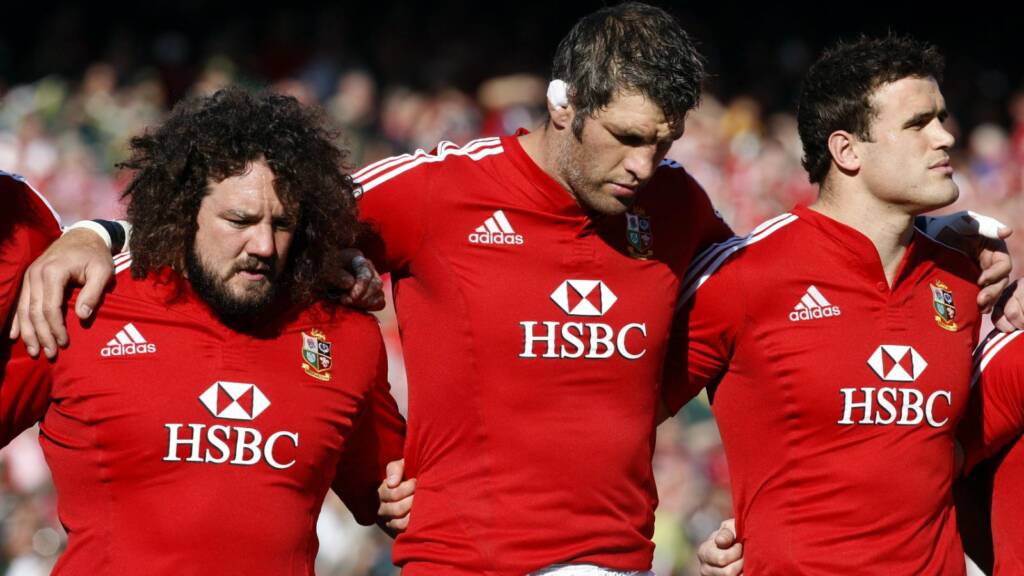 Come the first Test in Durban, Gatland chose the pairing of Jones and O’Connell to start, with O’Callaghan on the bench.

It turned out to be a bruising Test match and one which eventually the reigning world champions Springboks edged 26-21 after building a first-half lead.

It was evident that the Springboks pack – and especially the starting front five of Tendai Mtawarira, Bismarck du Plessis, John Smit, Bakkies Botha and Victor Matfield – had got the upper hand over the Lions.

The Lions had pushed them close but they needed some extra muscle, so Gatland made a few changes – one of which was that finally, after 12 years of waiting and back where it all started, Simon Shaw would start a Test match for the British & Irish Lions. 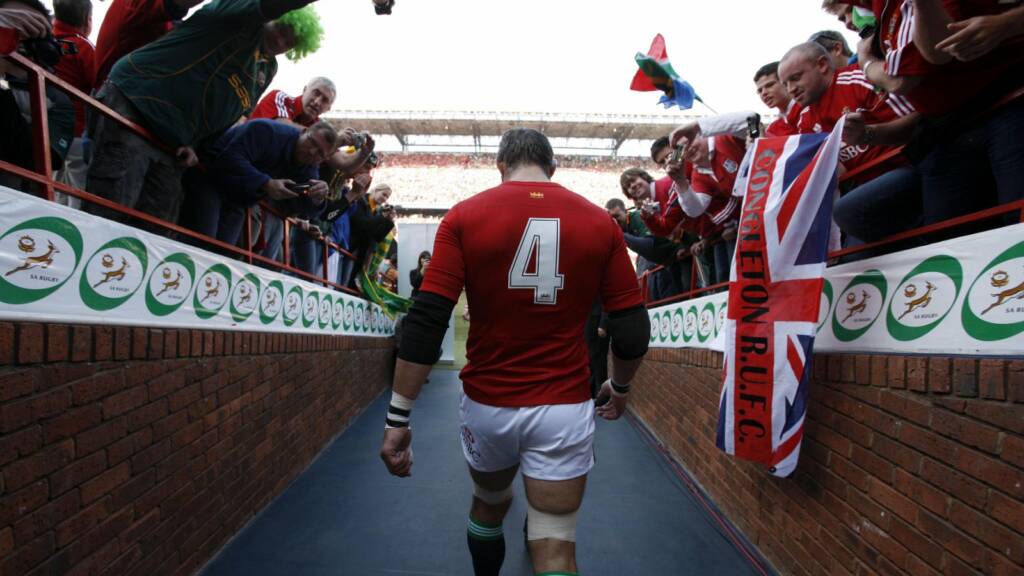 Shaw was needed for his size, his scrummaging and his exceptional defensive work at rolling mauls, which was an area South Africa had exploited in Durban.

The second Test in Pretoria will forever be recalled as one of the greatest Lions matches.

In a brutal, physical game, Shaw was simply magnificent. On a storied all-time list, his performance has to rank among the very best individual Lions displays.

His 6ft 8in, 19st-plus frame seemed to everywhere – in both defence and attack. 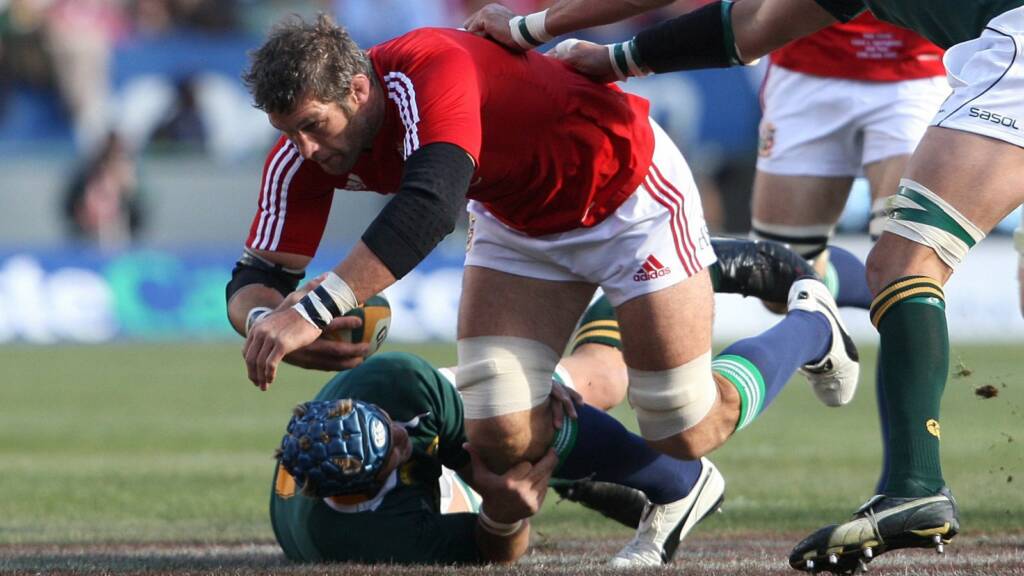 He was like a man possessed, his wait for a Lions Test appearance was ended and now he was going to make the most of it. Unfortunately for Shaw and the Lions, they came up just short with a last-gasp, heart-breaking penalty sealing their fate courtesy of Morne Steyn’s boot.

Shaw was selected as man of the match, illustrating just how impressive his performance was despite the defeat.

In the Sky Sports interview after the game, you could feel the raw emotions within Shaw emanating from the TV screens.

Interviewer Graham Simmons began with the words “big boys don’t cry” but from early in the piece, you could see how emotional Shaw was.

Perhaps no line sums up the veteran lock’s inner turmoil better than this: “I would rather have been taken off at half-time for playing poorly, than to have won man of the match and lost, to be honest.”

Shaw had fulfilled his dream to win a Test cap for the Lions but he was on the losing side after giving so much.

Simmons and Shaw’s hug at the end of the interview captured the admiration the interviewer had for the player perfectly.

Shaw was to play in the third and final Test against South Africa and put in yet another immense performance, tainted only by a clash with Fourie du Preez which earned him a yellow card and a two-week ban.

The Lions fully deserved their 28-9 victory, and it was fitting that Shaw got to experience the winning side of a Test match in the red jersey.

The series was lost, but the bare minimum the tourists deserved was at least one Test victory, so some consolation at least was earned. 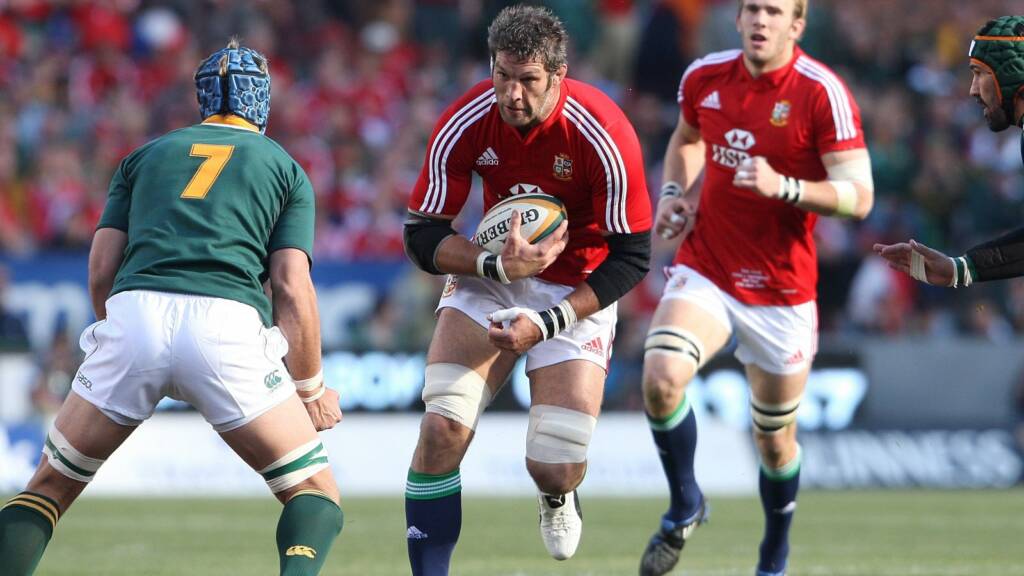 Simon Shaw, Lions number 667: 15 starts and four appearances from the bench. Within those numbers, are the two caps as a Test Lion.

A player who went on three Tours with the British and Irish Lions and at the age of 35, turned in an individual performance to be remembered for many years to come.

A man who never quit on his dream to be a Test Lion, and showed us all just what it meant to him on live television.

Keep striving to reach your goal no matter what obstacles are in your way.

Simon Shaw. Test Lion. An inspiration to us all. 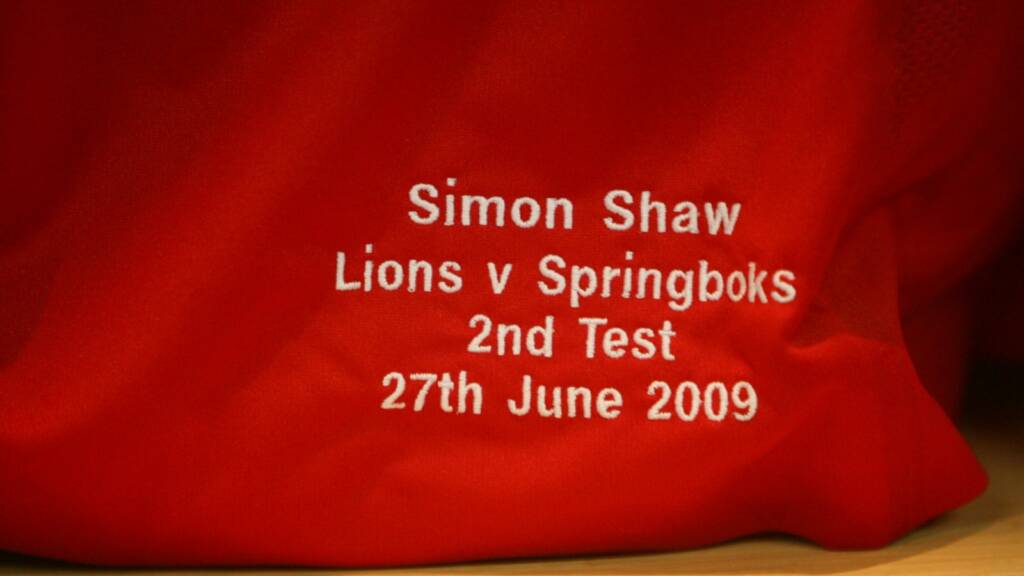 This article was part of the British & Irish Lions Freelance Writers Project.

Craig Muncey has written for various websites and magazines. A published author having co-written Matthew Rees autobiography, “Reasons 2 Smile” and he released his second book, Steve Fenwick’s autobiography, in 2020.