The Battle of Ballymore: Inside story behind the controversial 1989 Test 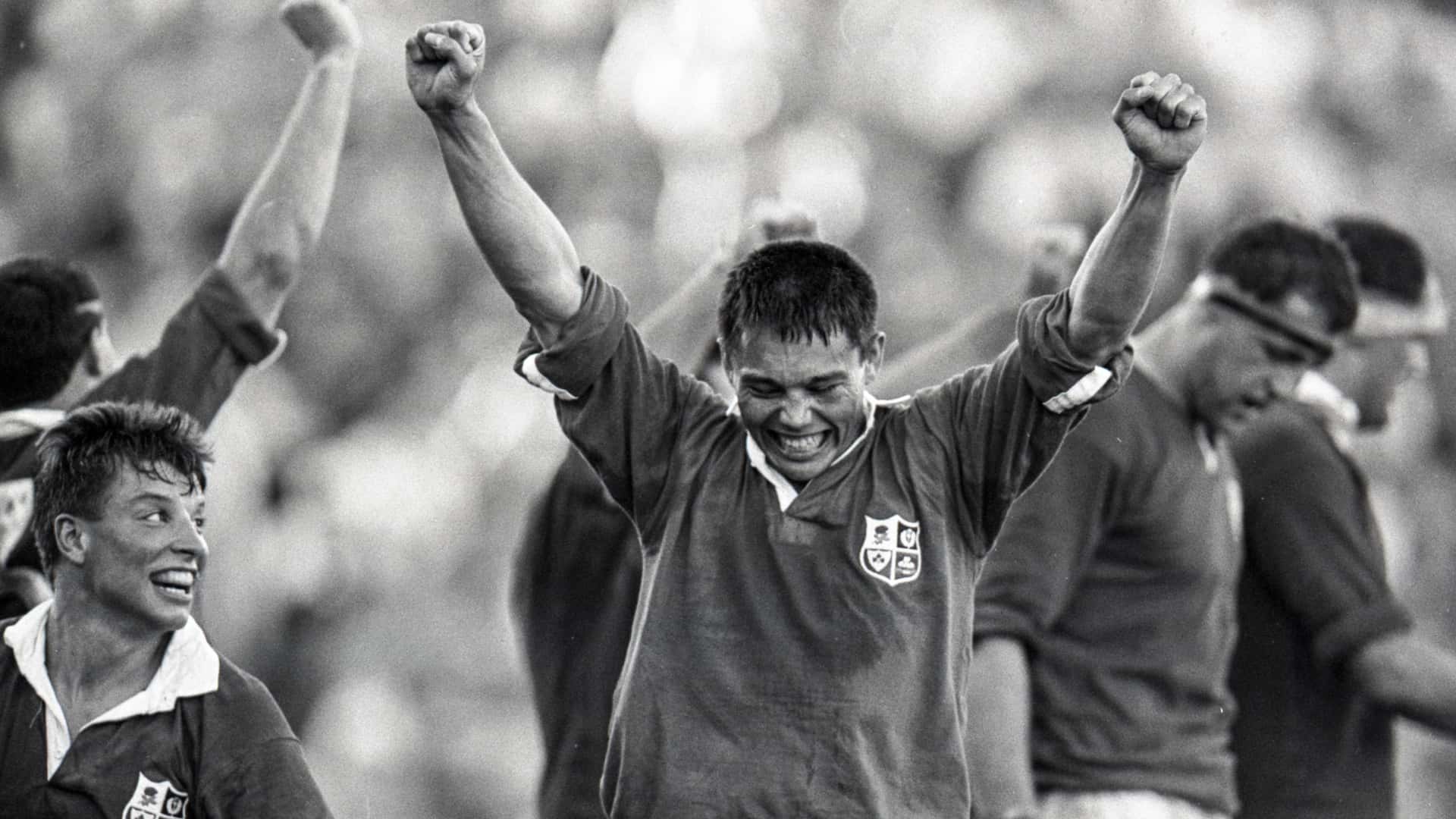 The second Test between the Lions and the Wallabies on July 8, 1989 remains one of the most controversial in more than 120 years of touring.

The Battle of Ballymore as it was aptly christened by the Australian press, is widely regarded as one of the most bruising encounters in the history of the game.

Victory over the soon-to-be world champions kept the tourists’ series hopes alive but it was perhaps the manner of the triumph that paved the way for victory in Sydney and the Lions’ crowning glory a week later.

The Lions lived up to their name, fighting tooth and nail and exerting their physical dominance over a Wallaby pack that had embarrassed them in the opening rubber just seven days earlier.

Sir Ian McGeechan’s men rattled their hosts both physically and mentally, never taking a backwards step as they demonstrated just how much the famous four union badge meant to this particular pride of Lions.

The Lions may have started their first Tour of Australia as a solitary destination for 90 years in perfect fashion by winning their first six games Down Under but they were brought back down to earth with an almighty bump in the opening Test.

Beaten 30-12 by a rampant Wallaby XV, the Lions were second best in almost every department, particularly up front.

Outplayed and outmuscled, the Lions left Sydney licking their wounds as Australia scored four tries to none in a disappointingly one-sided contest.

Worse could have followed just three days later when the mid-week side trailed the ACT Brumbies at half-time in Canberra. Defeat in between the first two internationals would have spelled disaster for the mood within the Lions camp but Donal Lenihan and co conjured up a stunning second-half comeback that produced a 41-25 victory and kept the Tour on track.

Inspired by ‘Donal’s Donuts’, the Test team arrived in Brisbane determined to make a statement and they did just that.

It was a case of all change for the Lions as they looked to bounce back from a potentially demoralising defeat in Sydney a week earlier.

Coach McGeechan wasn’t afraid to alter his thinking and his personnel as he axed five players from the starting side beaten so comprehensively last time out. 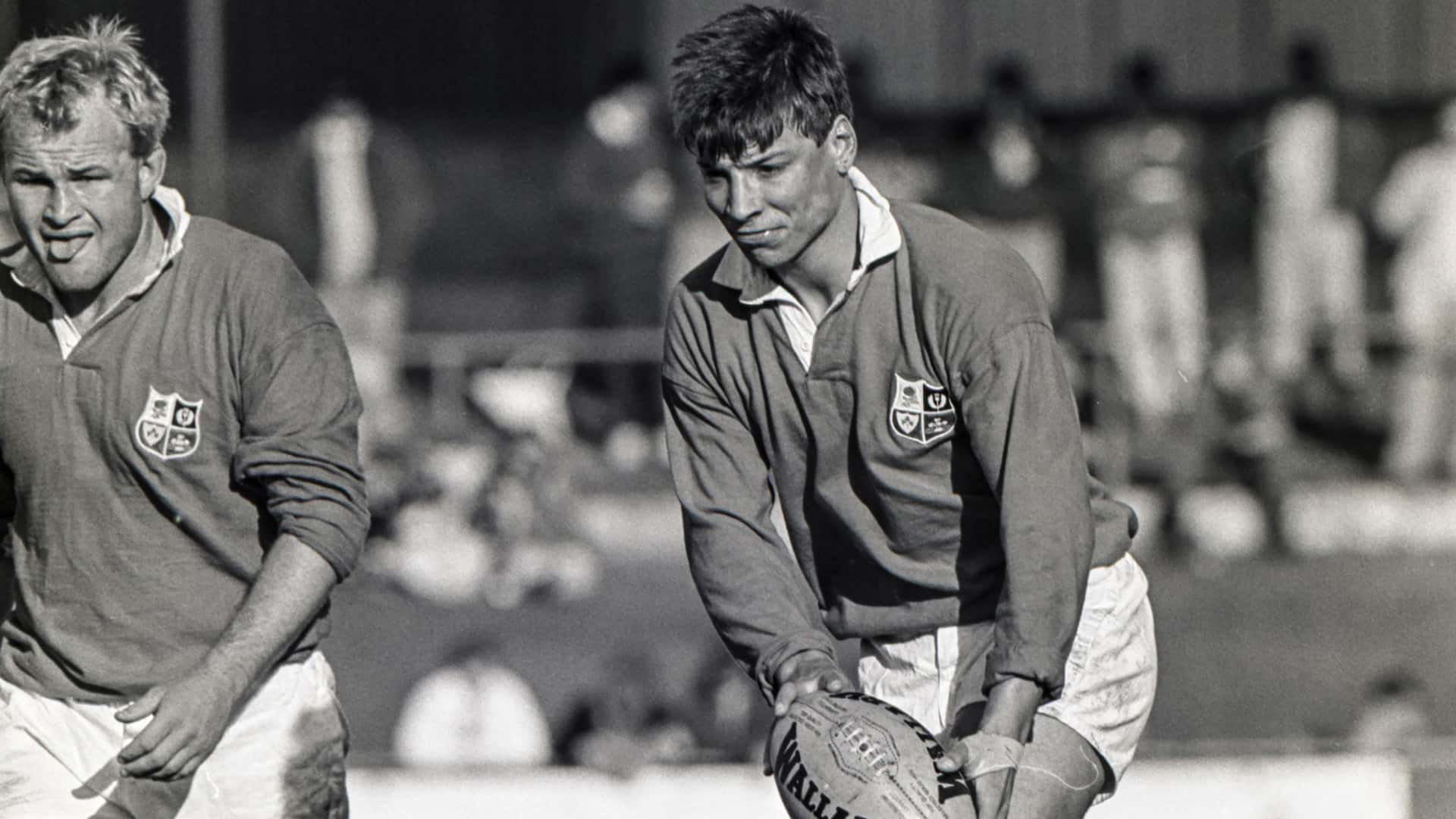 In came Scott Hastings, Jerry Guscott and Rob Andrew in the backs and Wade Dooley and Mike Teague in the forwards, while out went centres Mike Hall and Brendan Mullin, fly-half Craig Chalmers, lock Robert Norster and blindside flanker Derek White. All five alterations would prove to be inspired choices.

Andrew had only been called up to the party following an injury to Ireland’s Paul Deans in the first game of the Tour but the Wasps playmaker proved his worth with a commanding display in Brisbane.

The two midfield changes also helped transform the Lions into a more dangerous side behind the scrum, while the switches within the forward pack were arguably even more crucial to second-Test success.

The Lions had been out-fought and out-thought by the Wallaby pack last time out but Dooley helped shore up the lineout and Teague provided a real edge in both defence and attack. The Gloucester flanker had been unavailable for the opening rubber due to injury but he more than made up for his initial absence with a sterling performance at Ballymore.

Scott Hastings’ promotion to join Gavin in the Test team meant the Lions featured a pair of brothers for the first time since 1910, while the introduction of Guscott, Andrew, Dooley and Teague took England’s representation to eight. That number may have been three short of the record tally from 1889 and later in 1993 but it was their largest contribution for 16 tours and 81 years.

In contrast to England’s dominance in selection, Ireland missed out on participation in the second-Test altogether. Only four Irishmen had been invited to tour in the first place and with Deans sent home early on, Lenihan leading the dirt trackers and Mullin losing out to Guscott, it was perhaps no surprise, if not a little disappointing, that the team for Brisbane featured just three of the four Home Nations. 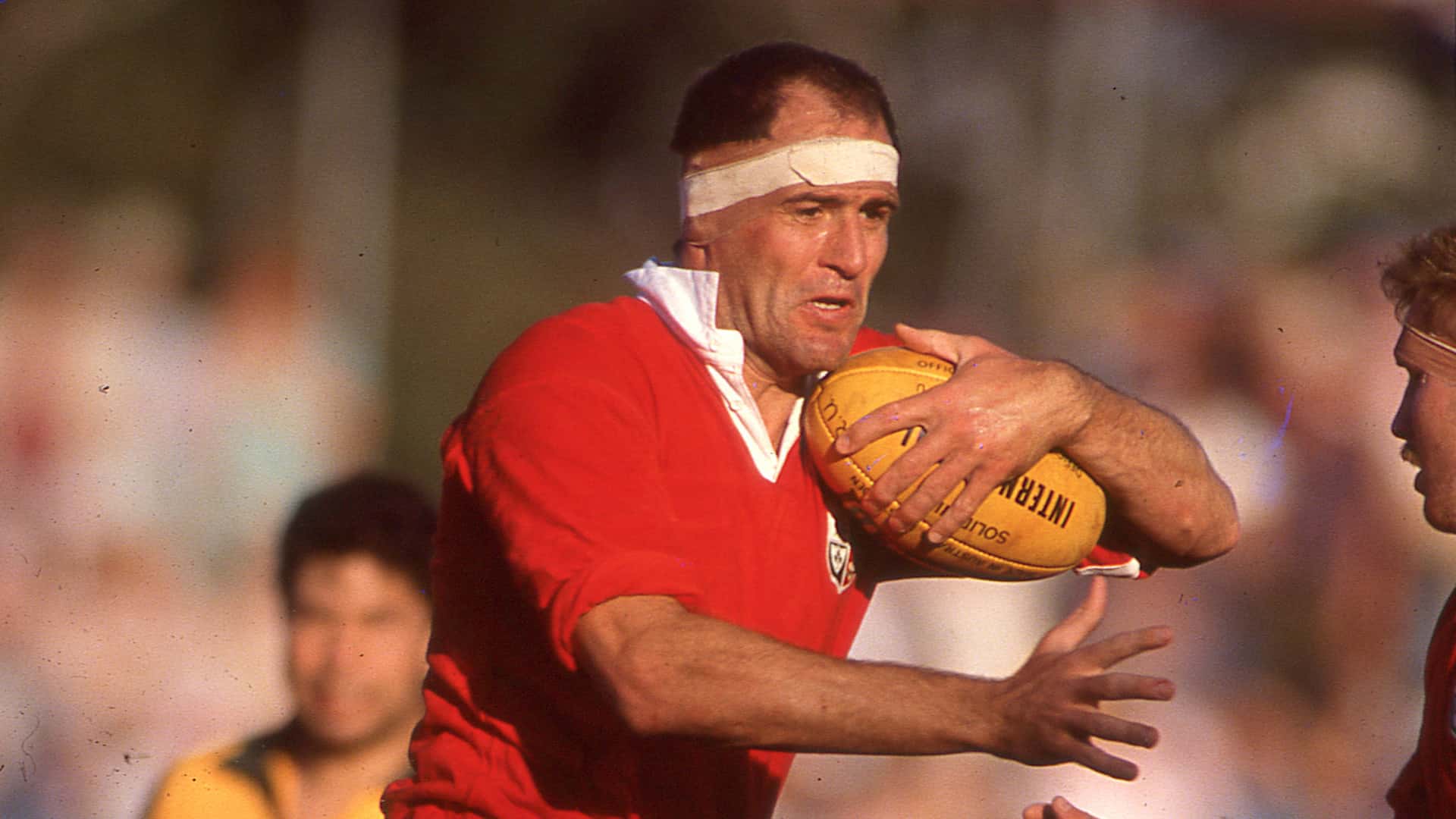 In stark contrast to our modern-day tours, seven of the Test team appeared in the win over ACT the previous Tuesday, giving them just three-and-a-half days recovery before the second international. Guscott, Scott Hastings, Rory Underwood, Andrew and Dooley all started in Canberra, while Dai Young and David Sole came on as replacements.

The Wallabies stuck largely with the side that had started the series so brightly, with just two changes being made for part two of what they hoped would be an historic triumph over Britain and Ireland’s elite.

Ian Williams replaced his New South Wales team-mate Acura Niuquila on the right wing, while Mark Hartill, a replacement in the first Test, came in for Cameron Lillicrap at loosehead prop.

Having been battered and beaten in the opening Test, the Lions knew they would have to stand up and be counted if they were to keep the series alive ahead of the third and final encounter.

Captain Finlay Calder and his men didn’t disappoint, with diminutive scrum-half Robert Jones one of the leading figures in the Lions’ successful attempt to reassert their authority over a Wallaby side full of confidence.

Just a minute after kick off, Farr-Jones got ready to feed the ball into the first scrum. What happened next is etched in Lions folklore. Opposite number Jones sneakily stood on his rival’s foot and the Aussie skipper just snapped. As the two smallest men on the field came to blows, the Lions forwards piled in and battle commenced. 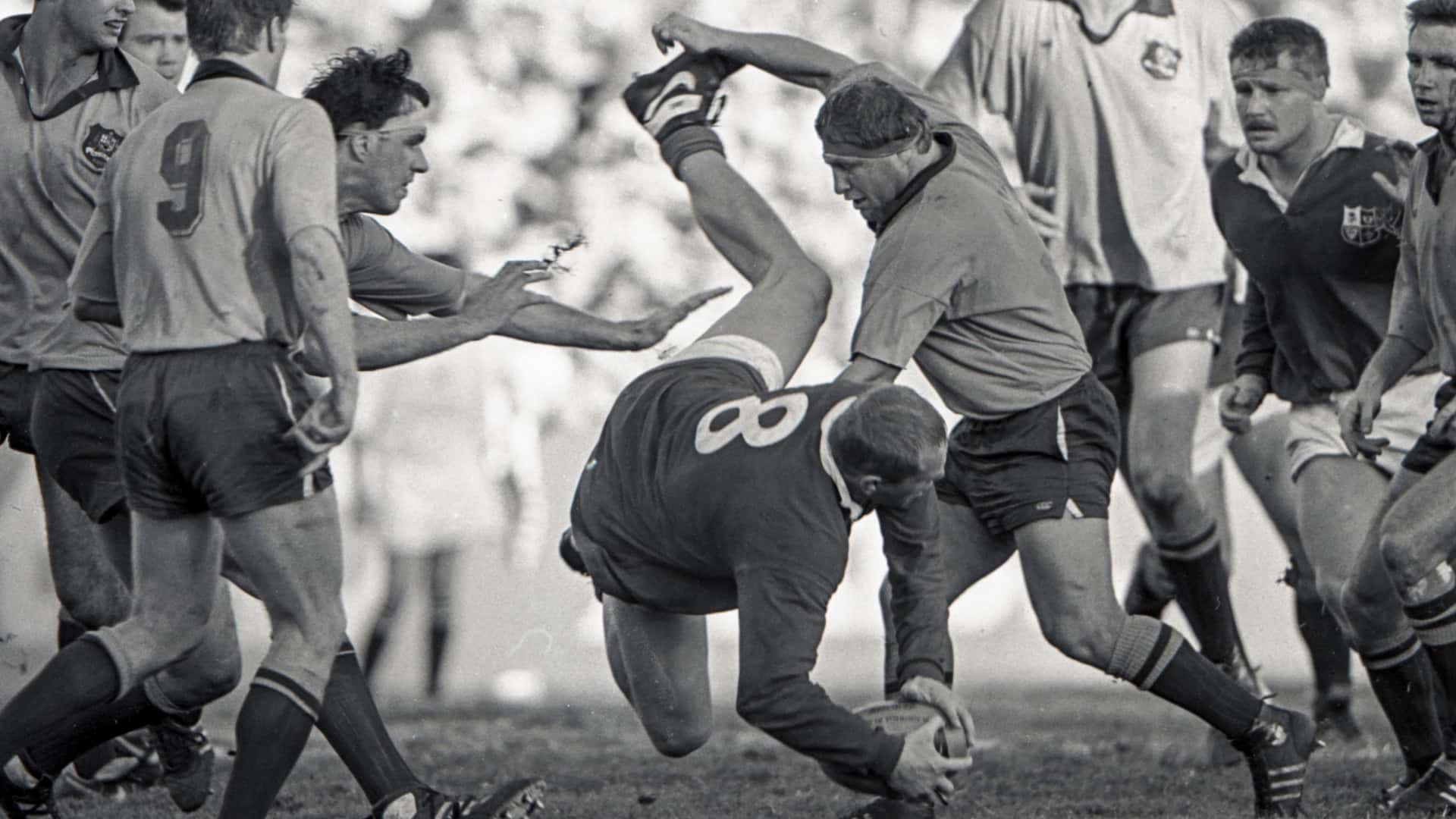 With referee Rene Hourquet attempting to separate the two number nines who had continued their scuffle on the deck, the Lions’ enforcers took advantage, waging war with the Wallaby pack and severely unsettling the hosts with a clear statement of intent.

Similarly robust confrontations occurred at regular intervals throughout the match, with Young later accused of stamping on the head of Australian lock Stephen Cutler in one of the most-controversial moments of the entire series.

There was no doubting who won most of the physical battles in Brisbane. The Lions imposed their will on the Wallabies and their physical prowess had a huge impact on the mental state of an Australian side not used to being ruffled up front.

But for all that is made of how this ‘one for all and all for one’ approach proved the decisive factor from the opening minute at Ballymore, the game wasn’t won until the final 10 minutes. In fact, the Lions actually trailed for the vast majority of the match and looked set for series defeat until a brace of late tries.

Australia led 12-6 at the break thanks an early converted score by full back Greig Martin – his second in successive weeks – and two Lynagh penalties compared to a single penalty from Gavin Hastings and an Andrew drop goal. The England fly-half narrowed the gap to three points with his first penalty of the day but the Wallabies were still 12-9 in front with just five minutes remaining. 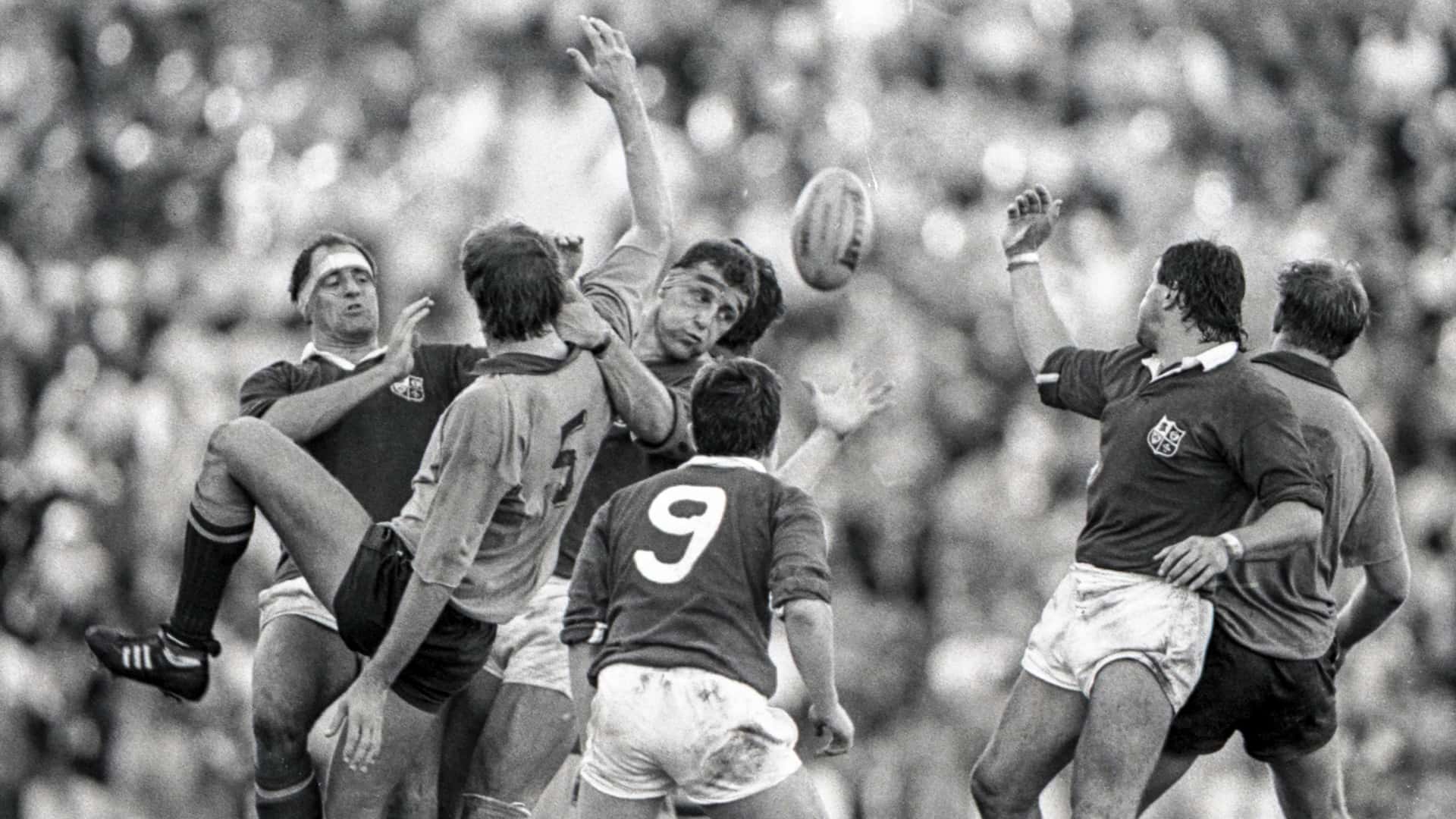 It was only then, in the dying stages and with desperation creeping in, that the dominance of the Lions forwards brought their attacking rewards. Until that point, the Lions had kept their opponents largely at bay but that they hadn’t created enough chances to turn the series on its head.

But suddenly the Lions struck twice in a matter of moments as first Gavin Hastings and then Guscott touched down to put the game beyond Australia’s reach. Victory had been snatched from the jaws of defeat and the Lions were back on track.

“I would describe it as the most violent game of rugby that has ever been played. We can’t be seen to condone what went on, but needs must. There were some hard players on that tour; hard men and they all came together and sorted the job out.”

“I don’t think I have ever been so wound up before a match, and that was before Finlay Calder’s special line in pre-match oratory which was likely to have you bursting with adrenalin for the first few minutes. I was aching to get grips physically with Farr-Jones.

“An opportunity came at the first scrum. There was nothing premeditated in the sense that I had decided exactly what to do beforehand, but I had gone out with the intention of doing something to unsettle him. It was a spur-of-the-moment decision to stand on his foot at the first scrum and push down. He came back at me, and within seconds there was a pretty lively punch up going on.

“Before the match, Finlay had emphasised that we were not to take a backward step, that we would tackle hard, put on physical pressure up front, ruck hard and drive the line-out. I knew that if there was any trouble, four men would come instantly to my assistance: Mike Teague, Paul Ackford, Wade Dooley and Dean Richards. And that is exactly what happened.

“The punch up set the tone for the match. Nick was very upset by the incident and kept chatting to the referee. The Australians in general were upset about our physical approach and it has to be said that things got quite brutal at times. It probably was the turning point of the match and the series. Nick Farr-Jones was distracted from his normal game and was not nearly as effective as he had been the week before.”

“Everyone was a bit tense and it doesn’t take much for something to kick off. We were always going to get stuck in but I don’t believe it was premeditated. The smallest man on the field starts the fight, how often has that happened? But from that moment on I genuinely believe that the Test series was won. They just looked at us and thought to themselves: ‘I don’t fancy this lot.’”

“I love Ian McGeechan and the “Battle of Ballymore” was great. Geech had worked it out and they won because of that. To say that it wasn’t premeditated is absolute nonsense. Robert and I may have instigated it but the Lions forwards piled in straight off. They knew what they were up to and we couldn’t match them. We were sort of shoulder barged out of the contest.

“I don’t gripe about it nor do I wake up at two in the morning in a cold sweat staring at the cracks in the ceiling, but there’s no denying it still crops up in my mind occasionally. In fact, it’s one of the biggest regrets of my career – that we didn’t win the series – and it all started there.”

“The consensus was that we would not take a backwards step and instead we took several forward steps with the first one coming from the right boot of Rob Jones who scraped his studs down Nick Farr-Jones’ shin while the Australian was putting the ball into a scrum. It was the weirdest thing. Farr-Jones retaliated and everyone just waded in. I scored the winning try that day but I don’t remember it because Farr-Jones had smacked me really hard.”

“When Australians start whingeing about intimidatory tactics, then you know you’ve got them on the run.”