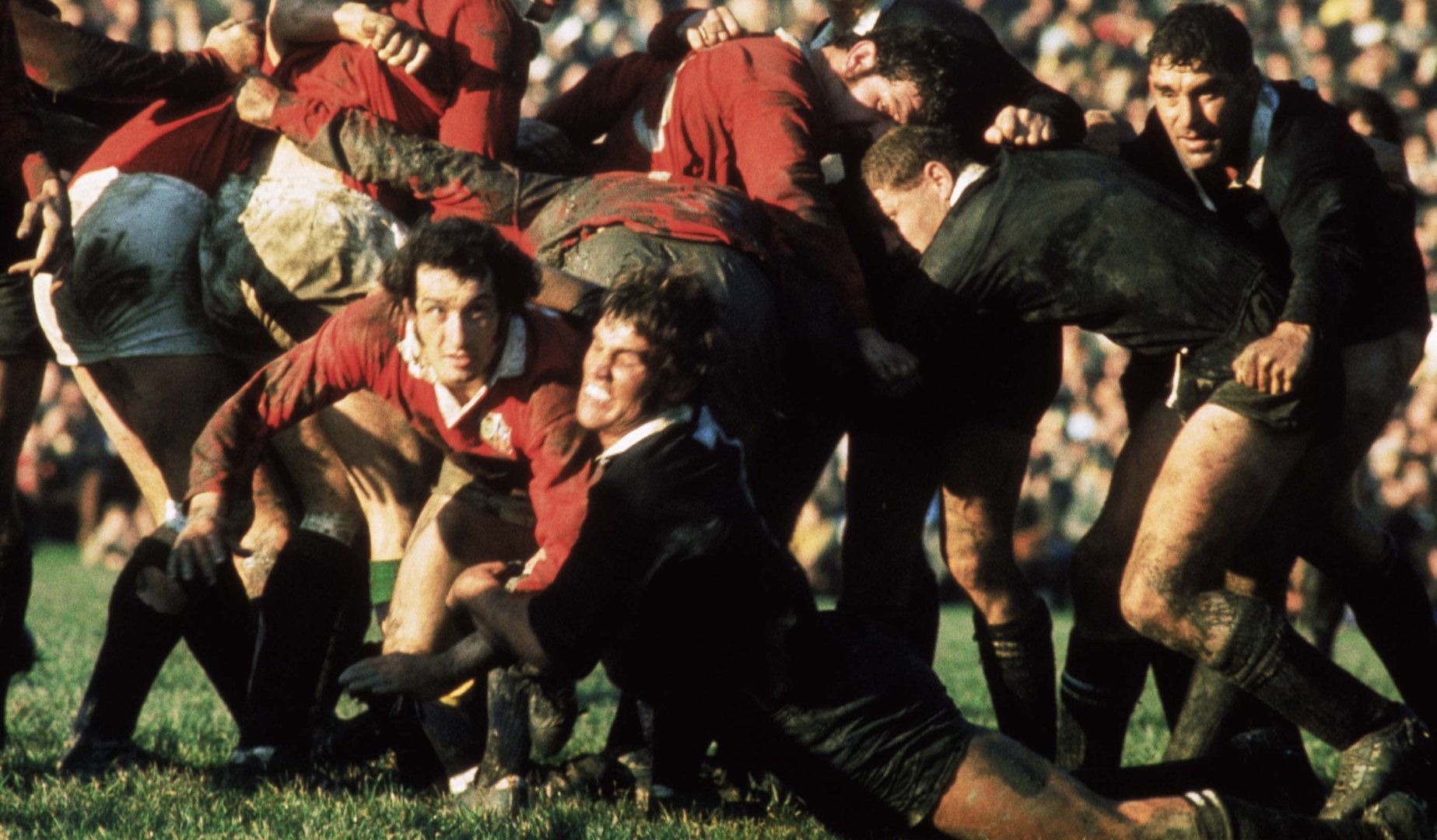 The Wales legend had an international career that spanned 11 years and went on three tours with British & Irish Lions, including the historic series victory in New Zealand in 1971.

After a forgettable first tour in a Lions shirt, with a 3-0 series defeat to South Africa in 1968, he started all four Tests during the 1971 tour of New Zealand in a memorable 2-1 series victory.

Four years on Edwards was again one of the stars, as the Lions won 21 of 22 of matches in South Africa, drawing the fourth Test to complete a 3-0 series success, avenging the winless tour six years earlier.

During that tour Edwards twice captained the side in international matches, against South West Africa and Rhodesia, now known as Namibia and Zimbabwe respectively.

Blessed with remarkable pace, power and vision, the scrum-half was such a gifted athlete that he would have excelled even in the modern game and is still widely regarded as the greatest player ever to play for Wales.

He was one of the inaugural inductees of the International Rugby Hall of Fame in 1997 along with Wales and Lions teammates Barry John and JPR Williams.

Edwards was one of a kind, but made such an impression on New Zealanders that he is still remembered more than 40 years on.

That is in part due to “that try” which he scored against the All Blacks for the Barbarians in 1973, which is still regarded as one of the best tries of all time. 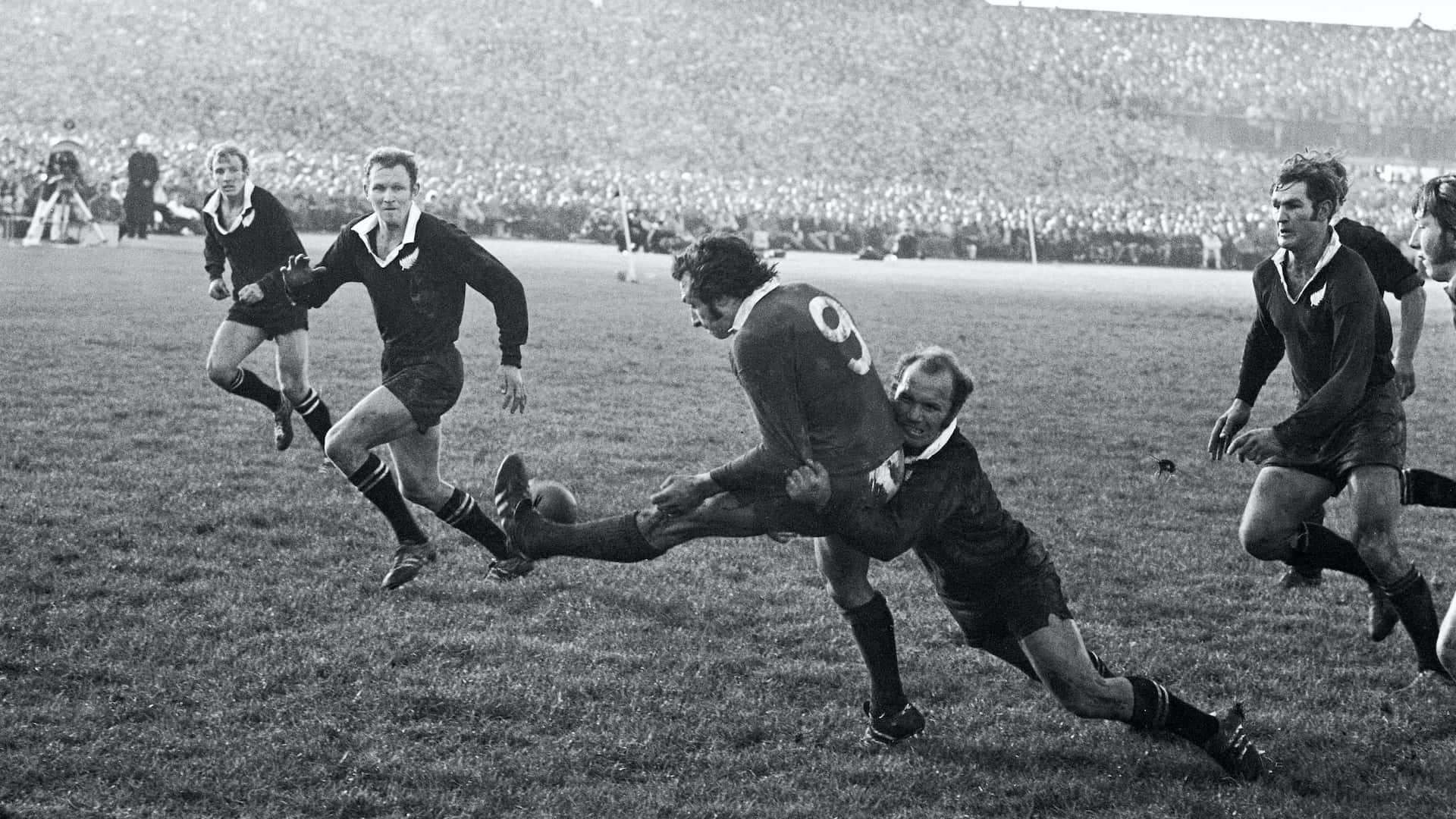 Edwards won his first Wales cap at the age of just 19, only a year before his Lions debut. He won 53 caps for his country and remarkably they all came in succession – he was never once injured between his first and final appearances in 1967 and 1978, nor was he dropped.

His tally of 20 tries in 53 appearances arguably shows why he was such a valued member of the Wales team.

He became Wales’ youngest ever captain in February 1968 at the age of 20, winning his first game in charge against Scotland.

Selection for the 1968 Lions Tour to South Africa soon followed and he started the first two tests against the Springboks, the second of which finished in a 6-6 draw, a result which ultimately prevented a series whitewash.

Despite coming up short in the Tests, the squad managed to achieve the Lions best ever provincial record in South Africa, as they lost only one of their 16 matches.

Three years later he started all four tests as the Lions won their first series in New Zealand in three-quarters of a century. That marked an astonishing turnaround, considering the All Blacks had triumphed 4-0 in the summer of 1966.

Edwards saved his best for last in 1974, as the Lions returned unbeaten from South Africa. Edwards played in the now infamous ‘Battle of Boet Erasmus Stadium’, often considered the most violent clash in Lions history as the Lions claimed a 26-7 victory.

He then bowed out from international rugby in style in 1978, winning the Five Nations Grand Slam in front of a home crowd at Cardiff Arms Park.

On the Lions team spirit…

“If I knew that I would copyright the formula, but it is uncanny how guys from different cultures and backgrounds actually did gel and bond and form a strong team spirit.

“When you think that people who spent years pasting each other come together and have to bond and find a unique spirit and camaraderie that goes on to last a lifetime, it is just amazing. But this is what is needed and what happened to us. It is easier to feel it than to try to explain it.

“My first Lions tour was in 1968 and most people didn’t even know we went. We lost that four-test series 3-0 with one drawn game. On reflection, that tour was where we all first realised what it meant to be a Lion and how the spirit was born. There was a nucleus of guys like Gerald Davies, Barry John and myself who were first-time Lions. We lost the series, but only lost one other game on tour.

“The series defeat actually helped us and gave us a desire to win and we did it three years later. When you win tours you are remembered for obvious reasons, but the Lions tours where you lose, that is where a true spirit and camaraderie which stands the test of time is born.

“When we won the series in New Zealand, a little-known fact is we went unbeaten in the provincial games, winning around 11. Not everybody played the tests, but everybody played in the other games on the Wednesdays and Saturdays. When you talk about spirit, it is about these guys who didn’t play in the tests, but they never gave up hope and gave it their best shot.” 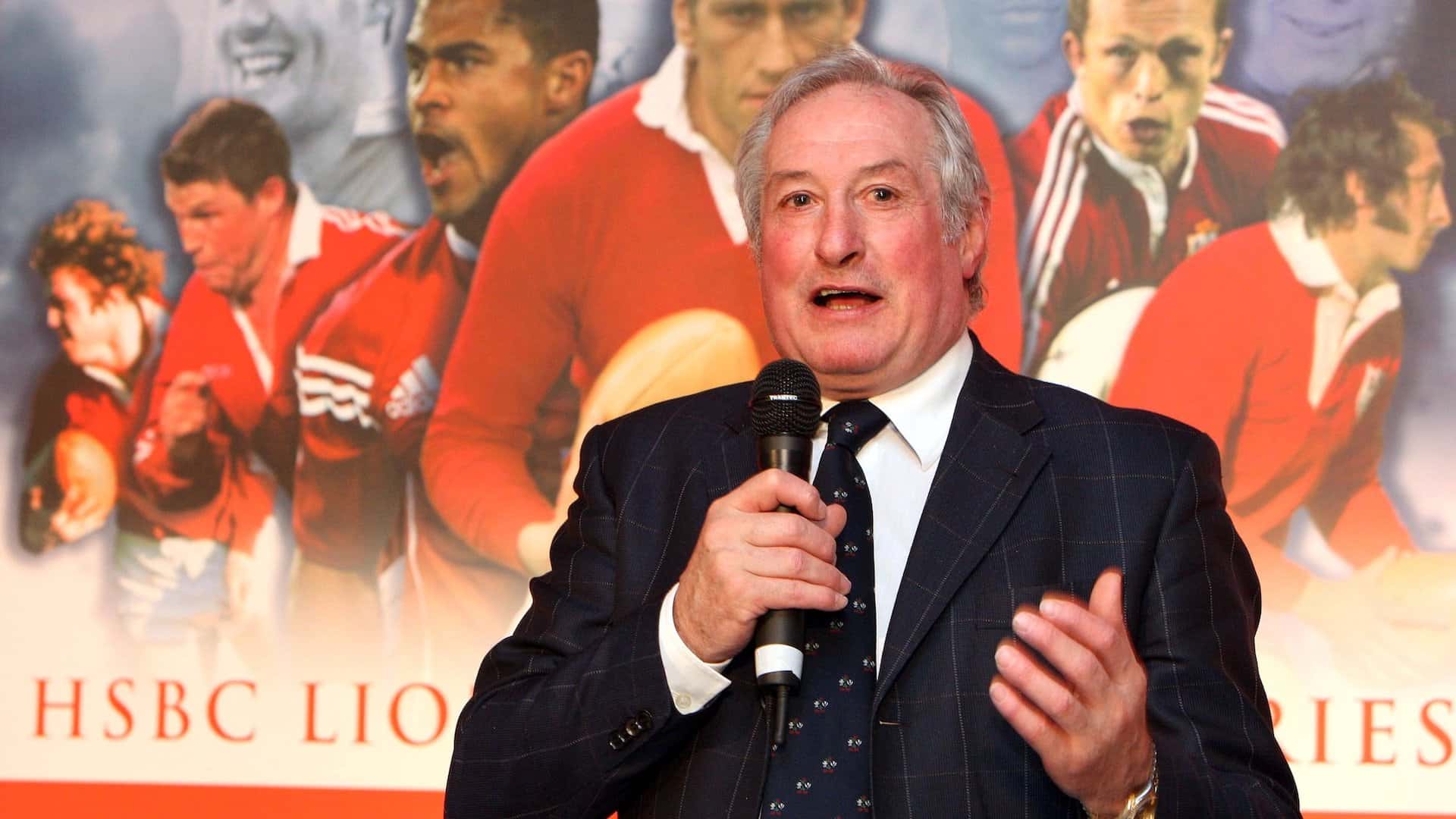 On that game against Canterbury in 1971…

“It was the most brutal game that we played in on that trip. About five minutes in, we had a scrum. The ball shot out at the back and I picked it up quickly and darted around the blindside and playing number eight for Canterbury that day was a guy called Alex ‘Grizz’ Wylie.

“He was a hard boy, but I got the better of him because the ball had shot out. I got tackled into touch and I remember as I was walking back feeling quite pleased with myself, he looked at me and said ‘hey scrum-half, you do that again and I’ll break your neck’, so I just turned around to him and said ‘p**s off’!

“Anyway, about three minutes in, I had another chance and I wish I listened to him. He tried to decapitate me and almost did.”

“I knew the hard grounds would suit him out there, but my word, he was just devastating. He was quite sensational and really showed what he was capable of. He was a huge contributory factor in our success.

“He was virtually unplayable on that tour, with the way he was beating people and setting up great tries. It was such a natural movement with him that guys couldn’t read him, they couldn’t do anything with him. He could make anybody look a chimp. He wasn’t trying to make a monkey out of you, but it was just his skill factor. 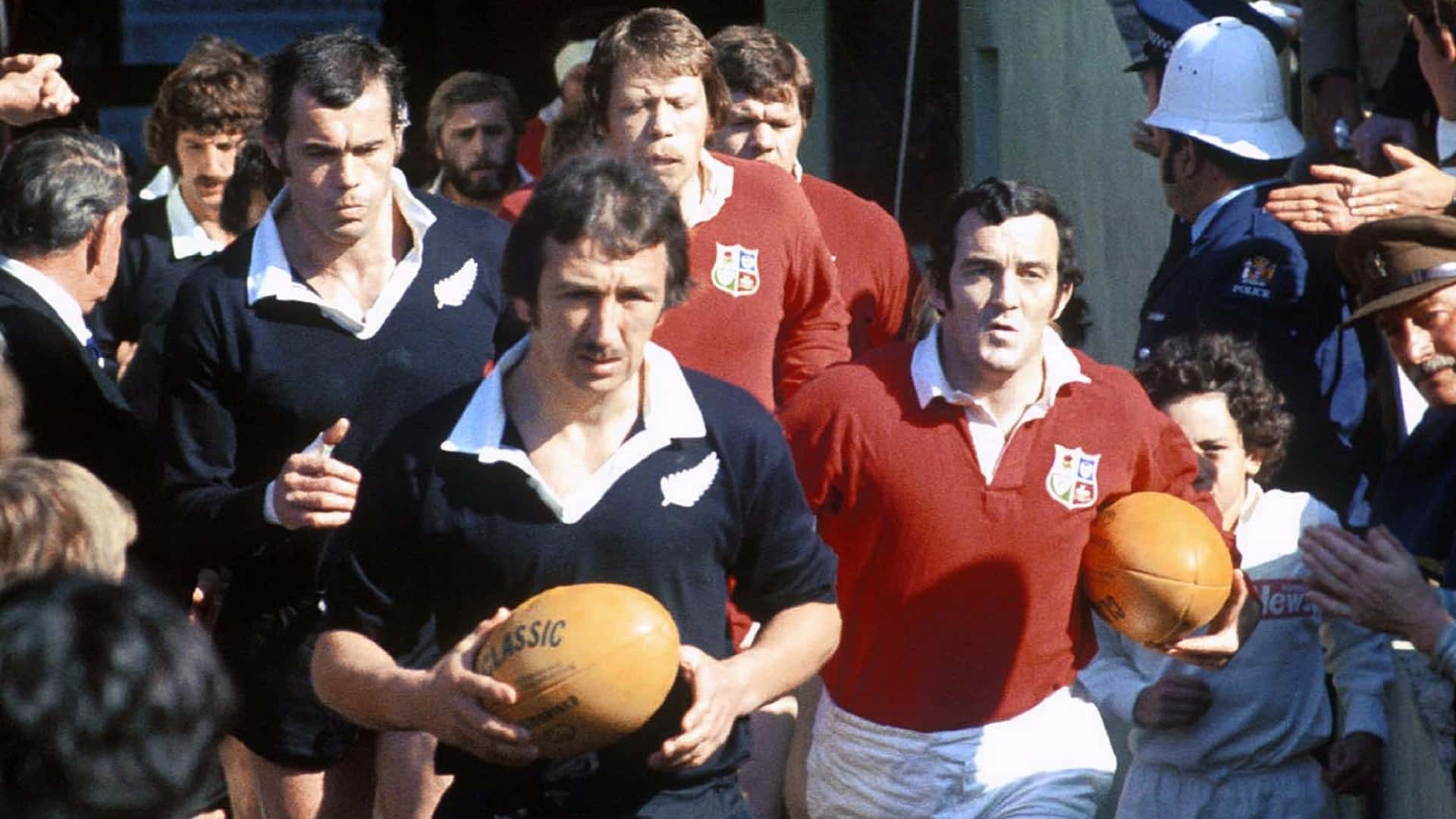 “Even though people knew by and large he was capable of doing it, they couldn’t do anything about the damn thing! We were fortunate to have some great success and it was just a privilege to play with him. I have got such fond memories of our time together.

“He had his accolades and deservedly so because he was a fantastic player, but he was also a fantastic person. If we were on tour, I would spend quite a bit of time with him.

“The Test team would share bedrooms, so I would see him on a regular basis, not only just in training. He had a wicked sense of humour. He was lovely. He was so generous in many ways, with his time and what he said. I loved being in his company. He was a great player, a great man and such a good friend.”