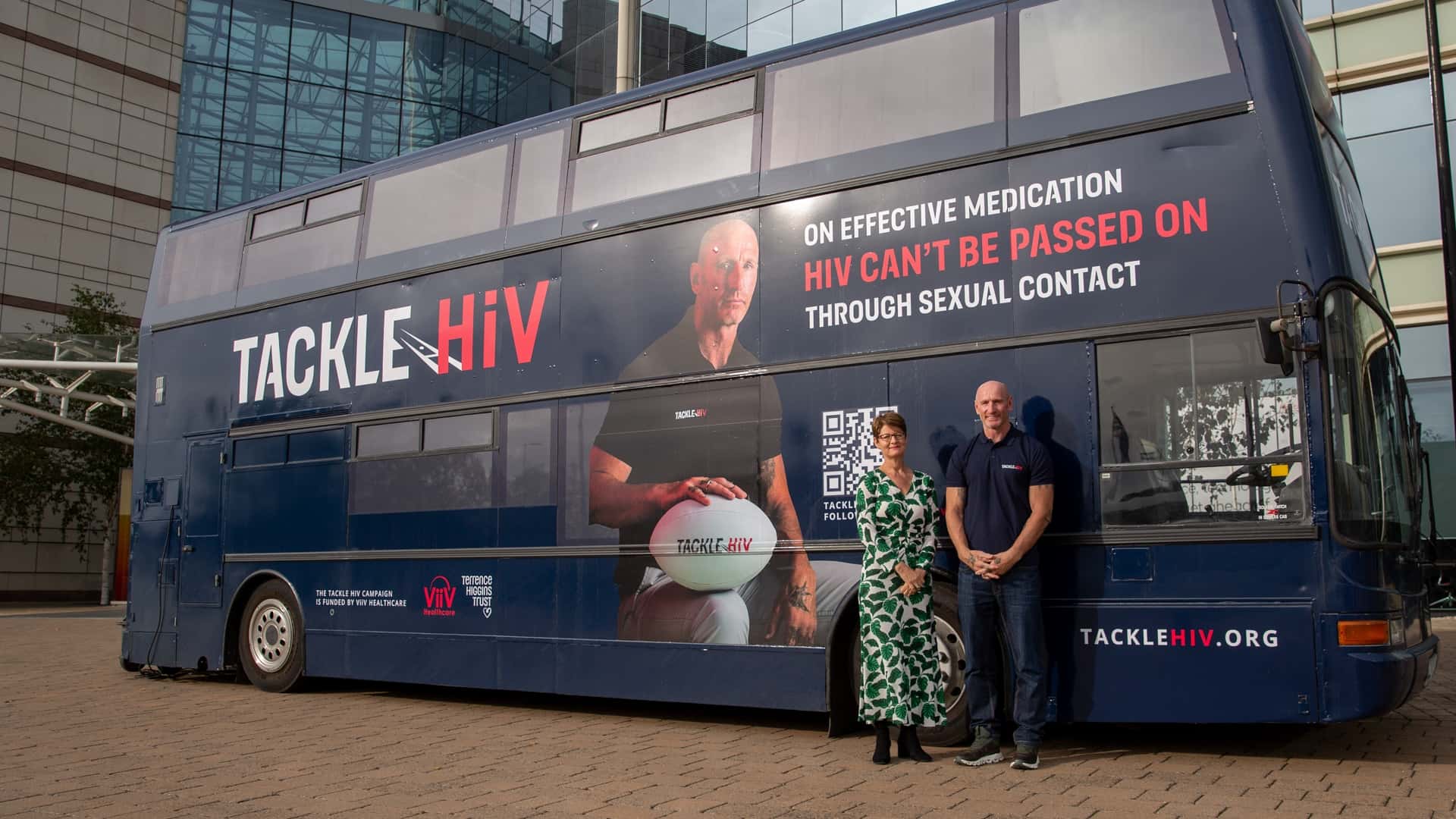 Gareth Thomas is urging the battle against HIV stigma to intensify as public perceptions of the virus continue to lag behind scientific and medical advances.

Recently back from New York where he gave an inspirational TED talk on stigma, the Welsh rugby legend – British & Irish Lion #747 – and the Tackle HIV team from ViiV Healthcare and The Terrence Higgins Trust have embarked on a nationwide Tackle HIV Myth Bus Tour, visiting several cities to continue the educational campaign.

The tour provides a visual and inspirational rally point to address HIV education and stigma and promote HIV testing, with science and medicine coming so far but public attitudes, understanding and stigma still lingering behind.

After a nationwide tour stretching from Scotland, through Wales and to the south of England through the month of October, the Tackle HIV Myth Bus Tour reached its trailblazing conclusion in London last week, culminating at Harlequins’ Premiership clash against London Irish at the Twickenham Stoop.

Thank you so much to everyone who has come down to visit 👏@ViiVHC pic.twitter.com/ymGdKy9f8b

And speaking alongside Deborah Waterhouse, ViiV Healthcare CEO, Thomas insists he is determined to keep the fight against misconceptions alive.

“You realise what you’re doing, what you’re fighting against is the difference between life and death for so many people.

“Fighting stigma is just as important as the scientific advances. A lot of people don’t understand that the science and medicine has meant that HIV is not a death sentence anymore, and that you can live a happy and healthy life.”

Waterhouse added: “Over the last 40 years, we’ve seen this incredible scientific progress from when the first HIV cases were diagnosed and discovered, to where we are today.

“If you were diagnosed with HIV in 1988, your life expectancy was about 18 months, and we now find ourselves where we are today where you can be on effective treatment, your virus fully suppressed and your life expectancy is exactly the same as anyone who is not living with HIV.

“That has been an incredible journey to be part of, but on the other side, the stigma journey has been nowhere near as successful.

“That is now holding us back as the stigma that surrounds HIV means that people are scared, they’re misinformed, they don’t get tested, they don’t know their status.

“Because people don’t know their status they’re not diagnosed, and they’re diagnosed late, and therefore their outcomes from a health perspective are much worse.

Amazing chatting to so many rugby fans about HIV.

Thanks to @harlequins for letting us share the facts🙏@ViiVHC pic.twitter.com/Vlum2t5qaa

“Our aim is that no one globally living with HIV is left behind, but we’re also here to end the epidemic. We cannot do that without tackling stigma and so this is where our partnership with Gareth becomes extremely powerful.”

Thomas and ViiV started the campaign to address the challenges with the support of Prince Harry and Sir Elton John – including many more from across the sport and celebrity world.

The 100-cap Wales international is undertaking challenges such as Celebrity SAS, Ironman, and half marathons to show that living with HIV is not a barrier to anything and to challenge and break down stigma.

Thomas  said: “Some of the language used, some of people’s opinions, you wouldn’t believe that that is the case, so it’s really important that we address the stigma to get the people to understand the facts around science and medicine.

“Sometimes as soon as you introduce science and medicine, maybe to a conversation in a pub, restaurant, or school, it can be very frightful or difficult for people to understand.
“The minute you talk about and address stigma, people start to understand, learn and realise.”

Waterhouse added: “We can do so much in the space of science, but if we don’t tackle stigma we will never end this epidemic.”

Tackle HIV, a campaign led by Gareth Thomas in partnership with ViiV Healthcare and the Terrence Higgins Trust, aims to tackle the stigma and misunderstanding around HIV. Visit www.tacklehiv.org and follow @tacklehiv