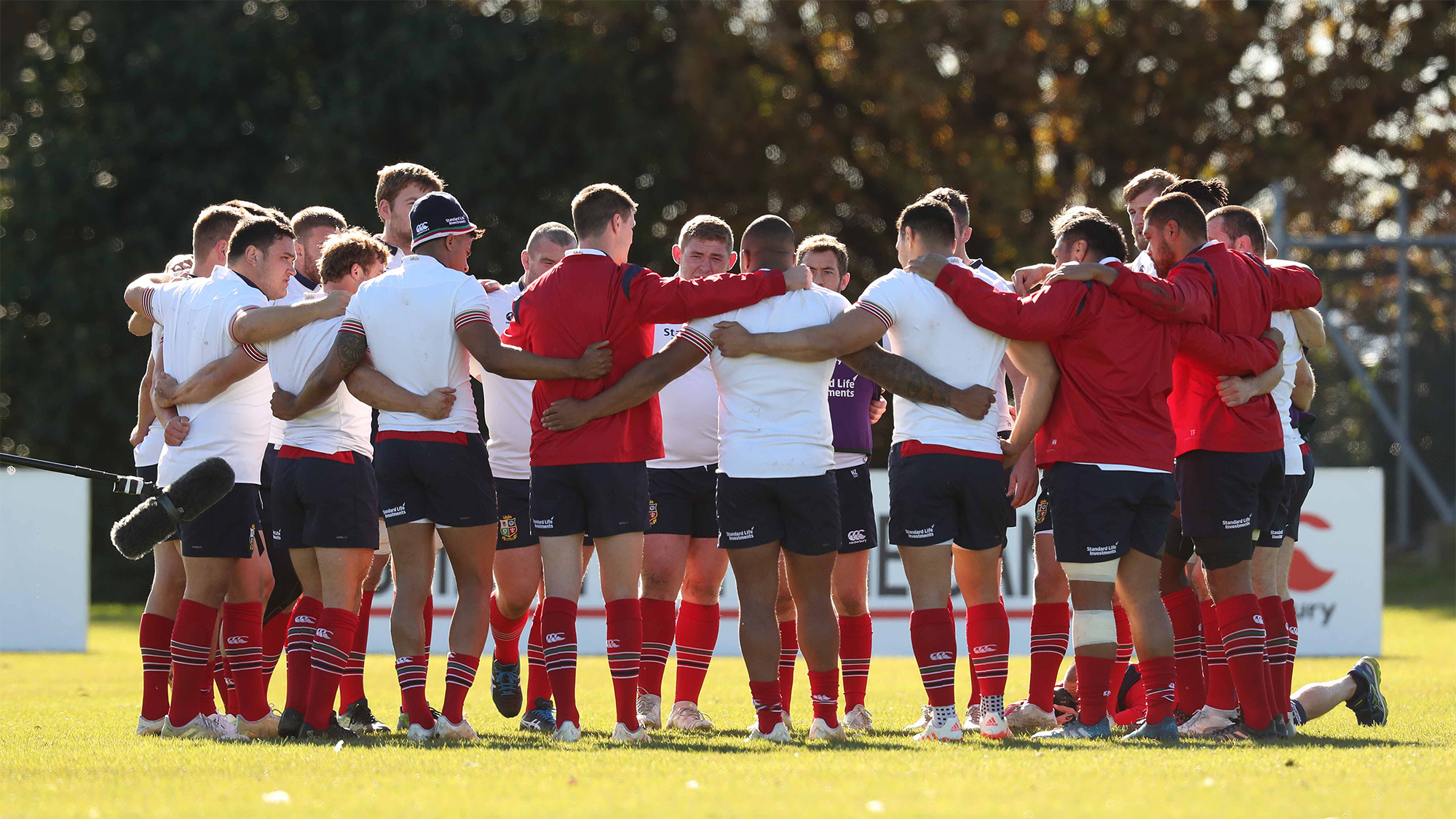 The fifth match often pits them against the Maori and Warren Gatland’s side – on the back of defeat to the Highlanders in Dunedin on Tuesday – are itching to bounce back.

The Lions lost this fixture 12 years ago in an instant-classic in Hamilton, and Gatland has picked what the Head Coach himself admits is something closest to his strongest side for the encounter.

Peter O’Mahony skippers the side from the back row – alongside Taulupe Faletau and Sean O’Brien after their impressive showing against the Crusaders last weekend – while Tour captain Sam Warburton takes a place on the bench.

There is a real Saracens flavour to the rest of the pack, Mako Vunipola and Jamie George in the front row with Maro Itoje and George Kruis the locks – Ireland’s Tadhg Furlong completes the tight five.

SQUAD UPDATE: Owen Farrell ruled out of #MABvBIL due to injury. Dan Biggar comes in on the bench.

In the backline Ireland’s Conor Murray and Jonathan Sexton are the half-back pairing, with Ben Te’o and Jonathan Davies paired in midfield again as the latter looks to get more minutes under his belt.

The back three sees Leigh Halfpenny join compatriot George North and England’s Anthony Watson while the replacements will look to add impact off the bench.

Owen Farrell was a late withdrawal with a quad strain meaning Dan Biggar covers fly half, with Greig Laidlaw and Elliot Daly providing the rest of the backline cover.

The replacements front row consists of Ken Owens, Jack McGrath and Kyle Sinckler with Iain Henderson and Warburton covering the rest of the pack.

O’Mahony on his Lions captaincy bow:

“It’s a huge honour, obviously. To be picked for the Lions at all is a massive honour.

“To get the nod from Warren this weekend is hugely special, not just me but for all the clubs, people and family who have put effort into me.

“We want to win but first and foremost, we need a performance.

“Whatever comes after that is what comes.  We need to be stepping up and guys to stick your hands up.”

Lions head coach Warren Gatland on turning to the Munsterman against the Maori All Blacks:

“Peter is a proven captain with Munster, who never takes a backward step, and we believe that those leadership qualities will serve us well on Saturday against a quality and determined Maori All Blacks team.

“We were obviously disappointed with the loss against the Highlanders and realise that we need to improve in several areas, including our discipline, but we feel that, overall, we are building well towards the Test matches.”

Maori All Blacks head coach Colin Cooper on the honour of facing the Lions:

“It’s been great to be here in Rotorua and feel all the support. It’s really lifted the team and brought them together as a unit.”

The Maori All Blacks are a historic team in New Zealand, that date back to 1888 when they were then called the New Zealand Natives, and were the first to wear the famous black jersey.

The squad beat the USA Eagles and Harlequins in 2016, either side of a 27-14 defeat to Munster, but in eight encounters with the Lions, the Maori have only won once, in 2005.

Here is your #MaoriAllBlacks 23 to take on @lionsofficial this Saturday in Rotorua!

Head coach Colin Cooper has named a strong team for Saturday’s meeting, including three members of Steve Hansen’s All Blacks squad in Tawera Kerr-Barlow and the Ioane brothers – Rieko and Akira.

Ash Dixon captains the side from hooker as part of a pack which includes Elliot Dixon, Liam Messam and Akira Ioane.

Bryn Hall and Rob Thompson will make their Maori debuts if they come off the bench and keep an eye out for All Black Damian McKenzie – most often a full back for his Super Rugby side the Chiefs – but at fly half on Saturday for the Maori.

George North starts his second game on Tour against the Maori All Blacks and he has an opponent with quite some pedigree up against him.

Nehe Milner-Skudder scored a try in the 2015 Rugby World Cup final as the All Blacks became the first back-to-back world champions.

But since that famous day at Twickenham the Hurricanes flyer has had a tough time with injury – missing most of the last two years with a combination of shoulder, hamstring and foot problems.

But the 26-year-old is back now and keen to prove himself after missing out on the All Blacks squad for the Lions Test series.

North meanwhile, one of the heroes of the historic 2013 Lions Tour, got 80 minutes under his belt against the Crusaders and will want to get another full game in his legs with the Test series approaching.

The Maori All Blacks have faced the Lions eight times in their history – stretching all the way back to 1888 – and have only won once, the last time they met back in 2005.

The Lions starting XV includes eight players who appeared in the final Test of the 2013 Tour as the tourists claimed an historic series win over the Wallabies.

Jaco Peyper will be the man in the middle on Saturday in Rotorua, the South African taking charge of his first game on Tour in preparation for the first Test against the All Blacks where he will also be holding the whistle.

His assistants will be Jerome Garces and Romain Poite – the other two referees for the Tests against the All Blacks – and the TMO is Australia’s Ian Smith.

After taking on the Highlanders in Dunedin last time out, the Lions return to New Zealand’s North Island – it’s certainly a case of out of the frying pan and into the fire.

Nicknamed ‘The Hangi Pit’ in reference to a traditional Maori cooking technique that makes use of fire-heated stones in an underground oven, the tourists can expect a red-hot atmosphere when they go toe-to-toe with the Maori All Blacks at Rotorua International Stadium.

A capacity crowd is expected this weekend but the Lions are no strangers to Rotorua, having defeated the Bay of Plenty on the same soil in 2005.

The stadium, which also hosted the Lions’ official welcome the last time they visited New Zealand 12 years ago, hosted four matches at the 2011 Rugby World Cup and has also been the venue for four rugby league Test matches.

Every game of the Tour will be shown on Sky Sports 1 at 8:35AM BST (7:35PM local time) in New Zealand and live on Radio on Talk Sport.

HOW TO GET INVOLVED?

Lions power to victory over the Maori All Blacks 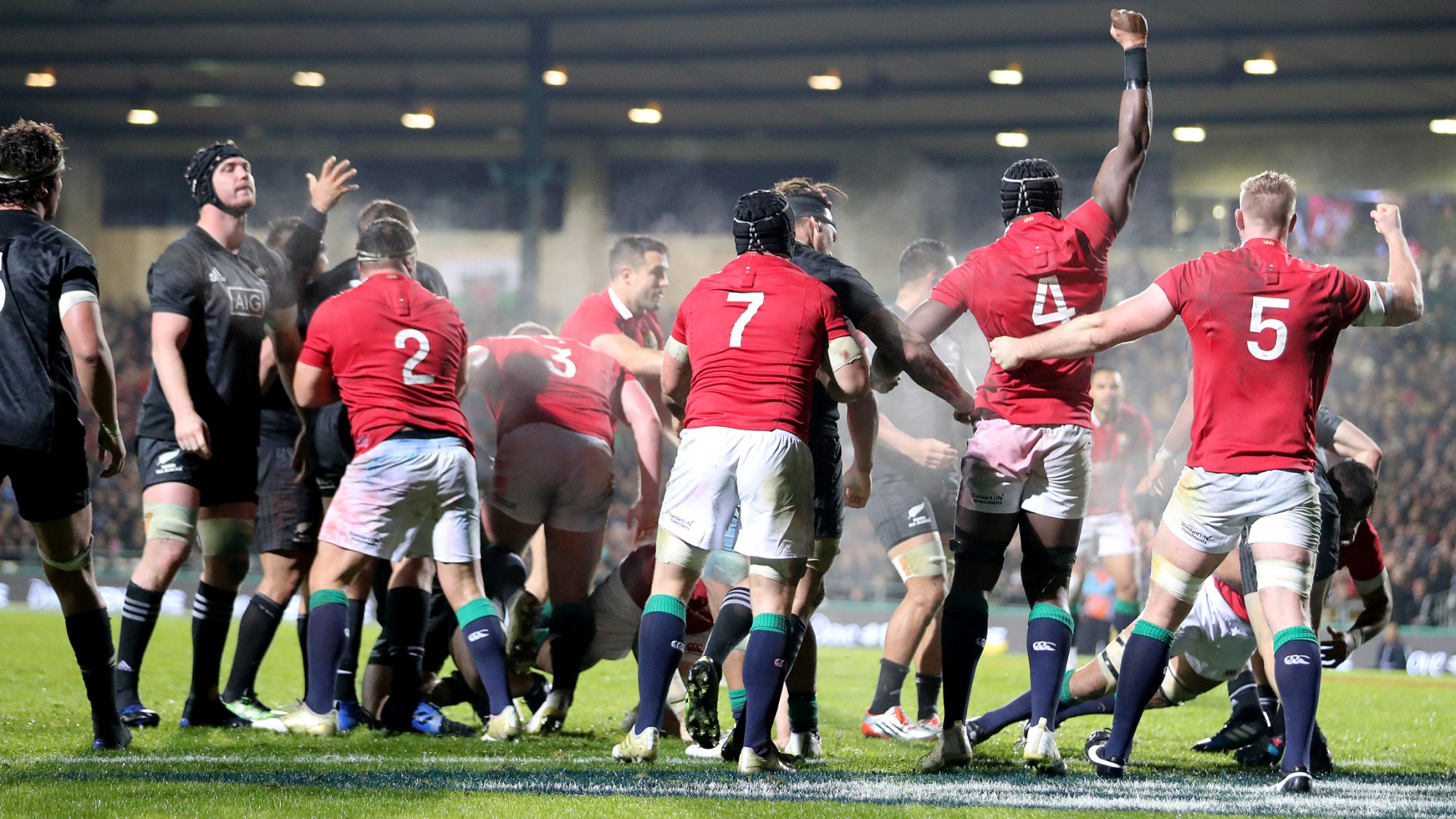 Four first-half penalties from Leigh Halfpenny – who finished the game with 20 points – meant the Lions were 12-10 in front at the break, Liam Messam’s breakaway try and a Damian McKenzie penalty in response for the Maori.

But after the break – when Tawera Kerr-Barlow saw yellow – the Lions scrum earned a penalty try before Maro Itoje burrowed over soon after.

The final quarter saw the Lions turn the screw, their driving maul continuing to prosper while Ben Te’o and Sean O’Brien both went close to a third try.

And Halfpenny remained perfect from the tee to seal the win and lay down a marker ahead of the Test series with the All Blacks that begins next weekend.

The Lions have never lost in Rotorua and in the stadium known locally as the Hangi Pit – after the traditional Maori cooking technique – it was the tourists who started red-hot.

Jonathan Sexton stood flat, threatening the gain-line and putting runners into holes at every opportunity as the Lions built the phases in the Maori 22. And when Messam compounded a James Lowe error by refusing to roll away, Halfpenny opened the scoring with a penalty.

The Maori had barely touched the ball in the first five minutes as Conor Murray picked up where he left off against the Crusaders with pinpoint box kicking.

All Black Rieko Ioane knocked on soon after and the Maori went offside allowing Halfpenny to double the lead.

But all that hard work was undone in the 12th minute as the Maori struck, Nehe Milner-Skudder chipped through and when George North and Halfpenny failed to deal with the greasy ball, Messam was on hand to hack through and dive on the ball for the game’s first try.

McKenzie added the extras to put the hosts in front but the Lions were fizzing with ball in hand, and when the ball was released left on halfway Jonathan Davies went carving through up to the line. The try was not forthcoming as the Maori went offside but Halfpenny again took the points on offer for a 9-7 lead.

Itoje and O’Brien were having some real joy at slowing ball in the first half for the Lions but when the former gave away a penalty from the re-start, McKenzie immediately put the Maori back in front.

North then made up for his earlier error with a fine scramble in defence while Sexton – whose kicking from hand also caught the eye in a bright first half – nearly released Davies soon after.

And after a Mako Vunipola turnover at the breakdown, the Lions went to the corner and won another penalty that Halfpenny slotted to restore the tourists’ lead at 12-10.

Despite the wet conditions, the Maori were looking to spread the ball at every opportunity with quickly-taken lineouts a regular occurrence. But a long-range penalty from McKenzie leaked wide and when Itoje won a pressure-relieving penalty the Lions went in ahead at the break.

The rain was coming down heavily now but Halfpenny remained unruffled and he slotted his fifth penalty of the night soon after the restart to open a five-point lead, and prompt a warning from referee Jaco Peyper to the Maori for persistent infringement.

Lowe then spilled a Sexton bomb and when Murray and Halfpenny worked the short side from the scrum, the full back was hit high with a no arms tackle by Kerr-Barlow and the All Black scrum half was shown a yellow card.

The game was not yet 50 minutes old and the Lions had a numerical advantage that they thought they had profited from straight away – Te’o battering at the line before Jamie George burrowed and went close.

The TMO could not find conclusive evidence that ball was over the line but in the end the deserved try did come as the scrum marched inexorably towards the line to earn a penalty try.

A brilliant occasion in Rotorua. A huge thanks to the Maori All Blacks for a great match.#MABvBIL#LionsNZ2017 pic.twitter.com/9Fo2oOXOp8

With the new World Rugby laws now in effect, no conversion was needed for the seven-point score and the Lions were 22-10 in front.

The Maori were still down to 14, and when a Davies kick through forced another five-metre scrum, the Lions front eight pushed it close before Itoje did the rest.

Halfpenny continued his perfect run from the tee with the extras and the Lions were 19 points to the good before the hour-mark.

Kerr-Barlow then returned from his sin-bin while the Lions emptied their bench to try and turn the screw – Tour captain Sam Warburton one of the men introduced into the fray.

O’Brien – now switched to the blindside – almost went through soon after and when the Maori were again penalised Halfpenny made it seven from seven from the tee for a 32-10 lead.

Te’o was the next to storm through but the chance was lost and the Lions had to settle for a 22-point margin of victory – their biggest-ever win over the Maori.