Another warm up win 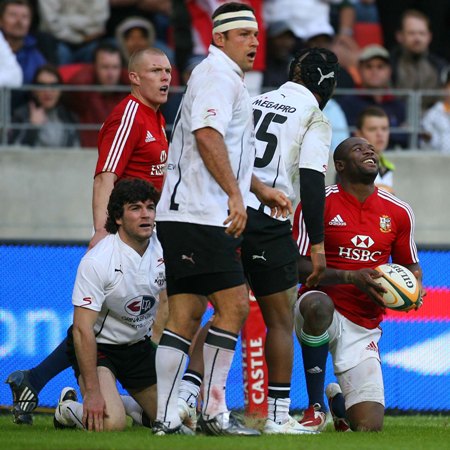 The 2009 Lions will enter the Test series against the Springboks on the back of six successive victories.

Ian McGeechan’s men were made to work hard for their 20-8 triumph over the Southern Kings in Port Elizabeth but the result sees the Lions travel to Durban with plenty of momentum.

A second-half try from Ugo Monye, together with a penalty try and 10 points from the boot of Ronan O’Gara, secured victory for the tourists, for whom James Hook and Euan Murray left the field with injuries.

Hook was taken off as a precaution following a heavy knock, while Murray limped off with a strain to his right ankle. Both players had been looking to press their claims for Test selection and it remains to be seen whether they will have made enough of an impression during their limited time on the pitch.

The Harlequins wing out-muscled opposite man Matt Turner to win the race to the loose ball to claim his fourth score of the tour.

It initially appeared as though the 26-year-old may have knocked on as he attempted to pounce under severe pressure from Bristol and England Sevens wing Turner but, after plenty of deliberation, the Lions were awarded their first try of the match.

The first half had ended just three points apiece after O’Gara and former Leicester fly-half Jaco van der Westhuyzen had traded penalties but it was the hosts who enjoyed the better of the opening exchanges.

Alan Solomons’ side are desperate to win the race to be named as the additional team in next season’s newly expanded Super 15 and the Eastern Cape franchise did their chances no harm with a hugely physical and committed performance at the Nelson Mandela Bay Stadium.

The Kings continually put the Lions under pressure at the breakdown and created try-scoring opportunities of their own, especially during a first 40 minutes in which they would have been disappointed not to have established some sort of lead.

The Lions produced a far better second-half display, however, with their 68th-minute penalty try just reward for their dominance in the scrum. Under the tutelage of former Lions prop Graham Rowntree, the Lions have been particularly impressive in the set piece throughout the tour and, despite the early loss of Murray, today was no exception.

Trailing by just 10 points with 12 minutes remaining the Southern Kings were still very much in the game. The Lions’ 100-per-cent winning record was on the line but skipper Donncha O’Callaghan’s decision to opt for successive scrums having been awarded a close-range penalty put paid to the Kings’ chances of an historic upset.

O’Callaghan explained afterwards that the front five were in confident mood at that crucial period in the game and that the choice of a scrum rather than a lineout or straightforward kick at goal was an easy one to make. The Munsterman signalled for the scrummage and the Lions pack turned the screw.

O’Gara’s routine conversion from directly underneath the uprights stretched the advantage to 17 points and, although the Kings hit back with a try from South African Sevens star Mpho Mbiyozo, the Lions had done enough to leave with yet another hard-fought win.

Britain and Ireland’s elite can now finally focus fully on this weekend’s first Test against the world champions. After two-and-a-half weeks of warm-up fixtures the business end of the tour is finally upon them. Six victories from six attempts makes pleasant reading but seven from seven would really make the whole of South Africa sit up and take notice.