Two of the potential stars of the 2013 Lions tour shouldn't be starting for Australia according to a legendary Wallaby coach. [more] 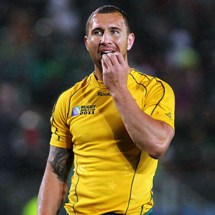 Two of the potential stars of the 2013 Lions tour shouldn’t be starting for Australia according to a legendary Wallaby coach.

Star outside-half Quade Cooper and new skipper James Horwill are both expected to play a major role when Britain and Ireland’s elite arrive Down Under in two years time.

Cooper has been mesmerizing audiences with his attacking genius since becoming a household name on the 2009 tour of Europe, while Horwill has just been promoted to the national captaincy after leading the Reds to Super 15 glory.

But Bob Dwyer, the Wallabies’ World Cup winning coach from 1991, says he would drop the pair for Saturday’s final group game against Russia and a likely quarter-final with South Africa.

"I have not been impressed with James Horwill; he gives much the same as Dan Vickerman, but not as well," Dwyer wrote in his column for the Green and Gold website.

"Will Genia as captain …I actually saw some leadership on Friday night," continued the former Leicester boss in relation to Genia’s promotion for the win over the United States.

"Berrick Barnes for Quade Cooper. Cooper needs to get his head right – dare I say again.

"Barnes looks our best kicker, both for goal and out-of-hand. We don't need the all-or-nothing plays, all of the time."

Australia went into the World Cup on the back of a first Tri Nations crown in a decade and with pundits predicting big things at the global gathering in New Zealand.

But a shock defeat to Ireland has left the Wallabies likely to have to beat both the Springboks and All Blacks if they are to reach the final.

And while Dwyer would have simply preferred to see the likes of Cooper and Horwill perform consistently well in the pool stages he doesn’t believe it’s too late to make wholesale changes ahead of the knockout rounds.

"The best starting XV has looked pretty settled for some weeks now, but a decline in the most recent form of some players, and some very positive signs from others returning from injury, have provided plenty of options," added Dywer.

"Some of them look decidedly better options than the status quo of the Tri Nations championship line-up.

"It will be a brave move, for sure, but I would rather go down fighting than just surrender."