The countdown to the 2009 British & Irish Lions tour to South Africa has reached the one year mark and the excitement levels are rising. [more] 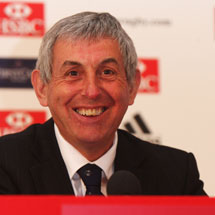 The countdown to the 2009 British & Irish Lions tour to South Africa has reached the one year mark and the excitement levels are rising.

So are the levels of preparation. Having had their first formal meeting this week, tour manager Gerald Davies, head coach Ian McGeechan and team manager Louise Ramsay will head to South Africa on Tuesday, 3 June to check out hotels and training facilities.

“With only a year to go to the first game against the Highveld XV in Rustenburg it would be fair to say that the countdown to the 2009 tour has begun in earnest,” admitted Davies.

“Our trip to South Africa will not only allow us to pick hotels, training venues and firm up our travel plans, but it will also allow us to take in the two Tests between the Springboks and Wales.

“Seeing the world champions in action in their own backyard will give us a good indication of what has happened to them since they won the Webb Ellis Trophy in Paris in November 2007.

“A lot has happened since then and they have a new coach in Peter de Villiers and some new players. I’m sure Ian will get a lot out of seeing the two Tests and in talking to the Welsh coaches and players.

“By the time we return we hope to have a firm idea of not only the facilities we will be using on the tour, but also of the major stepping stones we need to take before we depart.

“Ian is hoping to appoint his back room coaching team prior to the November internationals and to get a good look at the Springboks when they come to the UK to meet Wales, England and Scotland. We will be finalising the dates for selection and ensuring that no stone is unturned in our preparations.

“It is going to be a busy year in the build up to the tour and there is a vast amount of work to be completed before we get on the plane. After that, I’m sure the seven weeks will fly by.”

Davies and McGeechan will return to South Africa later in the year to run the rule over the Springboks when they get into action in the Tri Nations and the tour manager feels it is essential to gather as much intelligence as possible on the opposition ahead of next year.

“We have got to know the strength of the opposition. We have to analyse where they are coming from,” said Davies.

“Then we have to match their strengths and weaknesses. We have got to measure our players to face the opposition.

“The fact we are going into the back yard of the world champions makes next year’s tour something to cherish and look forward to. By then our players will have had a full season of operating under the new experimental laws.

“None of us knows clearly how these new laws are going to work out. What we hope is that by the end of this year we all know where we stand on them.”