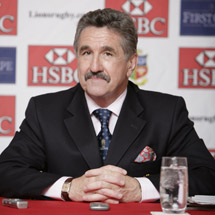 The twinkle-toed ex-London Welsh, Cardiff and Wales wing made his mark on two Lions tours in 1968 and 1971, playing in five Tests.
And now that he is back in the fold, as Tour Manager of next year’s trip to the home of the reigning world champions, Davies is keen to ensure the 10 match tour is a major success.
“The Lions is a terrific brand, something that should survive forever in my view. Not only for us as the four countries that represent the Lions, but especially for the southern hemisphere teams,” Davies told South African reporters in Cape Town.
“If it were ever to go, I think it would be a sad, sad day. If the Lions did not exist it would leave such a vacuum in the game.
“There is terrific enthusiasm here already in South Africa and, believe me, the expectation of the number of people that will follow us from the UK will be substantial. The value of the Lions is essential for the future of the game.”
Davies made a try-scoring debut for the Lions on the 1968 tour to South Africa – in a 20-12 win over Western Transvaal in Potchefstroom. Tom Kiernan’s tour party lost the Test series 3-0, with one game drawn, with Davies playing in the third Test.
He went on to help the 1971 Lions become the only British & Irish squad to win a series in New Zealand, scoring three tries in the four Tests.
“One journalist described the Lions as the ‘one last, great rugby adventure’. I think that is the way we must look on the Lions and the value that it brings to rugby,” said Davies.
“That novelty is one of the most important values of the Lions. I’m sure if you asked the New Zealanders, South Africans and Australians they would like to travel and tour a little more than they do currently, they would like something added to the Test matches they already play.
“A Lions tour brings additional value in the interest generated from the public. The fans want it, the players want it and I believe that everyone attached to rugby wants the Lions to continue, especially in the professional age
“When I was appointed manager I thought it was important to go around and meet the media representatives in the four Home Countries and, without question they believed in the Lions.
“But as far as Ian McGeechan, our Head Coach, and myself are concerned, we are simply looking at the Lions in 2009. A number of people have looked back to 2005 to see what we will do in 2009, but there is no point looking back.
“ I think it is much better to look at the present and see what we are likely to achieve in 12 months time.”