Marcelo Loffreda, the man who coached Argentina to a draw with the 2005 British & Irish Lions and third place in the 2007 Rugby World Cup, has lost his job at Leicester Tigers. [more] 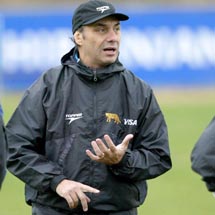 Marcelo Loffreda, the man who coached Argentina to a draw with the 2005 British & Irish Lions and third place in the 2007 Rugby World Cup, has lost his job at Leicester Tigers.

Having joined the Guinness Premiership club after his country’s success at the World Cup in France he led them to the Premiership final at Twickenham Stadium last weekend, when London Wasps triumphed 26-16.
That was the second final the Tigers had lost at Twickenham during the season. They were beaten by the Ospreys in the final of the EDF Energy Cup in April.
Announcing the departure of Loffreda, Leicester Tigers chairman Peter Tom said:
"The Board of Leicester Tigers has come to this decision after conducting its review of the playing season and in assessing what we believe is required to achieve the club’s aspirations for the future.
"Marcelo arrived at Leicester Tigers in 2007 after leading Argentina to third place in the Rugby World Cup, and our decision has been taken with a degree of sadness.
"But we have taken this course of action in the best interests of the club and we felt that this had to be done now to allow everyone to prepare fully to meet the challenges of the new season.
"On behalf of the club, the Board would like to wish Marcelo and his family well for the future.
"No decision has been made on a new appointment, but we expect to have a new rugby structure in place ready for the players’ return to pre-season training."
Loffreda took over as head coach from Pat Howard, who returned to his native Australia having won the EDF Energy Cup, Guinness Premiership and reached the Heineken Cup final.