Dowd sounds warning to All Blacks

The All Blacks have been warned that Rob Andrew's new-look England side is capable of plunging New Zealand rugby deeper into its post-World Cup depression. [more] 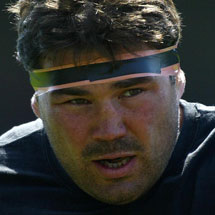 The All Blacks have been warned that Rob Andrew’s new-look England side is capable of plunging New Zealand rugby deeper into its post-World Cup depression.

England are missing a host of front-line players on tour, with the likes of Danny Cipriani, Paul Sackey and Phil Vickery injured, and could field as few as three survivors from the World Cup final in Saturday’s first Test in Auckland.

But former New Zealand prop and Wasps forwards coach Craig Dowd has urged All Blacks boss Graham Henry not to under-estimate the power and potential of the travelling England team.

"Craig emailed me during the week and said: ‘Don’t take the English lightly – they’ve got a very good side coming’. They’ve got a big forward pack and a lot of experience," Henry revealed.

Dowd has a clear insight into the strength of the English game after seven years at Wasps as a player then coach.

His chief concern for the All Blacks is whether they have anyone to cope with the destructive power of Andrew Sheridan now Carl Hayman is plying his trade for Newcastle.

"The All Blacks need to be very cautious of the England scrum. Andy Sheridan is the key, an absolute colossus and each time we have played them Carl Hayman has done really well against him.

"Now he is not there I would be really worried if I was [scrum coach] Mike Cron.

"Matt Stevens gets better all the time as the other prop.

"England will try and strike from set piece – that will be their game."

Dowd returned to New Zealand last season to take up a post with North Harbour and is particularly excited to see two of his former charges in action this weekend.

James Haskell and Tom Rees could both find themselves in the starting line-up when Andrew confirms his selection in the early hours of Tuesday morning.

"Usually these Tests are so one-sided but I think these will be real Test matches against England. They will kick for the corners and rely on their forwards but it won’t be their old, tired driving play, it will be far more dynamic," Dowd told the New Zealand Herald.

"England will be much more vigorous up front than Ireland were at the weekend."