McGeechan to take 35 to SA

British & Irish Lions head coach Ian McGeechan will announce his coaching team in the Autumn and will announce an initial squad for the 2009 tour to South Africa of up to 65 players. [more] 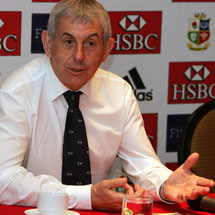 British & Irish Lions head coach Ian McGeechan will announce his coaching team in the Autumn and will announce an initial squad for the 2009 tour to South Africa of up to 65 players.

But by the time the Lions head to South Africa for their 10 match tour, that number will have been reduced to around 35 as McGeechan prepares to beat the reigning world champions in their own back yard once again.
The Scottish coach bashed the Boks as a player on the all conquering 1974 Lions tour, playing in the 3-0 Test series victory, and then coached the 1997 tourists to a 2-1 series triumph.
With Tour Manager Gerald Davies, who made his Lions debut in South Africa in 1968, McGeechan has just completed a 12 day recce of the country, taking in the two Tests between the Springboks and Wales.
“I thought the Springboks were quite impressive. They have certainly got some got some talent there,” McGeechan told a press conference in Johannesburg.
“It’s obvious they have got that mix between experience and young players coming through and I was impressed with the coaching team. I know Dick Muir, he’s been to London Wasps and looked at how we do things, and I also spoke to the rest of the South African coaching team.
“I also got involved with the Welsh coaching team, so from my point of view it’s been a brilliant trip.”
Asked about the composition of his coaching team, and when he will name his squad, McGeechan once again reiterated he will be making changes from the policy of the last Lions tour to New Zealand in 2005.
“I will probably name the captain with the squad, but at this early stage I don’t know who it is going to be,” said McGeechan.
“We want to look at an initial squad of somewhere in the realm of 60-65 players. We will probably have that in our minds come January or February.
“That number would then come down to about 35. It will be a smaller squad than in 2005, with one coaching team.
“Coaches and players will be working together quite closely. We are looking to announce the coaching team in the Autumn, once we have got the programmes, the structures and the way that we want to operate in place.
“By then we will be happy with all the roles and responsibilities. It will then obviously be about talking to personnel and I’d hope that we are in a good position by late Autumn.”
As well as taking a smaller squad to South Africa compared to 2005, McGeechan also stated there would be no repeat of the warm-up Test that Brian O’Driscoll’s team went through against Argentina three years ago.
“There won’t be a warm-up Test this time. I think that it is far more important that we get together as a group for a week in the UK and a week in South Africa before the first game,” added McGeechan.
“Looking back, it probably meant that we were trying to do things too quickly. I just think that coming together is very important for us and that those first two weeks are crucial.”