Ian McGeechan has hailed former British & Irish Lions coach Syd Millar as one of the most influential people in his remarkable career. [more] 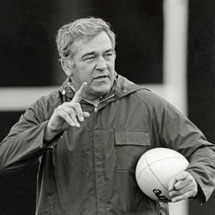 Ian McGeechan has hailed former British & Irish Lions coach Syd Millar as one of the most influential people in his remarkable career.

Millar, who recently stood down as chairman of the International Rugby Board, was coach of the victorious 1974 Lions tour in South Africa on which McGeechan played.

A quarter of a century later and McGeechan will lead the 2009 Lions into battle against the Springboks but cites that memorable 1974 tour as the time he "grew up".

"Syd Millar was the coach of the Lions back then and the way he handled that group of players over four months was fantastic," McGeechan told BBC Radio Five Live at Wimbledon.

"He made you feel important and took time with you. I felt I really grew up as a person on that  tour because of the way I was handled. As a coach, I try to do the same with my players."

McGeechan recently returned from a ten-day fact-finding trip to South Africa but heads out again in August to watch the Springboks in action during this year’s Tri Nations. And that will give him a chance to see opposite number Peter de Villiers’ men in action under the new experimental law variations.

On his return, the Lions boss will sit down with tour manager Gerald Davies to complete his coaching team before continuing his role as director of rugby at Guinness Premiership champions London Wasps.

"The Lions have allowed me to have the year to prepare and Wasps have been great as well," said McGeechan.
"I can get rid of the non-rugby things to other people at Wasps and concentrate on the playing side with the coaches."

He added: "Some of the new laws are good. The five-metre rule from the scrum gives you a little bit more space and not being able to take the ball back into your own 22 to kick directly into touch is good.

"But I’m not so sure about some of the others. For instance, being able to pull down a maul and not being forced to have the same numbers in a lineout could take away the essence of power in the game and might make it more messy."