Australia assistant coach Michael Foley has warned his forwards to expect a "tricky assignment" when the Wallabies host France in Sydney on Saturday. [more] 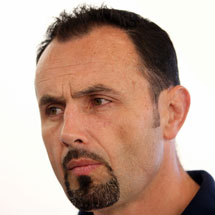 Australia assistant coach Michael Foley has warned his forwards to expect a "tricky assignment" when the Wallabies host France in Sydney on Saturday.

Speaking at the team’s Sydney base on Wednesday, set-piece specialist Foley predicted the under-manned tourists would look to utilise their scrum as an attacking weapon and challenge the Australian forwards in open play.

"The front row they’ve picked are probably most renowned for their scrummaging. Both locks are big physical guys and certainly with the captain (Lionel Nallet) in the tight-five is suggests the approach that they’ll have to the game," Foley said of coach Marc Lievremont’s side.

"And (it’s) a very dynamic back row they’ve put together there.

"(Imanol) Harinordoquy’s a guy that a lot of people will have seen but (number eight Louis) Picamoles and (Fulgence) Ouedraogo are very good athletes that played during the Six Nations that made a big difference to their running game."

Asked why the French front row will prove a seriously difficult opponent, Foley said simply: "They’re French – so scrummaging for them is a way of life.

"(Hooker Sebastien) Bruno and (Lionel) Faure, the loosehead, have had combination at (English club) Sale and they’ll have (Sebastien) Chabal packing behind them who’s also with them at the same club.

"And at tighthead they’ve picked a guy (Benoit Lecouls) who I think is a specialist scrummager."

Pressed for specifics, Foley singled out his side’s ability to control the breakdown area.

"We felt our mauling was down in the first Test (18-12 win over Ireland on June 14) and again there’s probably some clarity around that in (the lead-up to) this second Test.

"But there isn’t one area that we don’t want to improve on.

"We were good in patches but there were other times where we felt those inconsistencies left the opposition with opportunities.

"And to be a side going forward that’s going to be number one in the world we need to be able to close those opportunities for the opposition down."