Exactly three years after claiming a First Test victory over the Lions in Christchurch, All Black centre Aaron Mauger has praised the travelling support that accompanied the tourists on their last overseas adventure back in 2005. [more] 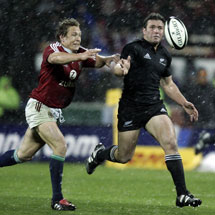 Exactly three years after claiming a First Test victory over the Lions in Christchurch, All Black centre Aaron Mauger has praised the travelling support that accompanied the tourists on their last overseas adventure back in 2005.

The former Canterbury Crusaders playmaker, now plying his trade in the Guinness Premiership with Leicester Tigers, believes nothing else can quite compare with the enthusiasm that accompanies a Lions tour.

"It was probably the best support for a touring team I’ve ever seen in New Zealand," said Mauger, who won 45 caps for his country. "It was amazing. The New Zealanders really enjoyed the support and they got along really well the Lions supporters. They displayed so much passion and that probably gave our crowd a bit of a lift as well in getting them more involved.

"It’s always a big thing to play against the Lions. They only tour every four years so it doesn’t happen very often. I was pretty lucky to get that opportunity. There’s a huge build up and they’ve got great support. The fact that it’s so well publicised and the amount of support they had made it even better. It had the whole of New Zealand buzzing."

Mauger played important roles in both the First and Second Tests and, although he missed the Third Test through injury, the 27-year-old views the series victory as one of the highlights of his career to date.

"It was a great feeling as it had been a big goal of ours that year. It was good timing for me and I realised how big it was once I was actually playing. The Lions don’t come along very often and we would quite happily have just taken a series win if we had been offered that at the beginning of the series. To beat them 3-0 was pretty good, although they probably didn’t play to their potential. I think they were a much better team than they displayed out on the field.

"I think we played pretty clinically in the First Test when it was cold and wet. We did the basics well and the forwards were pretty physical. The Second Test was probably the best we played during the series. They started really well and they were on top of us but we blew them away. For the last 50 or 60 minutes, we took control and dominated the game. I think Dan Carter had one of the best games an individual has ever had. As a team, it was a great performance and it was probably the most enjoyable game of the series."

Despite inflicting a series defeat on the Lions last time out, Mauger believes the tourists have a great chance of beating current World Champions South Africa when the two sides meet this time next year. Having been a regular member of the All Black squad for seven successive seasons, he has plenty of experience of facing the Springboks, while his move to Leicester has given him the chance to take a closer view at the best players British and Irish rugby have to offer.

"I’ve been pretty impressed with the quality of the top-line players over here. With a little bit of direction, and if they can pull it together a bit better than they did in New Zealand, they’ll be a lot more formidable. The guys who went on the last tour will have that experience behind them and they’ll know how to pull it together to make sure they’re successful. I think it will be a cracking series and it should be pretty even down there.

"I think the biggest thing for the Lions is to get a bit of continuity on tour and for the top team to play some games together. I think that was a bit of a weakness last time in that they didn’t really play their starting team together until the First Test. We won that quite well and that put them on the back foot for the next two. I think they’ll know that they need that consistency in order to perform.

"The good thing about South Africa is that rugby is their number one sport. It’s like New Zealand and Wales, the people are rugby mad and they really get behind their team. It’s a different place to play and the crowd can be hostile at times but I think they’ll embrace the Lions tour and the sheer magnitude of it."