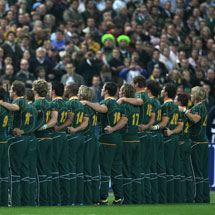 The 24-year-old was cited after Saturday’s 30-28 Tri-Nations victory against New Zealand at Carisbrook for coming into "contact with the eyes or eye area" of All Blacks flanker Adam Thomson in the 11th minute.

The ban will run up to and including August 3, meaning the hooker will miss next weekend’s Tri-Nations clash against Australia in Perth but will be available again for the match against Argentina in Johannesburg on August 9.

Garling accepted this and concluded that the contact was careless and not deliberate but added that "any action by a player in which fingers, a hand, or a knuckle comes into contact with the eye or eye area of a player is very serious".

The South Africans have not had much joy with their hookers on this trip. Captain John Smit was forced home early with a groin injury he suffered in a tackle by Brad Thorn in the opening minutes of their 19-8 loss to New Zealand in Wellington which resulted in a one-match ban for the All Blacks lock.

Schalk Brits was flown in as cover and came off the bench in Saturday’s historic win in Dunedin. He now seems set to start against the Australians at Subiaco Oval next weekend.