Bleddyn Williams was 'The Prince of Centres'. A Lions tourist in 1950, the Welshman was regarded as arguably the most-complete midfield player of his generation. [more] 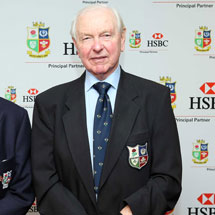 Bleddyn Williams was ‘The Prince of Centres’. A Lions tourist in 1950, the Welshman was regarded as arguably the most-complete midfield player of his generation.

Despite missing the first four games through injury, the Cardiff three-quarter played in 20 of the 29 fixtures on the near four-month tour of Australia and New Zealand. He scored 13 tries and set up countless others for his Lions team-mates on a tour that saw a comfortable defeat of the Wallabies after a agonising loss in an incredibly close Test series against the All Blacks.

By captaining the side in the absence of Karl Mullen during the third Test in New Zealand, Williams became the first Welshman to skipper the Lions since 1910. In total, he led the Lions in three Test matches, scoring a try against Australia in Brisbane in his final Test in charge.

A superb all-round player, Williams had a knack of creating space for others. As well perfecting the basic arts of the game, he possessed a impressive sidestep and a deceptive turn of speed.

Born in Taff’s Well but brought up in Penarth near Cardiff, Williams won a scholarship to attend Rydal School in Colwyn Bay from the age of 14-18.

He represented his country at Schools level in 1937 before making is Cardiff debut as a tennager. Having served in the RAF in the Second World War, Williams was a regular in the Victory Internationals of 1945 and 1946, later winning 22 full international caps for Wales over an eight-year period between 1947 and 1955.

On injury and selection in 1950

"It was the first tour since the War and a great honour to be selected in the first place. They hadn’t had a Lions side since 1930 so there was a lot of interest.

"I didn’t know I was going to go because I was injured. I never played in a game in 1950 – I missed all four internationals – so it was a great surprise.

"I had to prove my fitness before I went, though. I had to play for Cardiff against Bath on the day that Wales were playing at the Arms Park against France. I was only out of plaster the week before I played the game. Can you imagine what my muscles were like?!

"I just went through the motions but, thanks to Cliff Morgan, I scored a try in the last few minutes of the game. I think the media were fooled by that because they thought ‘Williams is fit’. There were five weeks aboard ship, though, so I did a lot of exercise and I was alright for the tour."

On training onboard ship

"We got to know each other on ship as we knew we were going to be away for a long time. There were only 72 of us aboard ship in total. There was lots of training on board  – we were exercising and we even had scrummaging on ship. We didn’t lose any balls overboard, though, as our passes were accurate!

On taking on the coaching responsibilities

"We didn’t have any coaches. Karl Mullen was the captain from Ireland. He looked after the forwards and Jack Matthews and I looked after the backs. We played the game off the cuff, it was as simple as that. We never had calls but most of the back division were Welsh."

On the tour itself

"I’ve still got vivid memories, even after all these years. It was a marvellous tour and a great side to play with. It had to be, though, as there were 14 Welshmen on tour!

"There was a Welsh society in New Zealand, as there was in Australia, so we had a great following.

"When I was over in New Zealand three years ago, I was told that the 1950 side would have given the 1971 team a good run for their money.

"We weren’t quite strong enough up front but we had a great back division and we played some lovely rugby. The idea was to entertain. It was instilled in us that we must play entertaining rugby and we were very successful at that."

On the Lions chances of success in 2009

"Having seen South Africa lose to Australia (in their penultimate Tri Nations game), I thought ‘we’ve got a hell of a good chance of beating them’, but when I saw them score 53 points the next week, I couldn’t believe my eyes!

"I saw the ’74 Lions in South Africa and with a bit of luck I might be going this time as well!"