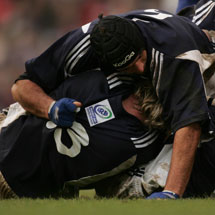 Huber takes the position of forwards coach under former All Black Tana Umaga after Crenca paid the price for a disappointing start to the season.

Having been promoted to the Top 14 earlier this year, Umaga’s men made more high-profile signings such as All Black back row Jerry Collins and rugby league star Sonny Bill Williams but they have struggled to make an impression either in the league or the European Challenge Cup.

Crenca, a former French international prop who was part of the 2003 World Cup campaign, was in his first coaching post having joined the club in 2006/07 from Agen.