Lions the ultimate for BOD

2005 Lions skipper Brian O'Driscoll has reiterated his belief that a Lions tour is the ultimate goal for any British and Irish player. [more] 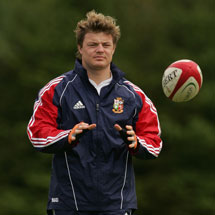 2005 Lions skipper Brian O’Driscoll has reiterated his belief that a Lions tour is the ultimate goal for any British and Irish player.

The 29-year-old has been in superb form over recent weeks and, although his thoughts are currently on performing well for Leinster and Ireland, next summer’s tour to South Africa is a big part of his plans.

"It’s the pinnacle because it’s so unique," says O’Driscoll, who has been confirmed as his country’s captain for the forthcoming autumn internationals.

"Each tour that you go on, you’re never going to play with those players again. You’re unlikely to be coached by that coach again in that environment and you get a chance to play against one of the three best teams in the world over a period of seven weeks.

"When you put all that together, it seems almost impossible (to win a series) but in your head, as a Lion, you know you can achieve it if you get it right."

O’Drsicoll currently has two tours under his belt but, with the Wallabies and All Blacks finishing victorious in 2001 and 2005 respectively, the centre is desperate to help the Lions return to winning ways.

"I’m not looking at it as unfinished business but I would really love to be part of a winning Lions tour.

"We should have won in Australia in 2001, and then the New Zealand tour for me was over before it started and we lost miserably.

"It isn’t about avenging the missed opportunities of the last tour, but I’d really love to be part of another Lions series."

If O’Driscoll is to help the Lions to their first series win since 1997, he knows he and his team-mates will have to be at their very best against reigning World Champions South Africa.

"South Africa is a tough place to go on tour. The South Africans breed on confidence and they’ll have that in abundance coming off the back of a World Cup win. They’ll certainly want to put right the fact that they felt they let the country down in ’97 by losing to the Lions having won the World Cup in 1995.

"It’s a tough place to go for any international team but for a team that’s been put together in a short period of time, it’s an even bigger ask.

"Playing South Africa at any time is tough but it is do-able, and they can be beaten. There’s a lot of very special players in England, Ireland, Scotland and Wales. If you can put them together and get them clicking, it could be a very special spectacle."

The Lions’ unique team spirit could be crucial in 2009

For Ian McGeechan’s men to leave South Africa in nine months time with a series win behind them, O’Driscoll believes the Lions’ famous team spirit will have to come the fore once more, just at it did in 1997.

"There’s always a good craic within the squads. In the first couple of weeks, guys are probably feeling each other out a little bit more, not knowing what you can and can’t get away with. By the end of it, you develop that squad mentality. You’re very much together on everything.

"I’ve enjoyed some great laughs alongside the seriousness of playing the rugby. If the Lions can get the sort of bond they had in 1997 and the balance right they can win a Test series for the first time since beating South Africa all those years ago."