Lions legend Gavin Hastings believes the 2009 tour to South could prove to be something, very, very special. [more] 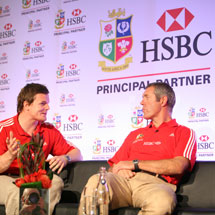 Lions legend Gavin Hastings believes the 2009 tour to South could prove to be something, very, very special.

The Former Scotland full back, who featured in six successive Lions Tests in 1989 and 1993, believes head coach Ian McGeechan and tour manager Gerald Davies will bring the Lions back to their best.

"There’s probably no one more experienced in Lions tradition and history than Ian McGeechan, and I think the fact that Gerald Davies is there as well is extremely important," said Hastings, who captained the Lions on their tour to New Zealand 15 years ago.

"For me, this Lions tour is almost a bit of a watershed because I think there will be an awful lot of players that will not have been on a Lions tour before that will be there as a result of their performances.

"I think in the past, selectors may have been a wee bit guilty of picking players who have performed either in a World Cup two years before or on past Lions tours four years behind. I think that the selection this time around will be based purely on the way that the players are playing this season and that’s very, very important. They will be taking the players who are on form and have shown a great deal of promise."

Since retiring as a player with 61 caps and 667 points for his country to his name, Hastings has followed the last three Lions tours with great interest. If the Lions are to continue to build on their hard-built reputation in world rugby, the former Watsonians, Cambridge University and London Scottish star believes they must learn from the frustrations of three years ago and regain the form that saw them win in South Africa in 1997 and come within a whisker of defeating the Wallabies four years later.

"I do think that we took a bit of a dent in New Zealand three years ago. That was a massively disappointing tour for the supporters. For the Lions to have a future, they must remain competitive and, I’m afraid, three years ago, we weren’t competitive on the field.

"That is the most important requirement for the Lions to be secure of a place in the future. I don’t think they need to win the Test series but they have to be competitive. This is the next tour and the next opportunity for the Lions to address those mistakes.

"There’s no doubt that the last time we visited South Africa in ’97, it was a really crucial time for the Lions. The fact that we won that Test series and that four years later in Australia was such a brilliant series really hammered home the importance of the Lions in world rugby and the significance in which it is placed.

"With Ian McGeechan at the helm and Gerald Davies as manager, there is a huge amount of experience and integrity right at the top there. Every single effort will be made to ensure that the team are competitive and I just have a feeling that the lessons have been learned from the last tour and will be put to good use."