James Hook is rated only '50-50' for Wales' clash with the All Blacks this Saturday. [more] 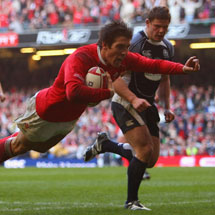 James Hook is rated only ’50-50′ for Wales’ clash with the All Blacks this Saturday.

Fly-half Hook, 23, limped out of the win over Canada with a tendon injury to his right knee.

Wales coach Warren Gatland is sweating on Hook winning his fitness race before naming his side today to face New Zealand in Cardiff.

Stephen Jones is in line to wear the coveted No10 jersey and if Hook fails to recover, Gatland will select 19-year-old rookie Dan Biggar on the bench.

"James went to see a specialist over the weekend and is having more treatment,” said Wales and Lions defence coach Shaun Edwards.

"He’s such a quality player that we will give him as long as possible. He’s up for selection but we will make a late decision."

Hook is Wales’ only major injury concern as they aim to end 55 years of hurt with a victory at the Millennium Stadium.

The All Blacks are chasing their own piece of history and remain on course for a Grand Slam on their UK tour following successive wins over Scotland and Ireland and Edwards admits Graham Henry’s star-studded side will give the dragons their toughest test yet.

"The All Blacks are the most respected team in world rugby and it will be the ultimate challenge for us. They totally dominated a strong Irish side so we will have to be at our best in all aspects of the game.

"You only have to look at the last couple of World Cups to prove that. We will be positive and give everything to give a good account of ourselves."