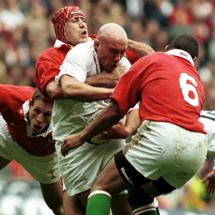 The ex-Gloucester, Sale and Wasps hooker toured with the Lions eight years ago but injury ended his tour before he had a chance to push for a Test place in Australia.

Greening was forced to retire from the game in October 2005 after failing to recover from a foot injury he sustained in Wasps’ Premiership Final win over Leicester Tigers.

The 33-year-old, who won 24 caps for England in the 15-a-side version of the sport, first ventured into coaching in 2007 with the England Sevens squad when he acted as assistant coach to Mike Friday.

With Greening assisting the club on a part-time basis since February, London Welsh finished sixth in England’s National League One this season and are now looking to push on in next season’s renamed Championship and British & Irish Cup.

"I’m really excited to be part of a club that is growing and is hugely ambitious for the future," said Greening.

"London Welsh is a great club at which to develop my coaching skills in a day-to-day hands-on environment – something I did not have much opportunity to do with England Sevens.

"It’s also a club where I can bring my own style, along with lessons and styles I have been fortunate to learn from working with great players and coaches, such as Clive Woodward, Warren Gatland, Sean Edwards, John Mitchell and Mike Friday.

"I feel my experiences in my rugby career, both good and bad, can not only help towards building a strong club but can also develop individuals within London Welsh to become successful."

Greening’s appointment on a full-time basis has been welcomed by London Welsh head coach Danny Wilson, who sees the former international as an important part in the club’s future progress.

"Phil is a tremendous acquisition to the coaching staff at London Welsh and I’m delighted that he’ll be with us going forward," explained Wilson.

"In the short time he’s been at the club, Phil’s impressed me immensely with his eye for detail and his enthusiasm and the players have really taken to him.

"Not only will Phil bring a defensive edge to our game, which was missing last season, but his eye for detail will undoubtedly assist in developing individual players’ skill levels both in attack and defence.

"Phil also brings incredibly high standards from a career spent at the top end of the professional game – standards that we aspire to at London Welsh having only turned professional a year ago."