One of the Springbok match winners from this summer's Lions tour could soon be playing his club rugby in the northern hemisphere. [more] 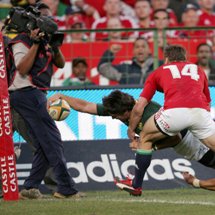 One of the Springbok match winners from this summer’s Lions tour could soon be playing his club rugby in the northern hemisphere.

Fourie turned the tide of the 2009 series against the Lions when he crossed for a crucial try with just minutes remaining of the second Test in Pretoria late last month.

The 26-year-old supplied a world-class finish to bring the Springboks back into the match at Loftus Versfeld, paving the way for Morne Steyn to break the Lions’ hearts with a last-minute penalty that would clinch the three-match series.

Fourie currently plays his domestic rugby with Super 14 outfit the Golden Lions, with whom he is under contract until October of 2010, but Clermont Auvergne’s vice-president Jacques Pineau has claimed a deal to bring the player to Europe is almost complete.

"There is an agreement between the club, the player and his agents. I think his arrival is going to happen," Pineau said in French publication L’Equipe.