The international career of former Lions tourist Simon Taylor appears to be in doubt after the 29-year-old was not named in Scotland's 44-man pre-season training camp. [more] 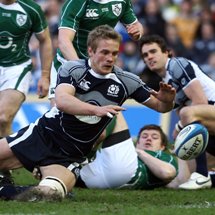 The international career of former Lions tourist Simon Taylor appears to be in doubt after the 29-year-old was not named in Scotland’s 44-man pre-season training camp.

Taylor, who toured with the Lions in 2001 and was again selected four years later, asked to be excused from the three-day get together later this month.

The Stade Francais back row made the request to new head coach Andy Robinson, with the former Lions forwards boss giving Taylor permission to miss the St Andrew’s camp, although no reason has been for his absence.

“I have spoken at length with Simon and he has requested not to be involved with Scotland at this stage,” said Robinson, who is preparing for Scotland’s games against Fiji, Australia and Argentina this autumn.

“I am agreeing to his request but the door remains open for Simon to be involved with Scotland at a later stage and I will be monitoring his form over the next few months.”

Taylor, who turns 30 on the first day of the camp on August 17, currently has 66 Scotland caps to his name having made his debut back in 2000.

He was a surprise selection for his first Lions tour eight years ago but only played in the opening match against Western Australia before injury ended his tour prematurely.

In 2005, Taylor’s Lions experience was even more short lived, with injury again ruling him out, this time before he had played even a single fixture in New Zealand.