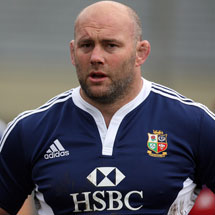 The Munster prop, who was called up as a late replacement on the summer tour of South Africa having also travelled to New Zealand with the Lions four years ago, has been suspended for six weeks.

Hayes was found guilty of stamping on Leinster front rower Cian Healy during a Magners League match in Dublin last Friday and will be unavailable for selection until November 15 – the day after Ireland take on the Wallabies.

The 35-year-old, who is currently the leading appearance maker in the Heineken Cup will also miss the first two rounds of that competition as Munster look to regain the crown they lost to Leinster at Murrayfield in May.

Hayes has already played 87 times in Europe’s premier club competition but he will miss the games at Northampton and at home to Treviso and will now have to wait until the December 11 clash with Perpignan to add to that tally.

"Having studied the match footage and heard all available evidence, the three-man IRFU disciplinary panel confirmed that the offence constituted a high-end entry level in terms of sanctions,” said an IRFU statement.

"Having also considered all mitigating factors, the panel imposed a six-week suspension from the date of the offence on Saturday, October 3 up to and including Saturday, November 14."

Hayes, who can boast an otherwise impeccable disciplinary record since making his Munster debut back in 1998, admitted his frustration at the sentence in a statement issued by Munster team manager Shaun Payne.

"John regrets the incident happened at all,” said Payne.

"He has a long and unblemished professional rugby career spanning 12 seasons and would not be regarded by anybody, including opponents, as being a dirty player.

"He is very disappointed with the sanction, given that the committee accepted the action wasn’t intentional yet decided the entry point for the offence to be at the higher range, the nine weeks reduced to six in mitigation."

Former Heineken Cup winners Munster will wait until they have received the written copy of the decision before deciding whether or not to appeal against Hayes’ ban.

If no appeal is lodged, or if any appeal is unsuccessful, Hayes will not be allowed to play again until six days before his country’s clash with South Africa on November 21.