Lion to stay a Scarlet

Lions hooker Matthew Rees has committed his future to the Scarlets. [more] 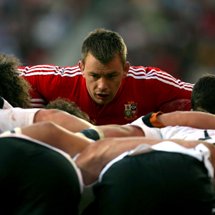 Lions hooker Matthew Rees has committed his future to the Scarlets.

The 29-year-old has signed a new three-year contract that will see remain at the Parc y Scarlets until 2013.

Rees impressed for the Lions on the summer tour of South Africa, playing eight times in 10 fixtures.

The former Celtic Warriors and Pontypridd No2 featured in all three Tests against the Springboks, starting both the second and third internationals.

Although Rees is currently sidelined with a groin injury that required surgery, the Scarlets expect him to play a big role in the future of the region.

"To retain the services, experience and strength of key senior players such as our Lions hooker Matthew Rees and prop Iestyn Thomas is crucial in our bid to strengthen and develop our Scarlets squad going forward," said head coach Nigel Davies, after Thomas, Daniel Evans and Ken Owens joined Rees in signing contract extensions.

"This is great news for our region as we secure four top players for the next two to three years. This group of signings exemplifies what the Scarlets are all about this season and going forward – a strong mix of emerging talent and experience.

"With a big emphasis on bringing through talented Scarlets youth, it is important that our younger players have experienced senior players to learn from at crucial times."

Rees, who currently has 34 Welsh caps to his name, joined the Scarlets in 2004 after the Celtic Warriors were disbanded.

He has made 121 appearances for the region and is one of the most respected players in Davies’ squad.