One of the Springbok stars who downed the Lions last summer believes spending time out of the Munster starting XV has helped him turn his northern-hemisphere career around. [more] 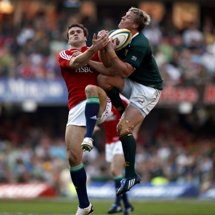 One of the Springbok stars who downed the Lions last summer believes spending time out of the Munster starting XV has helped him turn his northern-hemisphere career around.

Springbok centre Jean de Villiers was brought in to provide a new cutting edge to Munster’s midfield but, after a shaky start, he was dropped to the bench.

Five tries in 11 games, two as a replacement, may not sound too bad a return, but six defeats in 14 games, including a 30-0 hammering against arch-rivals Leinster in the Magners League, is not the kind of return Munster coach Tony McGahan was hoping for.

Nevertheless, Munster and De Villiers stand on the threshold of reaching the quarter-finals of the Heineken Cup for the 11th year in a row and are only five points adrift of top spot in their defence of the Magners League crown.

“I struggled at the beginning when I arrived in Ireland and my form has been patchy,” admitted de Villiers, who started both the first and second Test victories for South Africa against the Lions.

“It didn’t help that the team weren’t playing well as a unit to begin with.

“But being dropped to the bench for the two games against Perpignan helped me to turn the corner.

“Now it’s all about digging team and working hard, but I feel much closer now to where I was as a player before I arrived than when I first started.”

As well as having to contend with a change in playing styles and on-field culture, De Villiers, who joined Munster from his native South Africa late last year, has also had to adapt to his new surroundings away from rugby circles.

And with the current cold snap taking Ireland by storm, that task has been a tough one for the 55-times capped World Cup winner.

“It has been a difficult December and start to January, especially with the weather. My body is used to starting pre-season training at this time of year,” added de Villiers.

“I got a picture message from one of my former team mates at the Stormers the other day showing the temperature gauge in his car. It was 39 degrees, which is in stark contrast to the weather we’ve been having in Limerick.

“But all the other players have been fantastic and have really helped me. From a Munster point of view, the Heineken Cup didn’t start off in the way we wanted it to with defeat at Northampton.

“But the back-to-back victories over Perpignan have put us back in charge of our Pool. Our victory in Perpignan was the best game we have played this season.

“It was a really strong collective performance – a great team effort. It was a performance that revealed a lot to me about the Munster culture.”

At the heart of that famous culture lie the Munster fans. Revered around the globe for the fanaticism and commitment, the Red Army have made an instant impression of de Villiers.

“Paul O’Connell is a great leader, but he gets so much support from the other guys around him as well. Then there is Munster’s 16th man, their incredible fans.

“They really are full-on supporters and they back their team in bad times as well as good.

“The atmosphere they help to create at games, especially at Thomond Park is fantastic. I’ve been used to playing in front of big crowds with the Stormers in the Super 14, but when there are 30-40,000 in a 50,000 stadium there are still big spaces.

“In the smaller grounds in Europe you really feel the crowd – they become part of the vibe. The Munster fans really are our 16th player and its great being on the pitch when they are backing you.”