Former Lion Danny Grewcock has been banned for seven weeks for stamping. [more] 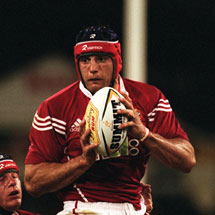 Former Lion Danny Grewcock has been banned for seven weeks for stamping.

The 2001 and 2005 tourist was sent off after 32 minutes of Bath’s Heineken Cup defeat to Ulster last weekend.

Grewcock was dismissed for stamping on the arm of 2009 Lion Stephen Ferris during Bath’s final European game of the season at The Rec.

The offence was deemed to be "mid-range in the level of seriousness" and Grewcock was subsequently suspended until March 13 this year.

Grewcock has faced a number of suspensions during his extended professional career, including a ban for striking Saracens scrum-half Neil de Kock last November.

Having played in all three Tests for the Lions against Australia nine years ago, Grewcock’s 2005 tour of New Zealand was cut short when he was sent home for allegedly biting the ear of All Black hooker Keven Mealamu during the first international in Christchurch.