Shane sticks up for Lions pal 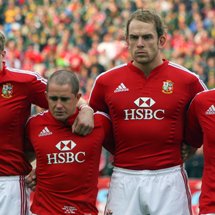 Lions wing Shane Williams insists the Wales squad will stand by Alun Wyn Jones after the second row was heavily criticized following his costly yellow card during defeat at Twickenham.

Jones has been named in the Wales side to face Scotland this weekend despite being made the scapegoat by many Welsh fans for the 30-17 reverse at the hands of England.

But Williams insists his fellow 2009 Lion has the full backing of the national team ahead of Saturday’s Round 2 encounter at the Millennium Stadium.

"I know there are a lot of unhappy Welshmen out there but no-one is more gutted than Alun,” said Williams, who has kept his own place in the Wales line up for the clash with Andy Robinson’s Scots.

"We’ve all seen the reaction to the game and what happened with Alun and I feel for him. It’s tough when fingers are pointed, especially given that he is one of the most committed people I’ve played with and gives 100 per cent every time.

"There were 14 other guys on the pitch who played for 80 minutes and could have won that game. Obviously the yellow card didn’t help matters because we were under the cosh and conceded 17 points.

“But Alun is one of the lads and not one of the players are going to blame him. We will all stick by him."