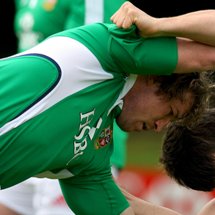 Munster hooker Jerry Flannery will appeal against his six-week suspension.

The Ireland international was banned until March 29 after being found guilty of kicking France wing Alexis Palisson during his country’s 33-10 defeat in Paris last Saturday.

Flannery, who had been due to tour with the 2009 Lions before injury intervened, pleaded guilty prior to being sentenced and acknowledged that the offence deserved a red card at the time.

The current length of the ban means Flannery will miss the remainder of Ireland’s defence of their Six Nations crown, as well as up to four Magners League games.

Flannery’s hearing will be held next week before an independent Six Nations appeal committee, with details of the personnel not yet announced.