One of the surprise inclusions in the 2005 Lions squad is returning home after a two-year spell in France. [more] 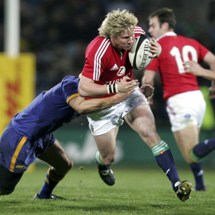 One of the surprise inclusions in the 2005 Lions squad is returning home after a two-year spell in France.

Former Leicester centre Ollie Smith left the East Midlands to join Montpellier in 2008 but he will be back in England next season after signing for Harlequins.

Smith was selected for the Lions having made just one start and four substitute appearances for his country.

He went on to feature in five games for Britain and Ireland’s elite, scoring two tries in the process.

He was the first player to score a try for the 2005 Lions when he crossed against Argentina in the 25-all draw at the Millennium Stadium.

Smith’s England career has stalled since his Lions adventure, with the 27-year-old unable to add to his five caps since returning from New Zealand.

He has openly admitted, however, that he hopes his move to Quins will put him back into the spotlight and reignite his international career in time for the 2011 World Cup.

“I will be joining Quins a year before the World Cup, and I am not afraid to say that one of the reasons I have returned to England is so I can push for a position in next year’s World Cup squad,” said Smith, who picked up Heineken Cup, Guinness Premiership and Anglo-Welsh honours during his time with Leicester.

“I believe Quins, with the players and coaching structure that they have in place, will allow me to achieve that aspiration.

“I am really looking forward to coming back to England and joining such a prestigious club, and one which has so much history.

“It boasts an exciting and young group of English players, some of whom I have been lucky enough to have played with during my time in the Saxons and the Churchill Cup.

“Quins is a team which is going in the right direction and I want to be a part of it.”