Lions captain Paul O'Connell has been included in Ireland's summer tour squad despite currently being sidelined through injury. [more] 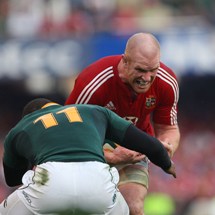 Lions captain Paul O’Connell has been included in Ireland’s summer tour squad despite currently being sidelined through injury.

O’Connell, who led the Lions in South Africa last year, hasn’t played since the Six Nations defeat to Scotland due to a persistent groin injury.

The Munster second row has missed a host of crucial Heineken Cup and Magners League games for his province and has been in and out of hospital but Ireland coach Declan Kidney is hopeful he will soon be available for selection.

O’Connell is joined in the 33-man squad by a further 12 Lions, plus two players who were due to tour South Africa this time last season before injury prevented them from doing so.

Kidney has named three uncapped players for next month’s tour Down Under that is preceded by a fixture against the Barbarians in Limerick.

Ulster’s Chris Henry and Dan Tuohy and Leinster’s Fergus McFadden have all won call ups but there is no place for 2009 Lions Stephen Ferris and Luke Fitzgerald or Munster’s Denis Leamy who miss out through a broken cheekbone and a serious knee injuries respectively.