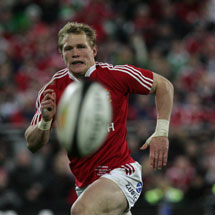 Former Lions tourist Josh Lewsey has been forced to abandon his attempt to climb Mount Everest.

The 2005 Test Lion retired from professional rugby at the end of last season, but instead of favouring a quiet life, Lewsey set about scaling the world’s tallest peak.

Lewsey began the climb with former Armed Forces colleague Major Keith Reesby, with the duo hoping to raise money for Help for Heroes and Combat Stress.

But the World Cup winner’s brave effort came to a disappointing end on Sunday after a failure with his breathing apparatus.
Lewsey had climbed 8,700 metres and was feeling confident that he would reach the peak before the malfunction left him fearing for his life.

The ex-Wasps star had his oxygen supply cut off and was left with no option but to descend.

"Josh got to 8,700m, feeling strong and confident he would make the top. At this point his breathing apparatus broke and was not giving him enough oxygen, it then froze meaning he had no access to oxygen," read a statement on the climb’s official website.

"He therefore had to rapidly descend to 8,200m without oxygen and was passing dead bodies on the way down, with real concern that he wasn’t going to make it.

"Josh wanted to head straight back up from 8,200m and attempt the summit again but the resources were not available to him. He has therefore descended back down to ABC.

"Josh is currently in the process of deciding whether to make another attempt."

Lewsey’s climbing partner, Reesby, continued climbing but it remains unclear whether he has reached the summit.

News
Previous story Lion out of Pumas Tests
Next story The Lions Down Under: 1966