Former Lions skipper Martin Johnson says his post-match comments to his players following England's first-Test defeat to Australia were the sternest of his time as national boss. [more] 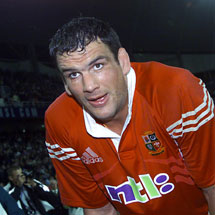 Former Lions skipper Martin Johnson says his post-match comments to his players following England’s first-Test defeat to Australia were the sternest of his time as national boss.

Johnson, who led the Lions against the Wallabies nine years ago before guiding England to World Cup gory on Australian soil two years later, was far from impressed with the manner of his team’s 27-17 reverse in Perth.

England came close to securing a shock at the Subiaco Oval thanks to a late comeback but, in truth, defeat was all they deserved.

Johnson’s men totally dominated the scrum and were awarded two penalty tries at the setpiece but Australia were a different class in their all-round play, crossing for three tries of their own and looking far more inventive in attack.

"I think that's as harsh as I've been with them," said Johnson, after England failed to build on a promising performance against France in the final game of the Six Nations.

"We said we should be angry with ourselves. If you give it a decent shot and get beaten [that is one thing] but when you add to it in the way we did it is disappointing.

"We make it too easy for the opposition. You have to be very good down here to win games and we didn't help ourselves."

England, who picked six Lions in their starting XV in Tim Payne, Simon Shaw, Tom Croft, Mark Cueto, Steve Thompson and Lewis Moody, found themselves 14-0 down at half-time against a Wallaby side brimming with confidence.

Johnson admitted that his side were second best, particularly in the early stages, and that big improvements will have to be made if they are to turn things around in next weekend’s encounter in Sydney.

"We started very poorly. We were more than a little off the pace, gave them a lot of chances and put ourselves in trouble," added Johnson.

"We had enough chances to put ourselves in the game but their composure on the ball was better.

"But if you concede three tries you are probably not going to win. The missed tackle count was not healthy.

"The scrum played a big factor in the game but not enough for us to win. We have got to be better. We can't expect to get two penalty tries every week.

"When we work through it next week we will have some very good teaching points.

"I can say 'this is why we tell you to do this and that'. Maybe in club rugby you get away with it but here you get exposed."