‘House of Pain’ comes to end of road

One of the most famous, and feared, international rugby venues in the world will host its last Test match this weekend when the All Blacks play Wales in Dunedin (Saturday, 19 June, .2010) [more] 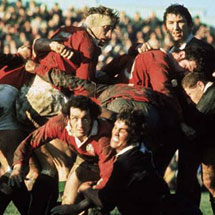 One of the most famous, and feared, international rugby venues in the world will host its last Test match this weekend when the All Blacks play Wales in Dunedin (Saturday, 19 June, .2010)

Carisbrook has become revered as the ‘House of Pain’ down the years after so many international teams fell there against either New Zealand or Otago. The British & Irish Lions played the first international at the ground on 6 June, 1908, and found themselves on the end of a hiding as they fell 32-5 to the All Blacks.

That completed a thoroughly miserable time in the south island for Boxer Harding’s Anglo-Welsh outfit as they had become Otago’s first international victims at the same venue a week earlier when they were beaten 9-6.

The stadium has been home to the Highlanders in the Super 14 and Otago in the Air New Zealand Cup. It is the former home of Otago cricket, which moved to the University Oval at Logan Park in the north of the city after the redevelopment in the early 2000s, and also of Otago United Football team in the New Zealand Football Championship, which moved to the lower-capacity Sunnyvale Park for the 2008–09 season.

It’s replacement will be the NZ$ 198m Forsyth Barr Stadium within the grounds of the University of Otago. This will be New Zealand’s first covered stadium and could become a future venue for matches against the Lions. It will having a capacity of 25,000, with the ability to add 5,000 extra seats for major occasions.

The Lions’ first Test victory at Carisbrook came in 1930 when they rocked the All Blacks to win by two tries to one. Their only other victory came in the first Test in 1971, which set up a 2-1 series triumph.

‘Mighty Mouse’ Ian McLauchlan’s charge down try in the first of four tests in 1971 proved crucial for the Lions as they grabbed kicked-off the first series victory on New Zealand soil. Masterminded by coach Carwyn James, that triumph remains the only series success by the Lions against the All Blacks.

The Lions also found Otago a tough nut to crack at Carisbrook and went down to five defeats there ontour, including a run of three successive beatings in 1950, 1959 and 1966. The last game the Lions played at Carisbrook was against Otago on 18 June, 2005, when they won 30-19.

That game saw Wales skipper Ryan Jones make a spectacular debut after arriving earlier in the week as a replacement back row forward. He scored one of the three tries and went on to play in all three Tests. he will, of course, be back at the venue for its final test outing this weekend when he leads Wales in search of a first win over the All Blacks in New zealand – and a first against them since 1953.