Two of the biggest heroes of England's win over the Wallabies could face the New Zealand Maori on Wednesday. [more] 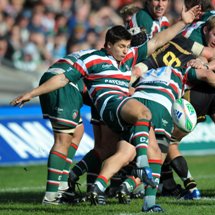 Two of the biggest heroes of England’s win over the Wallabies could face the New Zealand Maori on Wednesday.

Leicester scrum-half Ben Youngs and Northampton wing Chris Ashton were England’s try scorers in the historic 21-20 triumph in Sydney on Saturday and the duo could be called into action again in Napier.

Former Lions skipper Martin Johnson has named a squad of 28 players for the clash with the Maori, with six members of Saturday’s starting line up included.

Full back Ben Foden, lock Courtney Lawes and props Dan Cole and Tim Payne join Youngs and Ashton in the initial squad, with Johnson set to announce his 22 on Tuesday.

England have concerns over the fitness of Bath centre Olly Barkley who is struggling with a hamstring injury, leaving Brad Barritt, Dominic Waldouck and Shane Geraghty to fight it out for the No12 shirt if Barkley fails to recover.

England go into Wednesday’s encounter in confident mood on the back of just their second away win of Johnson’s tenure but the Maoris will be in high spirits too after they celebrated their centenary with a thrilling 31-30 win over Ireland on Friday night.