The 1989 Lions were the first to visit Australia since 1971, the first to play more than two games in the country since 1966 and only the second ever Lions side to use Australia as their sole destination. Only the Reverend Matthew Mullineux's tourists 90 years earlier had toured Australia without venturing to New Zealand. [more] 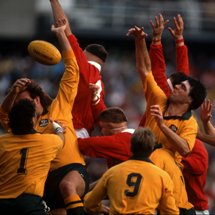 The 1989 Lions were the first to visit Australia since 1971, the first to play more than two games in the country since 1966 and only the second ever Lions side to use Australia as their sole destination. Only the Reverend Matthew Mullineux’s tourists 90 years earlier had toured Australia without venturing to New Zealand.

With this in mind, it was perhaps hardly surprising that there were plenty of doubters ahead of the ’89 adventure.

Australian Rugby had really struggled during the 1970s but the Grand Slam tourists of 1984 had shown that the Wallabies could challenge the more established nations.

Critics questioned whether Australian Rugby had the infrastructure or the depth of talent to host a Lions tour but the country proved them wrong. They proved their worth against the Lions, playing a full part in one of the most competitive Test series in living memory.

The Lions may have won all eight of their non-Test fixtures but they were convincingly beaten in the first international in Sydney.

Sir Ian McGeechan’s men were on the wrong end of a 30-12 hammering as an Australia side featuring the likes of David Campese, Nick Farr-Jones and Michael Lynagh showed the quality that would see the Wallabies crowned World Champions two years later.

But that defeat only spurred the Lions on to create history of their own. The ’89 Lions bounced back to win the next two Tests and claim a 2-1 series triumph.

This was the first time since 1899 that the Lions had lost the first Test against any opposition but come back to win the series. No Lions side has yet matched that achievement, although the class of 2009 did come close.

The second-Test win in Brisbane – commonly referred to as the ‘Battle of Ballymore’ – will live long in the memory for its sheer ferocity, while the third-Test triumph back in Sydney has few rivals for sheer drama.

With the series tied at one-apiece and the Wallabies holding a narrow lead early in the second half, Campese experienced a moment of madness. One of the game’s most-instinctive players, the Wallaby wing wonder attempted to run the ball out from behind his own tryline before throwing a speculative pass to Greig Martin. The Australian full back could get nowhere the ball and Ieuan Evans pounced to score what would be the match, and series, winning try.

Campese was mercilessly pilloried in the Australian press, while the Lions were left with plenty to celebrate.

A little bit of history

In the year that the Lions returned to Australia for their first proper visit since 1966, Queen Elizabeth II was 37 years into her reign and had already become the third longest-serving monarch in British history; George Bush had just taken over from Ronald Reagan as US President; Theo Walcott, Ben Youngs and Dan Biggar were born but Samuel Beckett, Sugar Ray Robinson and Done Revie all died; the Berlin Wall began to fall; Romanian dictator Nicolae Ceausescu was executed; the Hillsborough Disaster claimed the lives of 96 football fans; China witnessed the Tiananmen Square Massacre; Poland elected its first non-communist president and Hungary declared an end to communist rule; England experienced its hottest summer in 13 years and Frank Bruno was knocked out by Mike Tyson in the fifth round of their Heavyweight title clash.

The Lions arrived in Australia seven years after Melbourne hosted the Commonwealth Games; five years after Advance Australia Fair was proclaimed as Australia’s national anthem; three years after all remaining rights for the UK Parliament to pass law in Australia were removed; a year after the country celebrated its bicentenary and the same year that an earthquake in Newcastle near Sydney killed 13 people.

The Lions played two more games after the three-match Test series – something that hasn’t happened in the five tours since.

The first of those games was a 70-point thrashing of New South Wales Country but the second was a far tighter affair.

The Lions beat an Anzac XV 19-15 in Brisbane but the side they faced was much weaker than the fixture managers had anticipated.

The Anzac XV was supposed to be a Barbarian-style side combining large numbers of All Blacks and Wallabies but, in the end, the New Zealanders refused to fully support the concept.

A total of 12 All Blacks dropped out of the squad and only one of the three who did turn up was a current international.

Mike Teague was rightly named the player of the tour after a fantastic individual contribution on his first Lions adventure.

Teague had made his England debut back in 1985 but had drifted out of contention until he became an ever-present for his country in the 1988/89 season.

Having missed the first Test defeat with a shoulder injury, Teague started both the second and third internationals as the Lions turned things around.

Widely considered to be one of the central figures in the Lions’ change of fortunes, Teague led by example as the tourists took the final two Tests to the Wallabies, never taking a backward step and dominating the physical exchanges.

The 1989 Test series was a particularly physical affair

The Lions took a squad of 30 players to Australia in 1989 and called up two replacements while on tour.

England’s Rob Andrew and Tony Clement of Wales joined the party Down Under, but despite the ferocity of some of the rugby, no forward replacement was called upon during the six-week tour.

Much was made of possible tensions between the English and Scottish contingent but any national rivalries were put aside thanks in no small part to the ‘one for all and all for one’ attitude of captain Finlay Calder.

The Scottish back rower was an inspiration on his first and only Lions tour, six years after his twin brother Jim toured New Zealand with Britain and Ireland’s elite.

Calder was among nine Scots in the party, with England providing 11 players, Wales eight and Ireland four.

For the first time, the Lions took two coaches, with Roger Uttley assisting Sir Ian McGeechan. They also took an official team doctor and a physiotherapist, with Clive Rowlands heading the party as tour manager. The tour was the first of McGeechan’s five as a coach, following on from his two as a player.