Brian O'Driscoll's 13th international outing against Australia didn't end up being a happy won as his Irish side went down to a 22-15 defeat in Brisbane. [more] 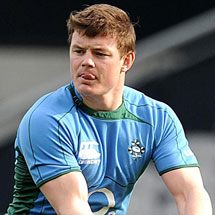 Brian O’Driscoll’s 13th international outing against Australia didn’t end up being a happy won as his Irish side went down to a 22-15 defeat in Brisbane.

Defeat also meant the 2009 Grand Slam champions’ recent losing run extended to five games. It began with their RBS 6 Nations defeat at Croke Park by Scotland and then they were beaten in Limerick by the Barbarians in an uncapped game.

The opening game of their summer tour ended with a record 66-28 reverse against the All Blacks and last week the New Zealand Maori piled on the agony with another defeat in an uncapped fixture.

Leinster outside half Jonny Sexton kicked all 15 points for the Irish and his perfect five from five kept his side in touch in a first-half that saw Aussie scrum half intercept a back row move from the visitors 30 metres out and sprint away for a try that helped his side lead 16-15 at the break.

A moment of dazzling brilliance from Wallaby outside half Quade Cooper opened up the Irish defence in the second half for a second try, but the game remained in the melting pot right until the end.

Rhys Ruddock, the son of former Wales Grand Slam coach Mike Ruddock, became the fourth new Irish cap on the tour when he came on in the second half and Irish captain Brian O’Driscoll admitted it had been a harsh learning curve for his players.

“We will take a lot out of the trip and hopefully be better for it. Four new caps on the tour and it has been a learning curve,” said O’Driscoll.

“We wanted to put a bit of pride back into our defensive game and apart from a couple of lapses it was pretty good.”