The Australian rugby community was rallying around former Wallabies hooker Brendan Cannon and his wife Fiona at the weekend after a terrible accident at home left their 16 month son in a critical condition. [more] 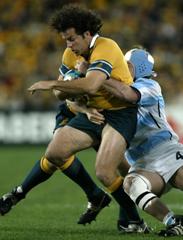 The Australian rugby community was rallying around former Wallabies hooker Brendan Cannon and his wife Fiona at the weekend after a terrible accident at home left their 16 month son in a critical condition.

Samuel had been playing with his mother in the back garden of their Brisbane home when he suddenly ran over to the car after seeing his five-year-old brother Joseph and three-year-old sister Phoebe getting into their Dad’s four-wheel drive.

As Cannon reversed out of his driveway he accidentally reversed over Samuel, fracturing both his legs and causing internal injuries, including a laceration to his liver. He was taken to the Royal Children's Hospital in Brisbane, where he was described as being in a critical but stable condition on Sunday.

Cannon, 37, won the first of his 42 Australian caps against the British & Irish Lions in 2001. Having already helped Australia A beat Martin Johnson’s men, and then also faced them with New South Wales, he came on as a replacement in the 35-14 victory in the second Test in Melbourne that squared the series.

He was an unused replacement in the decisive third Test in Sydney, when the Wallabies won to clinch the series. He then went on to become first-choice hooker at the 2003 Rugby World Cup and started against England in the final.

“We know he is in the best place possible to recover. We've been overwhelmed by the support and actions of the doctors and nurses at the Royal Children's Hospital, I cannot praise them enough,” the Cannons said in a statement on Sunday.

“Given the circumstances, this is obviously an extremely trying time for our family. We would like to thank and acknowledge the support and well wishes we have received from all corners of the globe from our friends and the wider community.”

Another former Wallaby hooker, Phil Kearns, was involved in a similar incident at his home in Sydney in 2005, when he accidentally ran over his daughter Andie. She has since made a full recovery.