The All Blacks powered to their second bonus point victory over the Springboks as they took a firm grip on the 2010 Tri-Nations. [more] 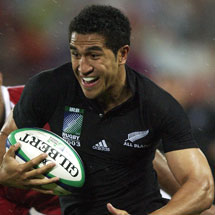 The All Blacks powered to their second bonus point victory over the Springboks as they took a firm grip on the 2010 Tri-Nations.

Their 31-17 triumph at the Westpac Stadium in Wellington followed on from their 32-12 victory in Auckland a week earlier and tries from Ma’a Nonu, Mils Muliaina, Rene Ranger and Israel Dagg ensured they made it a maximum 10 points from their two opening games against the reigning champions and World Cup holders.

First half tries from Nonu and Muliaina gave the All Blacks a 13-7 lead at the interval, but a Morne Steyn penalty in the opening minutes of the second half brought the visitors back to within three points.

Lock Danie Rossouw was both hero and villain for the Springboks in the first half as he picked up a needless yellow card for a scuffle with Richie McCaw before making amends with a try just before the break.

It was while Rossouw was in the sin-bin that Nonu struck for the opening try, while veteran full back Muliaina raced in from 40 metres after Piri Weepu had capitalized on a loose kick through by his opposite number Rickie Januarie.

It was just as well for the Boks that Dan Carter found the swirling Wellington wind difficult to master – he missed with four kicks at goal and made way for Weepu in the second half – because the home side’s initial 13-0 lead could have been 20 points.

Just as they had done in Auckland, the Boks rallied around the interval, but while Steyn’s penalty gave them some hope, they were unable to match the physicality of the New Zealanders.

A try on the left wing by Ranger, deputising for the injured Joe Rokocoko, reaffirmed the ascendancy of the home side and replacement full back Dagg rounded off another great night for the 2011 World Cup hosts.

A try from Schalk Burge was no more than a consolation for John Smit’s men who now heads to Australia for the third game in their defence of the Tri Nations title.