Shock and awe from the All Blacks

With 15 months to go to the 2011 Rugby World Cup would anybody now bet against the All Blacks following their destruction of Australia in Melbourne. [more] 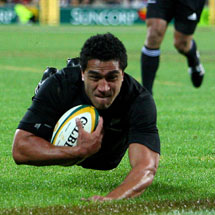 With 15 months to go to the 2011 Rugby World Cup would anybody now bet against the All Blacks following their destruction of Australia in Melbourne.

Their third successive bonus point victory in the 2010 Tri-Nations means the title is virtually in the bag at the half-way mark and their 49-28 triumph made it 12 wins in a row for Richie McCaw’s men.

But what made the latest victory all the more impressive was the way in which the All Blacks took the Wallabies’ early salvo on the chin and responded immediately. Then, after going down to 14 men, they hit back with a try and secured their bonus point with a fourth try after only 35 minutes.

“Shock and awe” rugby, was the way in which the New Zealand Herald described the performance and it is hard to see anyone denying them the title. This was Australia’s eight successive defeat at the hands of their biggest rivals and that number looks set to rise to nine next weekend in Christchurch when another All Blacks victory will assure them of the title with two games left to play.

Rocky Elsom’s Aussies, who are not only gearing up for the World Cup next year, but also to receiving the British & Irish Lions in 2013, it promises to be a tricky week.

They lost try scoring wing Drew Mitchell to a red card, after Craig Joubert issued him with two yellows, and after the game their young centre Rob Horne was diagnosed with a fractured elbow.

But as brave as they were when reduced to 14 men – Mitchell was penalised for two reasonably innocuous offences, a dangerous tackle and then knocking the ball out of the hands of an All Black – they had no answer to New Zealand’s all action approach.

Even though the home side did their best to rattle their old foes at the start, they were never able to fluster the All Blacks. An early Matt Giteau penalty was followed by a brilliant charge down try by Mitchell and the home crowd was filled with hope.

Yet no sooner had Dan Carter been embarrassed by Mitchell’s charge down of his kick out of the 22, than he made amends – in the very next passage of play. The All Blacks re-started to the home 22, the Wallaby forwards tidied up, but Giteau opted not to kick out of his 22 and give that job to Berrick Barnes.

As he shaped to kick from his 22, so Carter pounced, charged down the kick and re-gathered to score a try which he also converted. That response, coupled with the try from McCaw when his side ha just lost prop Owen Franks to the sin-bin, epitomised the mental toughness and competitive nature of the New Zealanders.

There were two tries for veteran full back Mils Muliaina, one each from wings Cory Jane and Joe Rokocoko and another from replacement prop Corey Flynn, while Carter plundered 19 points in the match.

It was 32-14 at the break, but at least the home side demonstrated some steel in the second half despite losing Mitchell early on. In fact, the second half ended up 17-14 to the visitors as Adam Ashley-Cooper and the skipper Elsom crossed for home tries.

It will need more, much more, of that second half spirit to end their losing run against the All Blacks on Saturday and, with the recent demise of the world champion Springboks, can anyone stop New Zealand’s march to their moment of destiny on home soil next year?

In 1987, David Kirk’s All Blacks were able to win the World Cup in their own backyard but, since then, the title has gone everywhere else other than New Zealand. The pressure is definitely on coach Graham Henry and his brilliant captain McCaw to deliver the goods in 2011 and, at the moment, they appear to be relishing the high levels of expectancy.