Double trouble for All Blacks

The All Blacks will be seeing double when they take on the Wallabies in Christchurch this weekend as Australian coach Robbie Deans has chosen the Faingaa twins to make their first start together. [more] 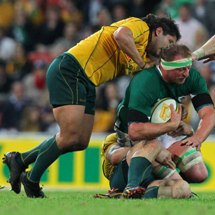 The All Blacks will be seeing double when they take on the Wallabies in Christchurch this weekend as Australian coach Robbie Deans has chosen the Faingaa twins to make their first start together.

The Queanbeyan-born brothers, who became the 40th set of brothers and third set of twins to play for Australia when they came off the bench against the All Blacks last Saturday, are among the four changes made from the side beaten 49-28 by the All Blacks last weekend.

Anthony Faingaa has been given the task of shackling Ma’a Nonu in the centre and spoiling his 50th cap celebrations, while Saia Faingaa packs down at hooker to win his sixth cap.

It was the Ella twins back in the eighties who were the last set of twins to pull on the green and gold jersey of Australia and if the Faiingaa’s younger brother Colby, who has already played at flanker for Australia Under 20 and is in the Brumbies Super 14 squad, can continue to make strides then they could make it a family hat-trick.

Anthony and Saia were both in the Australian Under 19 team that beat New Zealand in the IRB World Championship final a few years ago and among the long term goals for the family trio now are to play in the World Cup next year and then face the British & Irish Lions on their 125th anniversary tour to Australia in 2013.

Anthony comes in at centre in place of Berrick Barnes, while Saia replaces Stephen Moore in the middle of the front row. Barnes and Moore have both been dropped to the replacements bench, while Adam Ashley-Cooper moves from full back to centre to fill in for the injured Rob Horne.

Kurtley Beale will wear the No 15 jersey and Cameron Shepherd will be hoping to bridge a two year gap in the international wilderness by coming onto the field off the bench during the game. Drew Mitchell, who was sent off for two yellow card offences in Melbourne last weekend, retains his place in the side after escaping further punishment.

But all eyes will be on the twins as they try to halt the All Blacks making it a record equaling nine wins in a row over their arch-rivals – and clinching the Tri-Nations title and Bledisloe Cup into the bargain.

There wasn’t a dry eye in the Faingaa household when Deans announced his side and Saia is delighted that his 'best mate' has caught him up.

"I know our family's proud of what we've achieved so far. Dad was crying, Mum was crying and I think my little brother was crying as well,” admitted Saia.

“I just can't wait to get out there and not only represent my country, but represent my family. To have my twin brother and my best mate to do it next to me is going to make it a great moment for our family.”