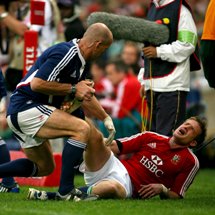 Lions wing Luke Fitzgerald is expected to finally return to action this weekend.

The Irish youngster has been out of action since November but is in line to feature in Leinster’s pre-season friendly against Wasps.

Fitzgerald started the second Test for the Lions against the Springboks last summer having won the 2009 Grand Slam in his first season as a regular international starter.

He returned from South Africa hoping to press his claims as one of Europe’s leading wings but suffered a substantial setback when he tore knee ligaments in Ireland’s autumn clash with Australia.

The 22-year-old missed the remainder of the season, sitting out 13 Magners League games, four Heineken Cup pool ties plus the quarter and semi-finals, Ireland’s historic win over South Africa and all five Six Nations games in 2010.

Fitzgerald also missed Ireland’s summer tour to Australia and New Zealand but looks set to feature on Friday night when Leinster welcome a Wasps side that could include a host of Lions team-mates to Donnybrook.

Fellow Ireland internationals Sean O’Brien and Fergus McFadden are also named in the Leinster squad after injury, as is second row Devin Toner.